The snow falls lightly in Dettah, N.W.T., covering the steps leading up to Henry Beaulieu's two-bedroom unit, where he's lived with his wife for the past 22 years.

Once, their six children lived there as well. But they grew up and moved away, as children do.

Beaulieu said he feels strongly that if his First Nation — the Yellowknives Dene — had developed the vast area around Dettah to build homes for its members, his kids and his grandchildren would still be there.

"If I had my own home, none of my children would be leaving … if they had houses built," he told CBC Radio's The House.

Beaulieu and his wife live in a public housing unit, owned and maintained by the housing division of the Yellowknives Dene First Nation (YKDFN). 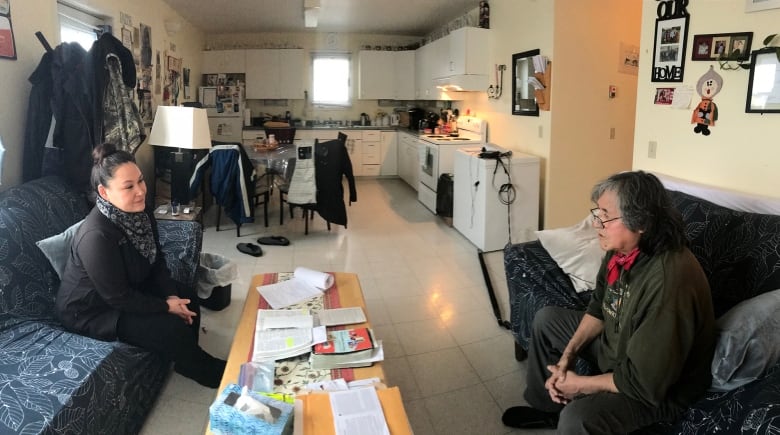 Henry Beaulieu and CBC's Juanita Taylor sit in the living room of his public housing unit. Beaulieu has been living in the house for 22 years. (Joanne Stassen/CBC )

The YKDFN is now working with Indigenous Relations and Northern Affairs Canada and the territorial Housing Corporation to see if it can access some of the $60 million put aside for the territory under the National Housing Co-investment Fund to build its own affordable housing as an unsettled First Nation.

Chief Ernest Betsina said the First Nation has a vision for a better community in Dettah and its sister community of N'dilo.

"We want to be strong, for our people to be born, to be raised and basically live their whole life with the YKDFN and to contribute to the First Nation, to our dreams," he said.

Betsina said a lack of adequate, affordable housing is standing in the way of that.

The fund is meant to help Indigenous communities in the N.W.T. — but because it's not based on a reserve, the YKDFN fears it might not meet the criteria. 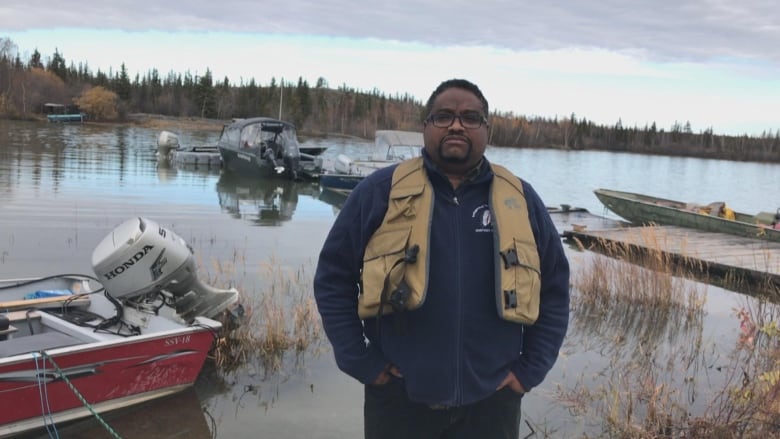 Jason Snaggs, CEO of YKDFN, said that if the federal government sincerely wants to improve its nation-to-nation relationship with First Nations, prioritizing Indigenous-led housing initiatives would be a good way to do that.

"For the Yellowknives Dene First Nation, it's a form of taking back its sovereignty and its independence when it comes to housing," he said. "Successive governments have tried to more or less exert their control over the First Nation by saying, 'We are going to provide housing for you.'"

Snaggs said the houses provided by the federal government were built to southern standards, making them inefficient and costly to maintain.

"Our goal is to build houses that reflect the tradition and culture of the First Nation," he said.

Beaulieu's home is plagued by flaws. The floor tiles are cracking because poor construction causes the house to shift, he said. 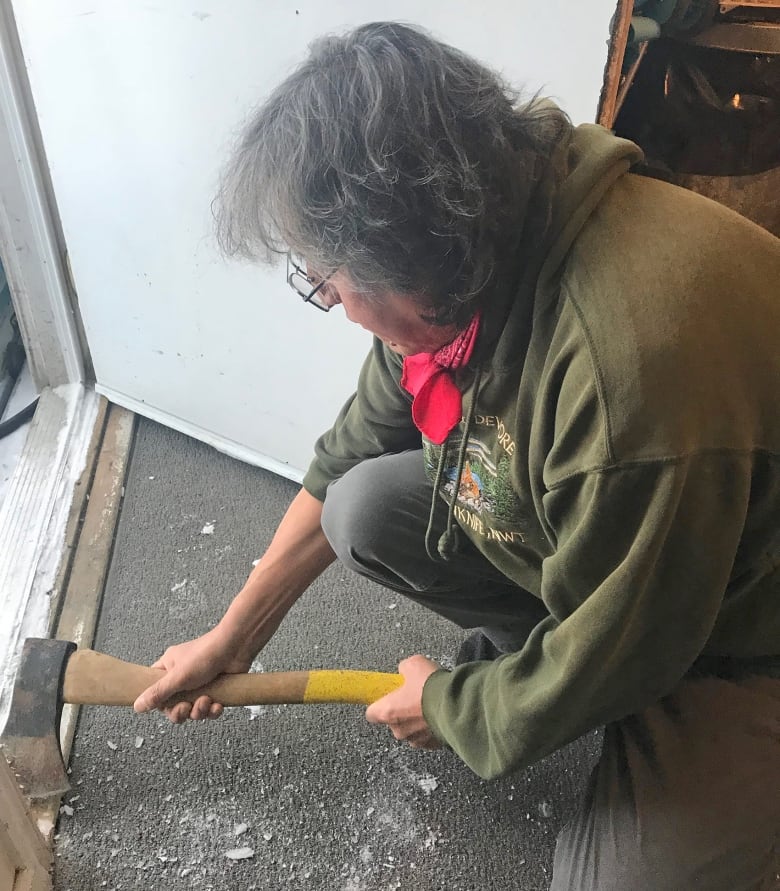 Henry Beaulieu uses an axe to chip away ice around the door frame of his house. (Juanita Taylor/CBC)

"It's not very good. It's pretty drafty. There's a gap, eh? That's where the wind comes in and I have to scrape the ice off the edge of the door all the way down and the latch," he said, adding he's had to use an axe to chip the ice away.

Despite the need for repairs, Beaulieu said he would really like to call the house his own. 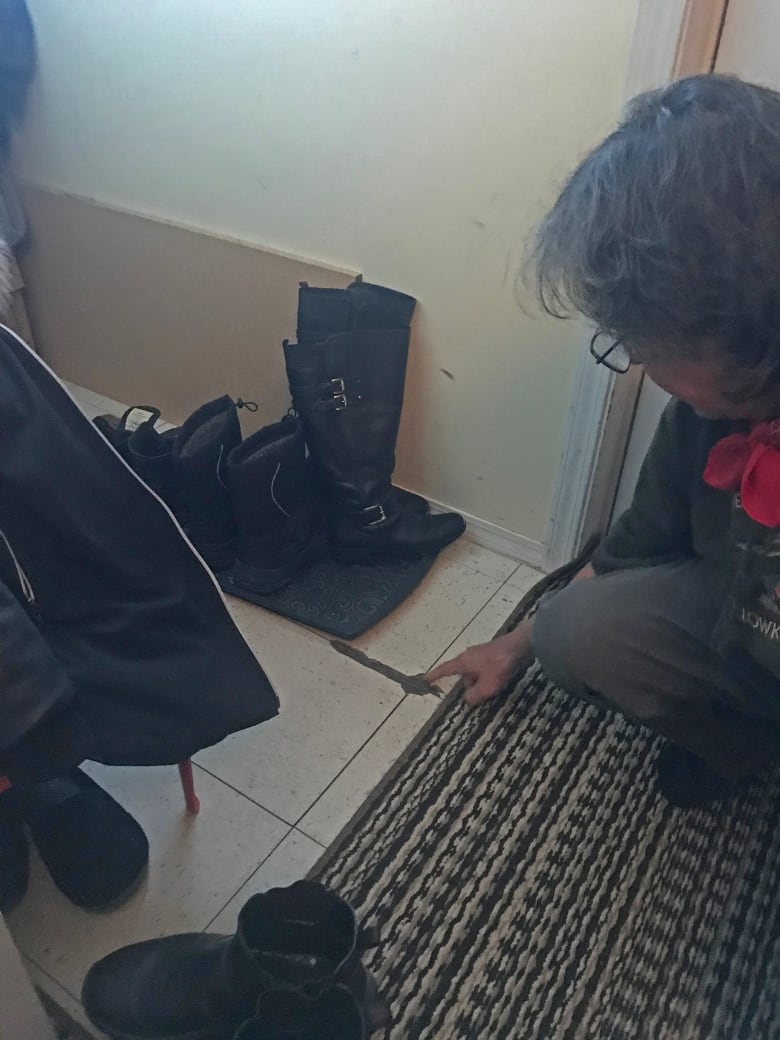 Dettah, N.W.T., resident Henry Beaulieu points to the chips in his flooring caused by the house shifting. The public housing unit has been facing challenges in the maintenance of its homes over the years. ( Juanita Taylor/CBC)

"I'm a band member owning this land. Under our treaty we're entitled to free housing — and here we're paying rent," he said.

"I'd like to have this place rent-to-own, under our Treaty that was signed on July 25, 1900 in Fort Resolution, N.W.T. We're entitled to free housing. Transfer ownership to me because they're not fulfilling their treaty obligation."

Betsina and Snaggs said their housing strategy would address concerns they've been hearing from members of the First Nation. 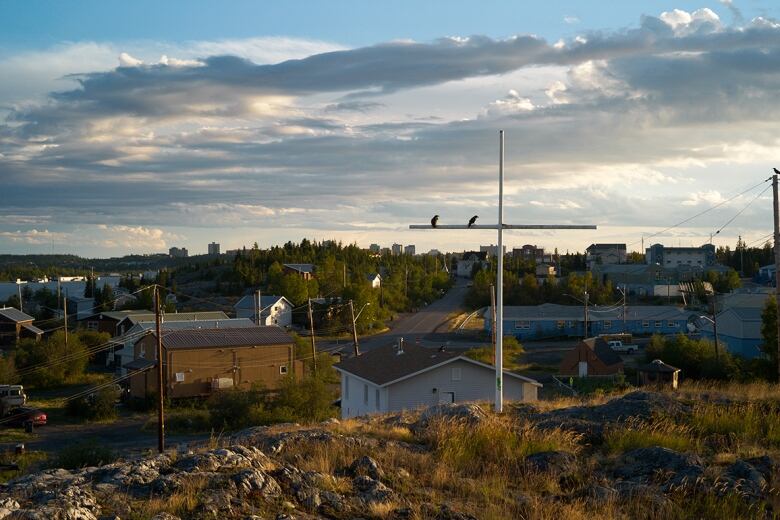 A view of N'dilo from a rocky hill, with Yellowknife in the background. (Walter Strong/CBC)

Beaulieu said he thinks First Nations and other orders of government should pursue a territory-wide solution.

In the meantime, Beaulieu said, he'll keep chipping the ice away from his door frame.

"The only thing I could do now is just read my Bible and ask the good Lord to bless my house, to bless my wife and bless everything that's here, what God has given us. Be content with it and be happy," he said.

"And hopefully the YKDFN and its housing division, and [the Canada Mortgage and Housing Corporation] and [the] federal government and lands department can work together."

Mourinho on the double Ntombela: He's very creative. One of those who knows how to sharpen the game
Atalanta and Sevilla have agreed on the transfer of Gomez. The midfielder will fly to Spain on Tuesday
Laporta on Messi at PSG: I read that they have losses. We need to discuss what deals they can afford
PSG offered Ramos a contract for 45 million euros for 3 years (Onda Cero)
Nacho tested positive for the coronavirus. He was in contact with the patient earlier
Bale scored in the FA Cup for the first time since 2013. He has 4 goals in 13 games at Tottenham
Frank Lampard: I didn't have enough time to take Chelsea to the next level
Source https://www.cbc.ca/radio/thehouse/yellowknives-dene-first-nation-housing-1.5818157?cmp=rss

Keira Knightley has no interest in filming sex scenes for men

No. 8 Virginia blows past Syracuse

Letters to The Sun, Jan. 26, 2021: Democracy may be attacked, it may be shaken, but when the people stand up it will never be taken

Shut down borders to protect against variants: Ford

COVID-19: Vancouver man fined $2,500 for makeshift nightclub out of condo

Stu Cowan: What a difference a year makes for the Canadiens

Blues look to end uneven efforts with set at Vegas

U.S. Senate expected to confirm Blinken as Secretary of State on Tuesday

Class-action lawsuit launched against TransLink for data breach in December

NBA postpones Spurs at Pelicans game due to COVID-19

‘MISSED MILESTONE’: Dad-to-be wants hospital to allow him to go to appointments

Virtual Winterlude lets everyone across Canada join in the fun

Clemson looks to get back on track vs. No. 25 Louisville