Rural Ontario politician Randy Hillier is no stranger to controversy.

For much of the pandemic, the Lanark–Frontenac–Kingston MPP has taken to social media to voice his displeasure with the province’s handling of COVID-19,, questioning the effectiveness of masks and lockdowns.

Near the end of December, a Kingston-area physician penned a letter to Hillier disputing his COVID-19 claims.

After over 40 local doctors called on Hillier to stop spreading “misinformation” about COVID-19 and putting his constituents at risk, the independent politician has continued his behaviour online — until Saturday.

“We must start shaming those who wear a mask, as they shame others, the masks are coercing us to live their lie. I will not do it, join me in a crusade of honesty, not their March to tyranny. Boycott stores, politicians who lie, do not bear their false witness,” wrote Hillier in a tweet late Thursday night. 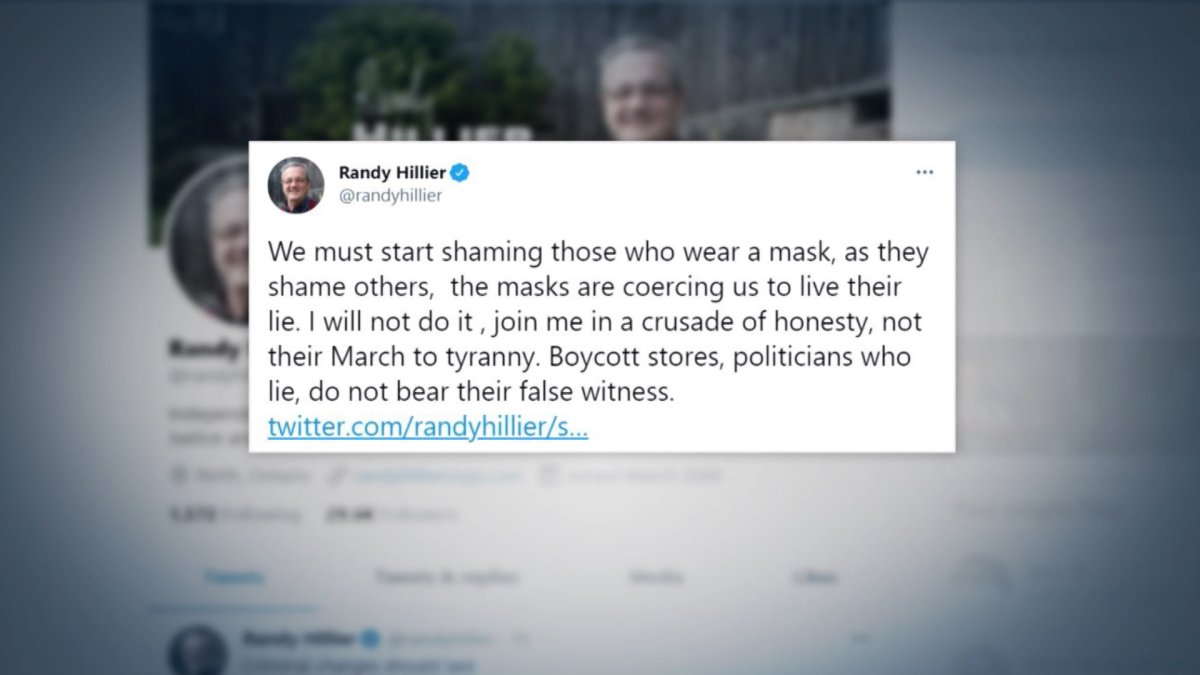 On Sunday, Hillier was back online, tweeting, “I’m Back! Thanks for all the support.”

“The trolls and bots got a workout yesterday reporting me. To appease the unruly mob Twitter put me in time out. I’m recharged and ready for more.”

That’s exactly what appears to have done, tweeting several disparaging tweets about public health and the Ford government.

So, what happens now for the former PC party member?

This comes with a five or more strike limit:

Twitter says it has removed more than 8,400 tweets and challenged 11.5 million accounts worldwide.

“If you’re lying to the public, you should be held to account,” said Jesse Miller, a social media educator.

Miller, the founder of Vancouver-based Mediated Reality, says Hillier’s recent tweets have likely garnered a high number of complaints and reports to twitter, resulting in a temporary suspension.

It’s unclear how many strikes Hillier has because of the newly rolled out guidelines, but if his COVID-19 rhetoric continues, Miller says, it will likely lead to a permanent suspension.

“Twitter does take those responses and does analyze them, and if they can see that a person’s tweet is receiving twenty, thirty thousand review requests, that does come down to how they’re being held to account in that space,” said Miller via Zoom.

Hillier’s social media posts have caused a stir — both in support and opposition.

Dr. Michelle Cohen, a family physician in Brighton, Ont., has been reacting to Hillier’s tweets in the hopes to steer people away from “misinformation.”

So whoever plans to run against Randy Hillier in 2022 is keeping track of all his horrible tweets, right? Right? pic.twitter.com/jv84y8Iwse

Cohen says the hyper-politicized pandemic south of the border has bled into Canada, and many Canadians feel they have to take a side.

“I would just encourage people to listen to the science, follow the science, read up on the science and be skeptical about the political leanings,” said Cohen via Zoom.

She went on to say that the public should be wary of COVID-19 information that goes against the scientific consensus.

Real Madrid players will refuse bonuses for winning the Champions League or La Liga. The club will save 30 million euros
Zinedine Zidane: I was lucky to coach Real Madrid. But I'm not a terrible coach, although not the best
Sweden has opened stadiums for fans, but so far only 8 (!) people can attend matches. Although in other places go to 5 thousand
Ronaldo will miss the match with Atalanta due to a muscle injury
Arsenal, Lazio and Wolverhampton are Interested in Yaremchuk. Gent wants 15-20 million euros for their top scorer
Bayern are set to extend their contract with Choupo-Moting. The striker wants to play regularly
Yaya Toure: I want to work as a coach in Barcelona. I was very much loved there

Felix Silla, Cousin Itt from ‘The Addams Family’, dead at 84

‘IT SENDS A TERRIBLE SIGNAL’: Canada’s naked MP speaks out on leaked photo

Man tied up and locked in storage room in Calgary home invasion: police

Karl Lohnes: Take the heat outside for cooking and entertaining

Josh Freed: The great outdoors has become our COVID salvation

Prince Philip to be honoured for 'courage, fortitude and faith' at funeral

The Order of Service for the funeral of Prince Philip, Duke of Edinburgh, in full

Latest updates: Philip's coffin in Inner Hall ahead of funeral

While you were sleeping: Let's pause for a moment to celebrate the Parc Ave. cats

Pellerin: Don't hide behind arguments over freedom when you flout COVID rules

Prisoners in Myanmar pardoned by military junta, unclear if protesters among them

Funeral to praise Philip's 'courage' and support for queen

Over 3 million people have now died of COVID-19 worldwide

Bulls searching for a spark against Cavaliers

The Mayors: High-frequency rail service from Québec City to Toronto is a sustainable economic recovery project

Motor racing-Spanish Formula One GP will go ahead without spectators

On the front lines of Mile End's chicken war

Kathryn Marshall: Sharing photo of naked Liberal MP was no joke — an apology is owed

Playing Russian roulette with COVID-19: How fatigue, frustration are affecting some mindsets

‘We can’t heal if we don’t have answers’: A year after Canada’s largest mass shooting, agonizing questions remain

Quebec vs. ROC: We’re faring better in the third wave