A Peterborough-area woman faces charges in relation to an incident in which a horse was dragged by a vehicle.

Last week videos circulating on social media, and obtained by Global News Peterborough, show a horse being bragged behind a vehicle. It’s not known where or when the incident occurred or what type of vehicle was involved.

A woman is heard on the video saying, “Good girl.”

In another video clip, blood is on the ground next to the same mare. A woman’s voice says, “Awesome, fantastic.”

Northumberland OPP late last week said they and the Ontario Society for the Prevention of Animal Cruelty (OSPCA) were investigating.

A still frame of video of a horse being dragged by a vehicle. A woman has been charged in the incident. Facebook video

On Monday, police directed inquiries to the Ministry of the Solicitor General. Ministry spokesperson Brent Ross said an investigation has led to one person being charged.

Solstice Pecile, 23, of Cavan-Monaghan Township, was charged with causing distress to an animal under Section 15 (1) of the Provincial Animal Welfare Services Act.

She was released and is scheduled to appear in court in Cobourg on Jan. 11, 2023. 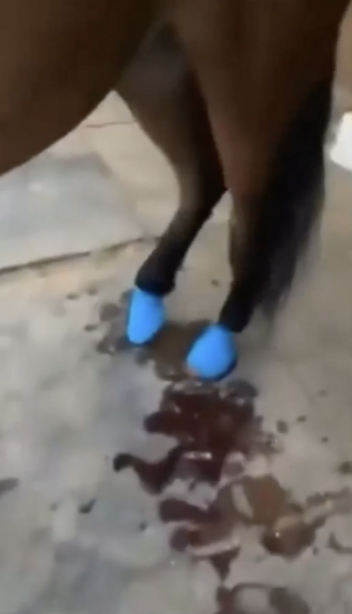 A still frame of video of a horse bleeding. A woman has been charged in connection with the incident. Facebook

“Given this matter is now before the court, it would be inappropriate to provide further detail,” Ross stated in an email to Global News Peterborough.

The Canadian Pony Club in a statement says the charges involve one of its members.

“Pony Club does not condone of support the mistreatment of any animal and we take the allegations seriously,” the club stated. “At this time we are suspended their Pony Cub membership pending the outcome of a non-biased third, party investigation.”

The five-year-old mare named Ezra has been returned to its original owner.

Emily Reardon says she had recently sold the horse due to “unforeseen circumstances” but learned of the incident and has made arrangements to buy her mare back.

She has launched a GoFundMe page to help cover the costs of travel, veterinary attention and more.

“Ezra is only five years old and has been through a lot in the last few months and I am so grateful I’ve managed to find her and get her back,” she said. “She will be getting all the love, attention, and treats she deserves.”

Grizzlies, other NBA teams speak out on Tyre Nichols’ death

Cal out for sweep, while Stanford eyes fourth straight win

Natural gas prices down, electricity up in Alberta in February

Ride-hailing available in Vernon, B.C. for the first time

Woman in groping case with former lawmaker speaks out

City of Penticton, B.C. asking residents to fill out survey on public transit

Two B.C. women sentenced to more than 20 days in jail for protesting pipeline

1 person taken to hospital after assault on Toronto bus: police

No. 9 Kansas hopes to stop the bleeding in marquee tilt at Kentucky

‘Important time’ for Oklahoma State back home vs. Ole Miss

Man, 34, found dead on side of road in Nanaimo

Letters to the Sun: Canucks should wear paper bag over Boudreau firing

Future REM shouldn't be on elevated track in Mercier-Est: report

WARMINGTON: Time for the Guardian Angels to spread wings in Toronto?

Measuring success: There's no agreement on how to decide whether drug decriminalization works

‘Proud to say I am a fat person’: Calgary actors draw attention to weight bias

Released video shows Tyre Nichols being held down, hit by Memphis, Tenn., police as he screams for his mother

Released video shows Tyre Nichols being held down, hit repeatedly by police as he screams for his mother

Video shows Tyre Nichols being held down, hit repeatedly by police as he screams for his mother

Alberta budget set for Feb. 28, with focus on funding for health, school growth

Events in the Memphis police beating death of Tyre Nichols

One in four Canadian cancer patients has untenable gaps in treatment

Is Canada’s military ready for the challenges ahead? ‘No,’ says defence chief

2 people charged in connection with homicide at north Edmonton home

Jesse Kline: Horrific terror attack in Jerusalem a failure of the Palestinian Authority

Pete McMartin: Searching for that inner child at play