There are more than 1,500 vacancies in the RCMP in B.C. because of hundreds of unfilled positions and officers on leave, Postmedia has learned.

That is a vacancy rate of 20 per cent for the RCMP’s authorized strength of about 7,100 in British Columbia.

New B.C. Premier David Eby announced last week $230 million for the RCMP over three years to add another 277 officers and bring RCMP provincial policing services up to an authorized strength of 2,600. Provincial services cover highway patrols, policing in small communities and special teams such as the major crimes section and the sexual exploitation of children unit.

But that is only part of staffing shortfall picture for the RCMP in B.C.

There are another 242 positions that are also unfilled in other RCMP services areas, including municipal and federal policing, for a total of 519, according to numbers provided by the RCMP.

And there are another approximately 1,000 officers that are on some type of leave that include maternity and paternity leave, short and long-term sick leave due to illness and injuries, suspensions and leave without pay.

These are called soft vacancies, which the RCMP note fluctuate.

Despite the 20 per cent vacancy rate, the head of the RCMP in B.C., deputy commissioner Dwayne McDonald, said staffing shortfalls are not affecting community safety or the ability to carry out required basic policing, including responding to 911 calls.

“We have not fallen below the standard of adequate and effective policing, but what it does do is put pressures on those officers that are carrying extra workload,” McDonald told Postmedia.

And it will drive up overtime budgets and affect services such as community policing offices, which provide information on crime prevention and safety in neighbourhoods, and are not part of the RCMP’s core services, he said. 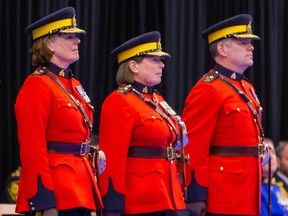 Policing has been in the spotlight in British Columbia, most recently with a move by a newly elected council in Surrey to halt the transition to a municipal force away from the RCMP. The move to a municipal force in Surrey was approved in 2020 by the province and is well underway, with more than $108 million spent and more than 300 officers hired.

Staffing levels and costs are among the issues under debate, and a RCMP report on how to maintain their services in Surrey is on the city council’s Monday agenda.

Earlier this year, an all-party legislative committee looking into systemic racism in policing recommended B.C. shed the RCMP in favour of a provincial police force and the creation of regional municipal forces including in the Victoria area and Metro Vancouver.

Ontario and Quebec have provincial police forces and Alberta is considering switching to a provincial force from the RCMP.

But following the $230 million announcement, B.C. Public Safety Minister Mike Farnworth said the RCMP will be providing police services in a significant part of B.C. for a “considerable amount of time.”

RCMP officials say factors affecting staffing levels and vacancies include attrition, retirement and lower than usual recruitment due to a declining interest in policing.

McDonald noted the COVID-19 pandemic also had an effect with less recruits being able to be trained.

He also pointed to social and political movements in the last two to three years that haven’t shone favourably on policing, in many cases, McDonald argued, unfairly.

McDonald said the RCMP has redoubled its recruiting efforts and has also created a program to allow experienced police officers to join the RCMP in a fast-tracked process.

He believes the RCMP will able to supply the 277 officers under the $230 million funding over three years, which does not kick in until April 1, 2023.

But McDonald said the RCMP have less control over soft vacancies and there is an increasing awareness of mental stressors on the job and health issues such as post traumatic stress syndrome, more commonly known as PTSD.

The B.C. RCMP are not alone in high vacancy rates.

The audit found that constables on long-term leave made up one third of these vacancies and that stress-related officer leaves were contributing to rising vacancies.

British Columbia has not undertaken a detailed audit such as this of RCMP supplied policing services.

Call Of The Wilde: Ottawa Senators outgun the Montreal Canadiens

Ukraine’s Zelenskiy decries neutrality in sports at time of war

1 year after disrupting Alberta's border with the U.S., protesters return to Coutts — where wounds remain

‘Blown away’: Hamlin thanks medical team, fans for support

Trump says beating of Nichols ‘never should have happened’

Is tipping getting out of control? Many consumers say yes

Maryland rolls over slumping Nebraska to stay hot at home

Liveblog: Sens up 3-0 on Habs after second period

Death of Victoria man at 844 Johnson: 'We both knew this building was going to kill him'

Laval man wanted for pimping in Quebec is arrested in Mexico

Indigenous boy with autism should not have been handcuffed at Vancouver hospital, says mother

More outdoor defibrillator stations needed if lives are to be saved: experts

In 67 minutes of video, brutality followed by nonchalance

MANDEL: Murder victim’s mom says ‘our torture continues’ as Millard and Smich sentences to be reduced

Distrust of police: Black parents, children have ‘the talk’

Kobe Brown powers Missouri in upset over No. 12 Iowa State

Ukraine intensifies effort to bar Russian athletes from Olympics in 2024

As Fredericton creates more housing than ever, affordability is a challenge

No. 16 Marquette seize command late to cruise past DePaul

Thailand from A to Z

GOLDSTEIN: Health care is broken and our governments broke it