Overflowing garbage bins are becoming an all-too-common sight in Regina and many residents say they’re frustrated with the city’s decision to move to biweekly garbage collection.

Each year, the City of Regina moves to biweekly pickup from about November to April, excluding a 10-day period of weekly pickup over the Christmas holidays.

“I get that it works for smaller families, but we’re a family of five with a large dog. It just doesn’t work,” Mandie Hagel said.

“The biweekly garbage pickup has been a huge inconvenience for us, one that has grown exponentially since COVID-19.”

Matt Jacobs says his garbage bin is already full with nearly a week to go before collection. 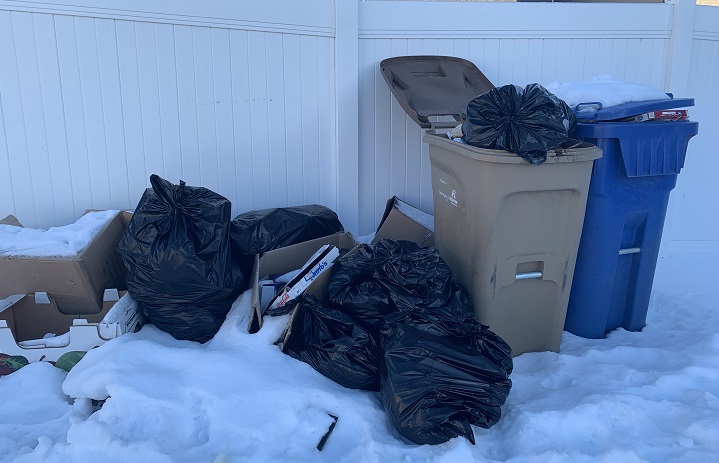 “Pickup is next Wednesday. By Wednesday, we will likely have three-plus garbage bags with nowhere for them to go,” Jacobs said.

“It leaves us putting garbage bags into our minivan and trying to dispose of them at work. Setting them on the ground outside is a bad option as animals get into them.”

Despite the rising concerns, the city appears to be standing firm on its decision, saying it’s needed to reduce strain on its landfill.

“The city is focused on reduction and is encouraging residents to reduce, reuse and recycle to extend the life of our landfill and to protect the environment,” said Kurtis Doney, City of Regina’s director of water, waste and environment.

Many residents argue they do recycle, but still have too much waste at the end of two weeks.

“I only have three people living in our house…our bin is always full,” Danielle McCallum said.

“We are good about separating recycling and garbage…both are still full. We pay a lot of taxes for less and less things.”

Not all residents feel the same way. There are some who believe the city’s decision to move to biweekly garbage collection is a good one.

“Two weeks has never bothered us. We have a family of five and we always have room. When my wife had a daycare we still managed fine every two weeks,” Peter Kampe said.

Like Kampe, Ally Mark isn’t burdened with overflowing garbage bins, but does not understand why taxes remain the same as in the summer when garbage is picked up weekly.

“I understand taxes cover more than that, but you can’t expect people being okay paying the same as they do the rest of the year and receiving less services,” Mark said.

Doney said if biweekly pickup doesn’t work to contact the city for “tips and tricks” on how to reduce waste or to buy another bin.

The city is also hosting a live event on its Facebook page on Dec. 7 at 6:30 p.m. on ways to limit garbage in your home.

Levandovsky has 500 goals in his career. Only Ronaldo, Messi and Zlatan have scored as many of the current players
Real Madrid director Butragueno on Modric: Such players make football better. The fact that he is in our team is a luxury
Neymar has included Zlatan, Beckham, Buffon, Weah and seven Brazilians in the PSG legends squad
Greenwood is the youngest scorer of the goal against Liverpool for Manchester United after Rooney
Barcelona without Messi does not lose 12 matches in a row
Ronald Koeman: Barcelona played their 7th game away in a row. We are far behind Atletico, but we will fight
Arsenal, Leeds and Hertha are Interested in Draxler. PSG is ready to release him and Kerer
Source https://globalnews.ca/news/7488875/regina-residents-biweekly-garbage-pickup/

Trapped for 2 weeks, 11 workers rescued from gold mine in China

Ontario reports 2,417 new cases of COVID-19 and 102 more deaths related to the virus

‘It’s like a miracle’: Prince Albert, Sask., teen recovering in RUH after being hit by vehicle

One person dead, others injured in crash in the Trenton area

‘It wasn’t called COVID at the time:’ One year since Canada’s first COVID-19 case

A timeline of COVID-19 in Canada

'No longer considered suspicious': no charges after body of woman found in Buckingham