A former priest accused of sexually assaulting her 10-year-old girl at a Manitoba boarding school more than 50 years ago has pleaded not guilty.

Arthur Masse, now 92, was not in court in Powerview, Manufacturing State on Wednesday, but filed a petition through his attorney. His case is set to go to the Queen's Court of Winnipeg trial only, but a trial date has not yet been set.

Masse was arrested in June after a decade-long investigation and is now facing lewd assault charges.

According to the RCMP, the victim was Fort in Thug Keane First Nation in eastern Manitoba, where Masse worked. He was a student at the Alexander Boarding School.

Police have not released the name of 's victim, but 63-year-old Victoria McIntosh of Sagkeeng First Nation said she was at the center of the case. He said he was a child. 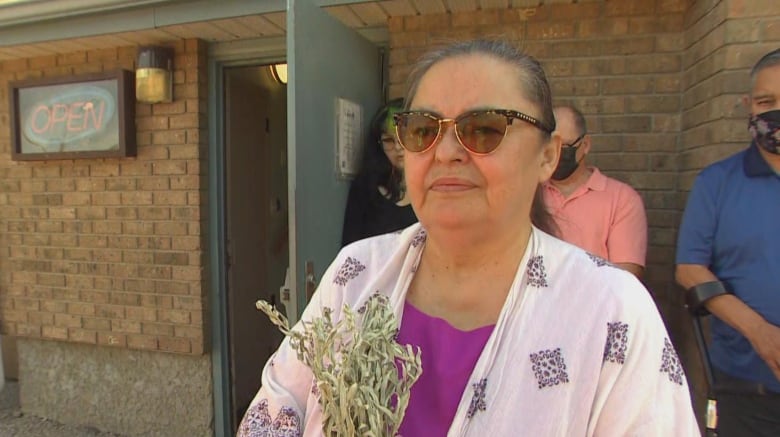 Victoria McIntosh, who says she was assaulted by Masse more than 50 years ago, was outside a courtroom in Powerview, State of Manifesto, Wednesday. standing. She wants to attend all court hearings and speak directly to Masse. (Radio-Canada)

I made a promise and I'm going to keep it," she said outside the Powerview courtroom. on wednesday.

"Mr. Masse, come out and tell your truth. I'll tell you my story."

At a Powerview hearing last month, Sagkeeng chief Derrick Henderson has requested that the court work with the community to set up a sentencing circle for Masse.

Sentencing circles are community-driven restorative justice processes conducted in partnership with the justice system, based on the belief that crimes are crimes against the entire community, not just the victim.

Marilyn Kurshen, , who attended day school at Fort Alexander when Masse worked there, stood alongside McIntosh outside Powerview Courthouse on Wednesday. A retired priest said he wished he could join 's sentencing circle.

"Our method was to go in circles, listen, and use the seven teachings," Kurshen said.

"Our approach, after all, would have been one with forgiveness and openness, and I think both sides would have benefited."

It is not clear whether Masse refused to participate in the sentencing circle, or the choice was not presented to him.

Chief Henderson said Wednesday that he expects Masse to plead not guilty and that community members will continue to attend court hearings with McIntosh. We will be behind Victoria and her family until this process is complete.We have a lot of support from the community and from outside the community," he said.

Once the trial is scheduled, Henderson says Sagkeeng leaders will arrange transportation so those who want to attend the trial do not have to worry about going to Winnipeg.

"We must ensure that justice is done for the people."

Masse said he has set another trial date for September 14, but that Expected to be businesslike in nature.

Support is available to anyone affected by the boarding school experience or recent reports.

A national Indian Residential School Crisis Line was set up to assist former students and those affected. People can access the Emotional and Crisis Referral Service by calling the 24-hour national crisis response phone number 1-866-925-4419.

Indigenous artists contributing to truth and reconciliation through music and dance

2 people taken to hospital after motorcycle, vehicle collide in Toronto

Tsleil-Waututh take pilgrimage from the former St. Paul's Residential School in North Vancouver to their homes

‘ANOTHER BLESSING’: Nick Cannon becomes a dad for tenth time

Montrealers march to mark National Day for Truth and Reconciliation

Jays clinch wild-card spot on day off, will celebrate Friday

Canadiens GM says No. 1 pick Juraj Slafkovsky has been underwhelming

‘WE WERE TORTURED’: U.S. captives ‘prayed for death’ on brutal ride from Ukraine

HORNBY: Maple Leafs out of their depth in blueline injuries

US defense chief in Hawaii amid distrust after fuel spill

‘We’re not naive’ about who’s behind ‘sabotage’ of Nord Stream pipelines, Joly says

Brian Hoyer to be under center as Patriots visit Packers

In Your Debt: 3 steps to lower the cost of your debt

MANDEL: Will serial domestic abuser get another slap on the wrist?

Ex-Alouettes GM Reed done with CFL, but he's not finished in football

Trump fraud lawsuit goes to judge who held him in contempt

Quebec election: Conservatives accused of opposing Bill 96 as a ploy

Dolphins’ Tagovailoa has concussion, no timeline for return

Arid September for many communities across B.C.

EDITORIAL: Is it Justinflation? Or just inflation?

Union meets Charlotte FC with East title in the balance

‘Unlike learning about other histories’: Stz’uminus youth collaborate on new B.C. exhibit

Ex-police chief believes it's too hard to fire bad cops in B.C. Others disagree.

Beachside location influences design of the interiors at The Granary

Obesity should be reclassified as a brain disorder like autism or ADHD: Doctors