But now, the 24-year-old convicted killer is terrified those physical qualities will make him a target for jailhouse rapists, his lawyer told Fox News.

Grantham pleaded guilty to murdering his mother, Barbara Waite, in a shooting at her British Columbia home. The second-degree murder conviction means he can’t apply for parole until he’s served 14 years in the slammer.

That’s a lot of sleepless nights in a maximum-security prison.

“When people plead guilty to a crime, it doesn’t mean they’re saying, ‘Sure, I’ll be raped and abused by other prisoners.’ That’s not part of the deal,” his lawyer, Chris Johnson, told Fox News.

Johnson added that even Justice Kathleen Ker — who oversaw Grantham’s case — worried that the killer could be in grave jeopardy in a maximum-security prison. She asked that the fallen thespian be sent to a medium-security joint instead. 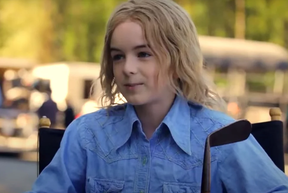 “My biggest concern is that he will be preyed upon by other prisoners and perhaps abused by them,” Johnson said.

Despite the judge’s concerns, it is the Correctional Service of Canada (CSC) that will determine which jailhouse Grantham will serve his time in.

Johnson said his next move is a request to CSC to have Grantham sent to a low-security prison.

Grantham shot his mother in the back of the head while she played piano at home on March 31, 2020.

In addition, the troubled former actor also planned to kill Prime Minister Justin Trudeau. After murdering his 64-year-old mother, he loaded the family car with three guns, a dozen Molotov cocktails and enough ammo to trigger a small war.

But after driving east for several hours, he abandoned the Trudeau assassination scheme. He pondered unleashing carnage at Simon Fraser University.

Instead, he drove to a nearby police station and confessed to murdering his mother.

According to cops, Grantham killed her “to spare her from seeing the violence he intended to commit” on the world and himself.

Ble Goude returns to Ivory Coast after 11 years in exile

‘It still hurts:’ Families hope for new homes after mass stabbing in Saskatchewan

COVID-19: Clinics aim to help long-COVID patients get through their day

Soccer-‘There will be a few hangovers’: Arnold happy to put a smile on Australian faces

Kyiv summit promotes ‘Grain from Ukraine’ for most vulnerable

Canada coach Herdman on Croatian tabloid: 'My wife's coming after you guys'

Knights, in mini-slump, take on Canucks

Soccer-Canada fired up for ‘hell of a game’ against Croatia, manager says

Lakers enjoying return of LeBron ahead of second game in series vs. Spurs

What are ‘Buy Nothing’ groups? Experts say trend can help Canadians handle inflation

About Yesterday: The kids make some magic in Habs' 3-2 win over Hawks

Michael Kempa: How Trudeau (barely) made his case for using the Emergencies Act

Christmas Fund: Debbie's mom has always been there for her. Now she wants to give back

The road to a better Mount Royal starts with safety

Freed: The 'beautiful game' of soccer is a mystery to me

'Incredibly problematic, entirely undemocratic'; New mayor and councillors don't want minority-rule power to pass bylaws. But what can they do about it?

Avi Benlolo: Definition of antisemitism only ‘polarizing’ to Israel’s detractors

Soccer-England on brink of last 16, but all options open in Group B

Why there's excitement and skepticism about new Alzheimer's drug lecanemab

Could the convoy come back?

Soccer-World Cup Winners list: which teams have won each year