On a remote, windswept stretch of the Russian steppe last week, a military official shouted into a microphone, giving play-by-play commentary as tanks, combat helicopters and fighter jets fired and bombed their way through a multi-nation exercise near the Kazakhstan border.

It is one of several drills that Russia has staged in recent weeks alongside allies from central Asia. The latest one, which a CBC crew was invited to witness, took place between Sept. 20 and Sept. 24 at the Donguz training range in Russia's Orenburg region.

Nine nations took part in the drills — dubbed "Peace Mission-2021" — including Pakistan, Uzbekistan, Tajikistan and China, all of which border Afghanistan.

The exercises were partially focused on anti-terrorism operations, and officials with Russia's Ministry of Defence were eager for them to be publicized.

While it is clear Russia is keen to show off its vast weaponry and military prowess, observers say the country is also sending a message. Just what that message is — and who is meant to receive it — is up for debate.

Since the Taliban seized power in Kabul and ousted Afghanistan's government on Aug. 15, the militant group has tried to assure the international community it will run a stable government. But it has not renounced its ties with al-Qaeda, and there are concerns the takeover of Afghanistan could lead to a rise in terrorism in the region.

Temur Umarov, a research consultant with the Carnegie Moscow Center, said Russia is broadcasting competing narratives through its public statements and its military exercises about the risk of threats from Afghanistan spilling beyond its borders. 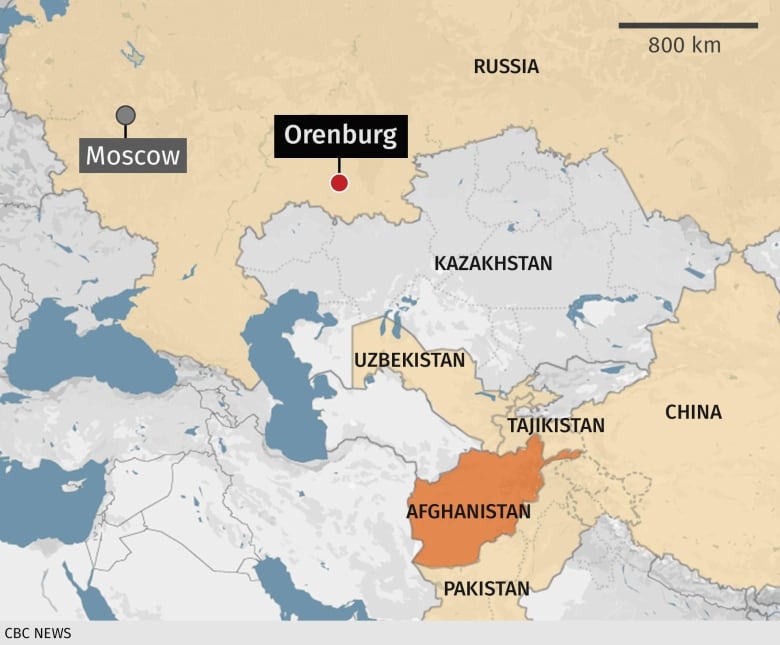 He said on the one hand, Russia is projecting confidence in a bid to assure its citizens that it has the situation "under control." At the same time, officials are telling neighbouring countries that the risk emanating from Afghanistan is so great, they better fall into line with Moscow.

The CBC crew travelled nearly 1,500 kilometres, onboard a military aircraft and later a bus, to the military training ground.

At the site, soldiers dressed in full camouflage stood behind a table lined with deadly weapons, including sniper rifles and grenade launchers. Others stood beside Buk missile systems and drones, as journalists were invited to meander around and check out the equipment. 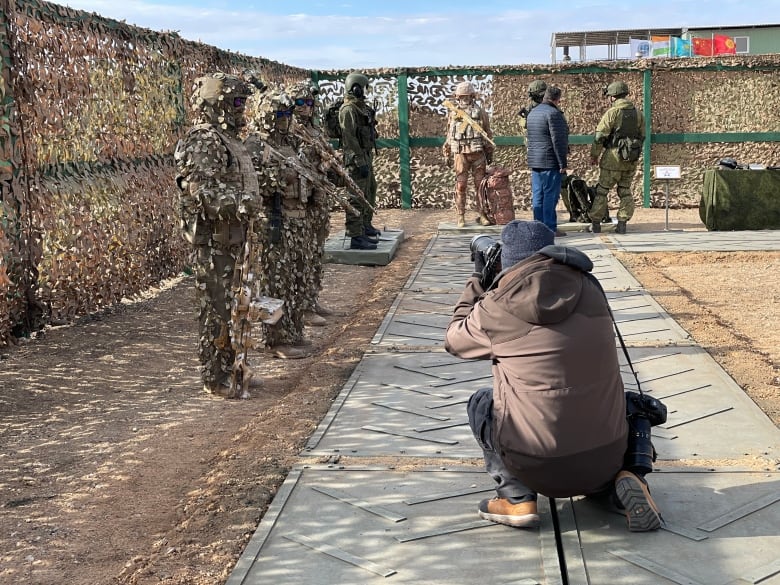 Forty members of the media, including Russian journalists and foreign correspondents, were invited to watch the military exercises on Sept. 23. (Briar Stewart/CBC )

CBC attempted to speak to a handful of soldiers participating in the exercises, but none wanted to speak about Afghanistan, or what the Taliban takeover could mean for the region.

Russia's foreign minister, Sergey Lavrov, spoke from the United Nations on Sept. 25, saying that international recognition of the Taliban is not currently on the table. Unlike most nations, which have closed their embassies in Kabul, Russia has kept operating in the Afghan capital.

Alexei Leonkov, a Russian military writer who was along for the training trip, told CBC that the country is taking a wait-and-see approach when it comes to the Taliban. But he said there is hope the Russian government can have constructive relations with the militant group now in control of Afghanistan.

However, when it comes to any threat of terrorism moving through Central Asian nations and encroaching on Russia's southern border, Leonkov says the country is being proactive and using drills like this one as a show of force.

"Once again we remind some of those hotheads who lead these terrorist groups that it's not worth it to mess with Russia and her partners and allies," he said.

Russia has seen its share of deadly terrorist attacks, including the 2002 hostage-taking at Moscow's Dubrovka Theater, which was seized by upwards of 50 Chechen Islamist militants, and resulted in the deaths of at least 170 people.

Russian officials are quick to publicize any arrests of suspected extremists, including those from the Islamic State and al-Qaeda.

During last week's military exercise, almost as if on cue, Russian officials announced that security services had detained 15 alleged terrorists operating in Yekaterinburg, a Russian city about 1,800 kilometres east of Moscow.

Officials said the majority of the suspects were from countries in central Asia, and are accused of being Taliban supporters and trying to recruit locals to join their extremist network. 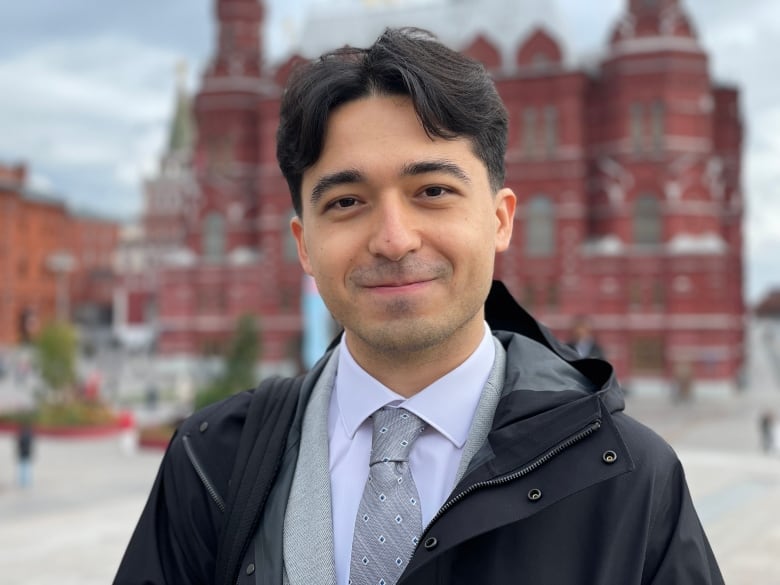 Temur Umarov, a research consultant for the Carnegie Endowment for International Peace in Moscow, believes Russia is sending different messages to different audiences when it comes to the risk of terror coming from Afghanistan. (Briar Stewart/CBC )

In a statement to the media, Russia's chief of the General Staff of the Armed Forces, Valery Gerasimov, said the biggest concern is that terrorists could infiltrate neighbouring countries, making their way over borders that in some cases have been overwhelmed with Afghan refugees.

Officials in Tajikistan, which borders Afghanistan to the northeast, said they have heard reports that some of its citizens who fought alongside the Taliban are making plans to cross back over.

One area that's particularly difficult to secure is the 1,300-kilometre mountainous stretch separating Tajikistan from Afghanistan. In August, Russia staged a military drill there, just 20 kilometres from the Afghan border.

Russia already has a base in Tajikistan, its largest on foreign soil. Earlier this month, Russian officials announced they are deploying 30 additional tanks there, as well as sending military equipment to the Tajikistan military.

Umarov said Russia is reluctant to get directly involved in Afghanistan, given the vivid memories of its disastrous nine-year war there during the 1980s. 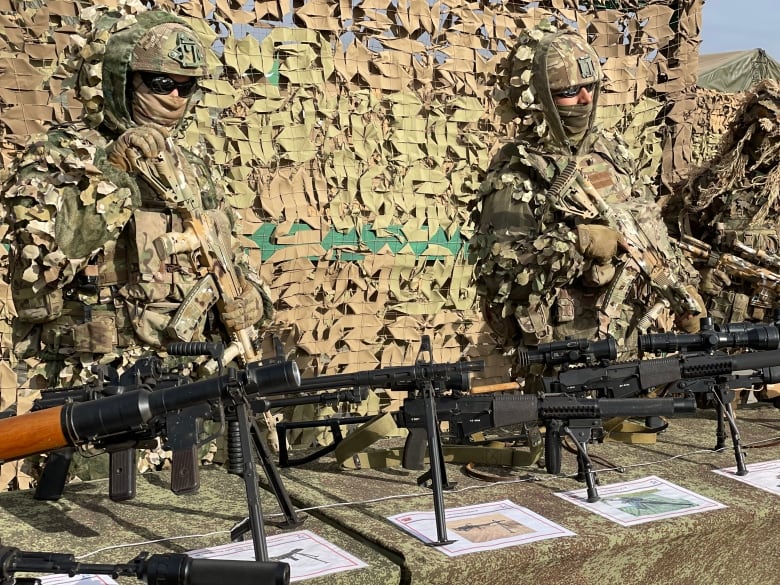 Its only concern is to make sure its border is secure, he said, but it also sees the current political climate as an opportunity to strengthen military ties with its neighbours.

"For years now, we have been witnessing how Russia's influence in central Asia is going down because of China's rise," he said. "And Russia has been concerned about that."

Umarov said the country now sees a chance to expand its sway, by letting all of its neighbours know that it will be taking the lead when it comes to co-ordinating the defence of the region from any extremist threats.

Dani Alves: If Barcelona thinks they need me, it's a matter of one call. I can still be useful
Lewandowski wants to move to Real Madrid. He will ask Bayern for a transfer (As)
Sarri about the calendar: Football is no longer a sport, but a show from which they are trying to squeeze as much money as possible
Calvert-Lewin is Arsenal's main target for the summer. Lacazette and Nketiah will leave for free
Tuchel about Newcastle: A new contender for the title. The Premier League is the most difficult league in the world, and it is getting more and more difficult
The director of Barca about Dembele and Roberto: They want to stay, but the club has to adjust salaries. This complicates the negotiations
Benzema on the Golden Ball: I have done a lot in the last 3-4 years and I continue to play at a high level

No. 24 SDSU pulls out double-OT win over SJSU

Tennis-Azarenka proud of fight in comeback win over Ostapenko

No. 9 Oregon rallies past Cal, then holds on for win

Red Sox turn to Nathan Eovaldi in Game 2 vs. Astros

Darwin family microscope to be sold at auction

Sky shut down Mercury, move to brink of WNBA title

Australian koalas line up for chlamydia vaccine in new trial

Tennis-‘Today was just not my day’: Zverev regrets shock defeat to Fritz

Video shows Tesla driver who appears asleep at the wheel on B.C. bridge at rush hour