Ryan Reynolds and Blake Lively have donated $250,000 to a Canadian group that mentors Indigenous youth.

Influence Mentoring offers support to Indigenous students looking for job opportunities by matching them with mentors who will help them in their field. The mentors are not all Indigenous, but they act according to a “spirit of reconciliation,” chairperson Colby Delorme said.

The organization says it’s guided by the calls to action put forward by the Truth and Reconciliation Commission. Article 7 calls for a strategy to “eliminate educational and employment gaps between Aboriginal and non-Aboriginal Canadians,” and Article 14 states that Indigenous peoples have the right to establish and control their educational systems and institutions providing education in their own languages, in a manner appropriate to their cultural methods of teaching and learning.

Reynolds, who grew up in Vancouver, and his wife Lively said in the statement that they’re “so happy to support the Influence Mentoring program that will help Indigenous youth in Canada, who are trying to successfully complete their post-secondary pursuits and enter the job market for the first time.” 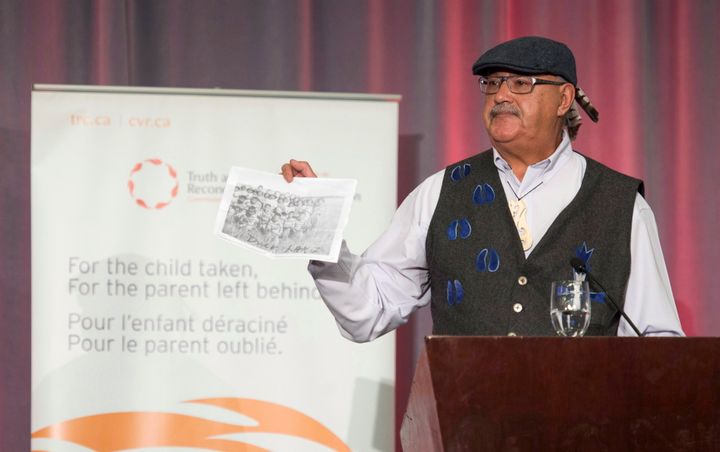 Residential school survivor Eugene Arcand holds up a picture of his classmates at the release of the final report of the Truth and Reconciliation commission on Dec. 15, 2015.

The couple have donated to charitable causes affecting youth in the past. In 2019, they partnered with the Young Center for Immigrant Children’s Rights, a Chicago-based non-profit that advocates for immigrant children who arrive in the U.S. without their parents.

Last summer, during the fallout from the killing of George Floyd, Reynolds and Lively were criticized for their 2012 wedding, which took place at a South Carolina plantation.

“It’s something we’ll always be deeply and unreservedly sorry for,” Reynolds told Fast Company in August. “A giant fucking mistake like that can either cause you to shut down or it can reframe things and move you into action. It doesn’t mean you won’t fuck up again. But repatterning and challenging lifelong social conditioning is a job that doesn’t end.”

Since then, Reynolds and Lively have continued to donate to a number of charitable causes, including the NAACP Legal Defense Fund, the Ottawa Food Bank, an Indigenous women’s leadership program at St. Francis Xavier University in Nova Scotia, and groups that work with homeless youth in Canada.

Paul Scholes: Manchester United really need a nine. Holand would be an ideal option
Gonzalo Higuain: Messi and Ronaldo felt they could rely on me. I understood that they liked it
Henderson on racism on social media: Who do you have to be to do this? Attacking dark-skinned people for perverse pleasure? I'm sick of this
Hugo Sanchez: Real Madrid need to find a way to sign Holand and Mbappe
Barcelona will extend the contracts with Puch and Mingesa until 2023. With Sergi Roberto has not yet agreed
The matches of Euro 2020 in Rome will be held with the audience. Guarantees were provided by 9 of the 12 cities
Ole Gunnar Solscher: Rashford has a bad leg. I will give him as much time as I can

Terry Glavin: Canada humiliates itself once again with its shameful treatment of Taiwan’s Tsai

When can adults drink alcohol in Vancouver parks?

‘I WAS A MONSTER’: U.K. woman claims COVID-19 vaccine left her looking like an ‘alien’

Rethinking Handel gifted us a Messiah for the multitudes

More than 85% of Atlantic Canadians plan to get COVID-19 vaccination: survey

Cohen: Challenges from both Russia and China confront Joe Biden

Juno Awards shift to June 6 due to COVID-19 pandemic

Geese are fine in the snow, Manitoba wildlife centre says

Kelly McParland: It’s time for Tories, NDP to hold their nose and say no

Motor racing-Hamilton and Verstappen take their battle to Imola