Saskatchewan Premier Scott Moe condemned what he called a "misguided protest" outside the Regina home of the province's chief medical officer of health. 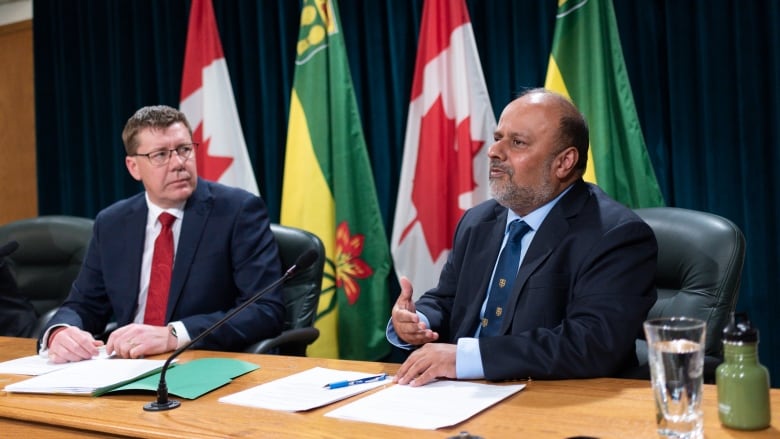 Saskatchewan Premier Scott Moe condemned what he called a "misguided protest" outside the Regina home of the province's chief medical officer of health.

Moe said Dr. Saqib Shahab has worked tirelessly to protect the province's residents throughout the pandemic and should not be subjected to harassment from a "group of idiots."

In a written statement released late Saturday, he said those who disagree with his government's decisions should take their issues up with him or a local legislator rather than going after a "dedicated public servant and his family."

Moe said the Regina Police Service and the RCMP are both involved to make sure Shahab and his family are safe.

He said the government is looking into long-term security options to protect Shahab and his relatives, and that he's encouraged the police forces to investigate any potential criminality in the protest.

A spokesperson for Moe declined to say what security options are being considered. But Jim Billington said Shahab and his family were not harmed during the protest.

Regina police did not immediately respond to a request for comment.

Now, Moe says he has a message for those who are taking aim at Shahab.

"This harassment of Dr. Shahab and his family at their home is simply unacceptable, sickening and wrong," he said. "To those that did this — you should be ashamed of yourselves and your actions."

Zidane on the draw with Sociedad: We lost two points. We had obvious moments in the first half
Wolverhampton defender Kilman is ready to play for the Ukrainian national team. Earlier it was reported that he can choose Russia
Pochettino on the new remontade with Barca: In football, even the unthinkable is possible, but we are positive
Real Madrid snapped a 5-game winning streak with a draw with Sociedad
Neymar is likely to miss the Barcelona game. PSG don't want to take any chances
Real Madrid conceded for the first time in 5 matches
Miranchuk about Bergamo: They start to find out in a cafe, come up with a smile and say: Forza Atalanta!

Youth injured in assault with a weapon outside high school in Surrey, B.C.

MPs to hear from ministers, officials on safety of returning travellers in quarantine

Winnipeg river trail closing for the season as of Tuesday

Kingston police bust 2 people with $40,000 worth of fentanyl, cash

Canadians should be able vote by phone during pandemic: Committee

White House declarative on whether U.S. will share vaccines with Canada, Mexico: ‘No’

SIMMONS: Divided dreams — the state of women’s hockey needs to be fixed

‘Moxie’ Review: Amy Poehler Returns to the Director’s Chair With a Progressive Yet Broad YA Dramedy

COVID-19: Active cases up to 50 for Peterborough area, outbreak declared over at Buckhorn daycare

COVID-19 Benefits Gave Households Up To $3,000 In Extra Cash: StatsCan

B.C. says all eligible adults should get first dose of COVID-19 vaccine by end of July

Port of Vancouver breaks records for grain, potash and containers despite COVID-19

Why are hate crimes up in Ottawa? Because police and the public know what to look for

Brazilian states blast Bolsonaro over pandemic during worst phase yet

Rex Murphy: Finally we might get answers to the Trudeau-WE Charity scandal

Highway 400 closed in both directions due to series of collisions

AstraZeneca COVID-19 vaccine not recommended for Canadians over age 65: NACI

Homicide investigators called after child in Agassiz found near death