JERUSALEM — An Israeli man died Saturday from wounds he sustained in twin blasts that hit Jerusalem earlier this week, bringing to two the number of dead in the explosions that Israeli police blamed on Palestinians.

Shaare Zedek Medical Center in Jerusalem announced that Tadesse Teshome Ben Madeh had died. He was critically wounded in one of the blasts at the city’s bus stops.

“The trauma and intensive care teams of Shaare Zedek fought for his life, but unfortunately his injury was very fatal,” the hospital said.

The first explosion occurred near a typically crowded bus stop on the edge of the city. The second went off about half an hour later in Ramot, a settlement in the city’s north. One of the blasts immediately killed Aryeh Schupak, 15, a dual Israeli-Canadian national who was heading to a Jewish seminary when the blast went off. 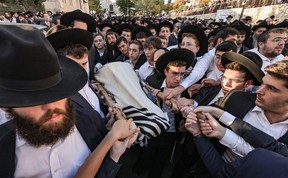 Ultra-Orthodox Jewish mourners carry the body of Aryeh Schupak, 15, an Israeli-Canadian killed in an attack on a bus stop in Jerusalem, during his funeral on Nov. 23, 2022. Photo by MENAHEM KAHANA /AFP via Getty Images

The blasts wounded about 18 Israelis, three of them seriously.

While Palestinians have carried out stabbings, car rammings and shootings in recent years, bombing attacks have been very rare since the end of a Palestinian uprising nearly two decades ago.

No Palestinian group claimed responsibility for the Jerusalem explosions.

Tensions between Israelis and Palestinians have been surging for months, amid nightly Israeli raids in the occupied West Bank prompted by a spate of deadly attacks against Israelis that killed 19 people in the spring.

More than 130 Palestinians have been killed in Israeli-Palestinian fighting in the West Bank and east Jerusalem this year, making 2022 the deadliest year since 2006. The Israeli army says most of the Palestinians killed have been militants. But stone-throwing youths protesting Israeli army incursions and others not involved in confrontations have also been killed.

Election skeptics slow to get sweeping changes in GOP states

It wasn’t me: Ex-UK PM Truss blames ‘system’ for her failure

Reactions to the death of former Pakistan President Musharraf

How old electric car batteries could power the future

Raymond J. de Souza: Australia bids farewell to Cardinal George Pell, who was made a martyr by a corrupt justice system

METS, watts or heart rate: What is the best way to measure your workout?

Opinion: 67% agree Canada is broken — and here’s why

Colby Cosh: Disabled man solved homelessness with trailer home. The government would have none of it

Rural ER docs are struggling to do it all. Peer support programs try to lessen the load

How do you take a polar bear to the vet? Very carefully

When are final exams necessary? Not all high schools in Canada take the same approach

How antisemitic tropes are being used to target the LGBTQ community

EU migration impasse leaves many refugees out in the cold