Metro Vancouver and the Fraser Valley are in the grips of a snowstorm dumping at a rate of several centimetres an hour.

Get out your snow shovel, boots and mitts because Wednesday morning is going to be intense.

Environment Canada has a weather warning that remains in effect forecasting “significant” snowfall that began early Tuesday afternoon and was not expected to let up until Wednesday morning. Weather Network meteorologist Tyler Hamilton says Wednesday morning will be “an absolute mess”.

Check back for more weather updates. Scroll to the bottom section of the story for tips to deal with snow and cold weather.

The Alex Fraser Bridge was closed in both directions for several hours due to several vehicle incidents on Tuesday evening, mostly in the northbound lanes. The northbound left and right lanes re-opened around 11 p.m., and DriveBC reported the southbound lanes reopened around 3 a.m. on Wednesday. Heavy congestion remained overnight for the bridge, which links Richmond and New Westminster to North Delta.

Traffic along Highway 1 between Vancouver and Surrey was also restricted with several fender-benders.

Drive B.C. had issued widespread travel advisories for highways across the south coast and beyond on Tuesday.

Drivers were being warned to expect winter conditions on the Trans-Canada from West Vancouver to Hope, the Coquihalla between Hope and Merritt, and highways 17 and 99 from the ferries through the Lower Mainland and Fraser Valley.

The advisories will be in effect until at least Thursday in much of the region.

In Metro, there are several TransLink issues, with no buses to UBC getting through. At 9 p.m. there were around a dozen 99 B-Line and other buses on Broadway between Burrard and Granville Street.

Footage on the following tweet showed a TransLink Handi-Dart bus slamming into a line of cars involved in an earlier collision.

The heavy and wet snow is also coming with high winds and this is leading to power outages. As of 10:30 p.m. there were more than 36,000 homes without power.

There are 8,477 homes without power in the Lower Mainland and Sunshine Coast.

Crews are experiencing delays in reaching trouble areas due to the poor road conditions and ferry cancellations. As a result, some customers will be without power overnight.

Will there be a snow day tomorrow?

With any major snowfall in Metro Vancouver, there’s always the possibility of school closures. We’ll be monitoring the districts on Wednesday morning and will update this list with any public school and post-secondary school closures.

School districts will only make an announcement if they cancel, not if schools are remaining open.

Dozens of flights out of Vancouver airport and all major B.C. Ferries sailings were cancelled on Tuesday as snow started falling across the Lower Mainland.

B.C. Ferries cancelled all sailings from 3 p.m. Tuesday between the mainland and Vancouver Island, including those between Tsawwassen and Swartz Bay in Victoria, Tsawwassen and Duke Point near Nanaimo, and Horseshoe Bay and Departure Bay in Nanaimo. B.C. Ferries is expecting sailing to resume as normal on Wednesday morning.

YVR’s departures list showed nearly three dozen cancelled flights for Air Canada, Westjet and other airlines as snow began to accumulate Tuesday afternoon. Many other flights headed to Vancouver were also been cancelled. Monitor YVR’s website and check with your airline if you had planned to travel tonight or tomorrow.

On Tuesday night it was a mixed bag at YVR, with some planes departing late or being cancelled and some on time.

At 9 p.m. there was an alert issued that a plane had overshot the runway with 271 passengers and crew onboard, but no one was injured.

The University of B.C. said while snow is falling there too, campus operations remain normal. UBC said it would update about Wednesday’s plan by 6:30 a.m.

SFU and the colleges will make a decision early Wednesday and notify students. 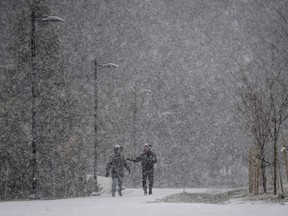 Heavy snow falls on a pathway at Central Park in Burnaby on Tuesday. Photo by DARRYL DYCK /THE CANADIAN PRESS

How much snow will we get?

Weather Network meteorologist Tyler Hamilton says up to 20 centimetres of snow would fall over the Lower Mainland over a 12-hour period.

North Vancouver, Coquitlam and Maple Ridge are expected to get the heaviest snowfall, with up to 20 cm forecast by Environment Canada, while Vancouver, Burnaby, New Westminster, Surrey, Langley and Abbotsford could get between 10 to 15 cm of snow.

The North Shore mountains could get up to 50 cm of snow. Whistler is also expected to get a massive dump.

Areas south of the Fraser River — like Delta and White Rock — will be spared the brunt of the impact and likely see around 10 cm of snow.

Temperatures are expected to rise above freezing on Wednesday, so there will be a lot of slush that is likely to lead to power outages.

Temperatures will cool again on Thursday, with some light rain or flurries expected.

Hamilton is forecasting another snow event on Friday, which could also be significant.

“It’s not a one and done,” said Hamilton. “We are likely going to see a couple of snowfall events this week.”

Before you put on your winter woolies and grab that snow shovel, watch this video for tips on how to clear that driveway safely.

1. Walk like a penguin when the path is icy: Point your feet outward and relax your knees. Holding your arms away from your sides to maintain your balance, walk slowly and flat-footed, taking short steps.

2. Put Kitty Litter in your pockets or a zip-lock bag: If you find yourself faced with icy walks, icy steps or slippery slopes, sprinkle litter to improve traction. Sand works, too. Avoid commercial de-icers, which should be handled with gloves.

3. Get out the ski poles: They are a good way to add stability when you walk. Check the garage, there is nearly always a set of ski poles around. Buy ice picks if you use a cane.

4. Step to the side: If your path looks icy, you may get better traction by walking on snow or grass. If you have to climb on accumulated snow to get in the car, keep a good grip on the door.

5. Choose footwear with winter treads made of natural rubber: Avoid dress shoes with smooth soles, and put away your high-heeled boots, they can be deadly. Wear a long, heavy coat to cushion your fall.

Motorists who plan to travel by car during snowy conditions should pack an emergency medical kit that includes a supply of food, water and warm blankets. You should also have a shovel, ice-scraper and brush in your vehicle at all times.

Here are some other winter driving tips:

• Remove all the snow and ice from the car windows, tail lights and headlights before setting out.

• Gradual starts and stops are the way to go when travelling in the snow. Never slam on the brakes. Instead, tap the brakes or downshift, gradually coming to a stop. This will prevent skidding as well as rear-enders.

• Avoid sudden acceleration. Flooring the gas pedal causes the wheels to spin in snow, often causing the car to get stuck. Avoiding complete stops can help drivers avoid getting stuck in the snow.

• Never try to overtake a snowplow unless you are certain it is completely safe.

Even with central heating, some rooms can benefit from the use of space heaters. However, precautions should be taken to minimize fire risk.

Use space heaters in an enclosed space, in the corner of the room while keeping doors to the room shut to keep warmth in, according to B.C. Hydro. Never leave the device unattended or use within three feet of anything combustible. It should be plugged directly into an outlet.

To ensure it won’t tip over, use it on a level floor and never go to sleep with the heater on. Turn it off when you leave the room.

Check for drafts in the home and apply weatherstripping, as well as window coverings, to prevent cold air gusts coming in.

‘Life goes on’ after Brazil riots but problems must be tackled: Supreme Court Justice

In The News for Feb. 3 : Canada’s finance ministers to meet today

Growing dog populations an issue in some remote communities, shelters under pressure

He chose to fight for Russia in Ukraine. So why did this mercenary defect?

Movie-goers are returning, but theatres are still waiting for a blockbuster year

Along Ukraine-Belarus border, a war of nerves – and drones

Top 25 roundup: No. 9 UCLA bounces back vs. Washington

No. 12 Gonzaga powers to easy win over Santa Clara

US seeks to expel Russian mercenaries from Sudan, Libya

No. 12 Gonzaga rebounds with easy win over Santa Clara

After delays in Dallas, Pistons ready to take floor vs. Hornets