Addressed to mayors of 32 cities across 10 states, Fred Eisenberger of Hamilton and Christian Provenzano of Sault Ste. Marie chose cities that rely on Canadian steel products for their manufacturing industries.

"Tariffs threaten the integrated supply chains of our local industries and the balanced relationship that has developed between our countries."

There are 10,000 direct steel production jobs in Hamilton and 30,000 jobs related to steel, said Keanin Loomis, CEO of Hamilton Chamber of Commerce.

Over in the Sault Ste. Marie region, imposed tariffs could result in the loss of 3,000 jobs, said MPP Ross Romano. 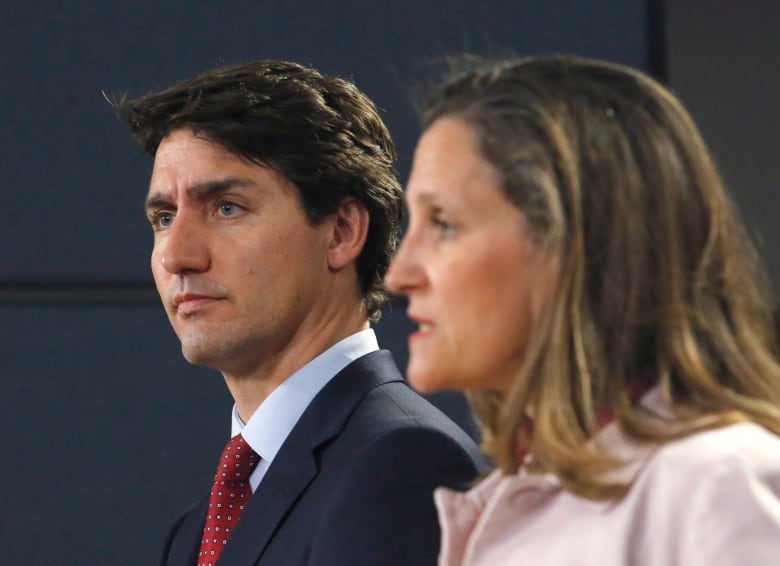 Prime Minister Justin Trudeau and Foreign Affairs Minister Chrystia Freeland speak at a press conference in Ottawa on Thursday, May 31, 2018. Canada is imposing dollar-for-dollar tariff "countermeasures" on up to $16.6 billion worth of U.S. imports in response to the American decision to make good on its threat of similar tariffs against Canadian-made steel and aluminum. (Patrick Doyle/Canadian Press)

Eisenberger said in a release Monday that the tariff is "ill conceived" and it will "result in job losses and higher prices for consumers."

The joint letter to mayors, including those in Mississippi and Texas, warns that the steel tariff will lead to the loss of 470,000 jobs in the U.S. It cites a study released the Trade Partnership Worldwide LLC.

The mayors then suggest their counterparts work with their governors, congressional leaders and the Trump administration to address the issue.

In response to the U.S. announcement, Canada will be countering them with dollar-for-dollar tariffs on some steel and aluminum products, as well as other goods such as beer kegs, whisky and toilet paper.

Minister of Foreign Affairs Chrystia Freeland and Prime Minister Justin Trudeau made the announcement hours after U.S. confirmed the tariffs.

Freeland said Canada's response is "the strongest trade action" in the post-war era, and that it's a proportionate response.

"This is a very strong Canadian action in response to a very bad U.S. decision," she said.

This is the best Milan in years: superkambekom with Juve (3 goals in 5 minutes!) saved the intrigue in Serie A
Zlatan Ibrahimovic: I am the President, player and coach! If I had been in Milan since the start of the season, we would have taken the scudetto
Sarri on the defeat by Milan: we played first-class football for 60 minutes. Then-turbidity
Pioli on the victory over Juve: Milan became a team. We can play even better
Pioli beat Juventus for the first time as a coach
Vardy has scored 10 goals for Arsenal in Premier League matches. Only Rooney has more
Ronaldo scores or gives an assist in 17 consecutive Serie A matches, where he scored 25 (21+4) points
Source http://www.cbc.ca/news/canada/hamilton/hamilton-sault-ste-marie-steel-tariff-joint-letter-1.4691360?cmp=rss

Malaysia’s Sime Darby to look into report of forced labor in call for U.S. import ban