More than 100 survivors of sexual exploitation and hundreds of non-governmental organizations are urging Ottawa to pursue a "full criminal investigation" of Pornhub's parent company.

In a letter to the House of Commons ethics committee this week, the coalition asked the federal government to push for a police probe of MindGeek, which they accuse of violating child protection laws and sharing intimate images without consent.

The Montreal-based company has come in for heavy criticism in the past few months following accusations it distributed exploitive videos and failed to adequately screen for illegal material.

MindGeek executives have denied any wrongdoing and said their company is a "world leader" in preventing the distribution of content showing child sexual abuse and non-consensual acts.

"MindGeek has zero-tolerance for non-consensual content, child sexual abuse material (CSAM), and any other content that lacks the consent of all parties depicted," the company said in an email.

"The harrowing stories of the survivors of CSAM and non-consensual imagery shake us to our core."

At least five lawsuits have been filed against the company in the U.S. and Canada over the past year on behalf of survivors of child abuse, sex trafficking and non-consensual image uploads.

The group behind the letter — signed by 104 survivors and 525 NGOs in countries ranging from Austria to Zambia — applauded the committee for studying the issue.

The coalition called on the government to encourage an investigation by the RCMP and to take "immediate legislative and regulatory action to protect children from this predatory and unethical corporation."

The letter claims MindGeek enabled and profited from "a range of criminal content" distributed across some of its 160-odd platforms. 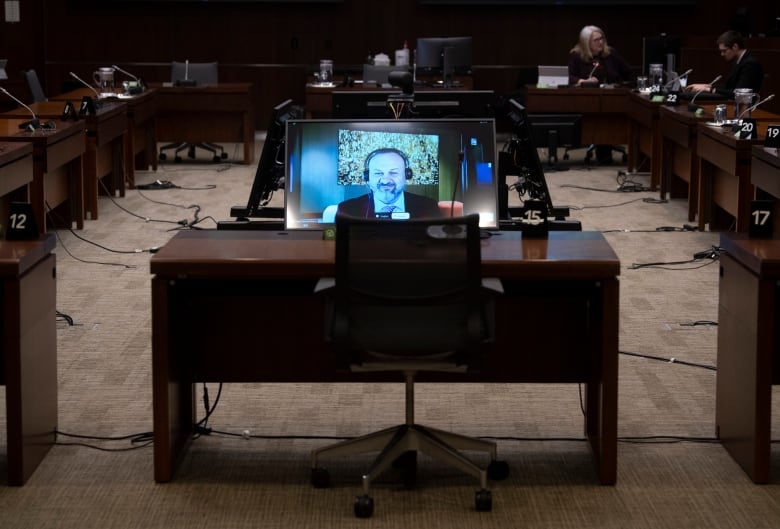 MindGeek Canada Managing Director Feras Antoon appears on a screen during a sound check as he waits to appear virtually before the House of Commons Standing Committee on Access to Information, Privacy and Ethics on February 5, 2021 in Ottawa. (Adrian Wyld/The Canadian Press)

"We always instruct all our agents to err on the caution side. If you have any doubt at all, just don't let it up," Tassillo told the committee on Feb. 5.

"It also appears that MindGeek has violated Canada's laws on publication of intimate images without consent," the letter states.

These "content partners" must submit a selfie of themselves holding a piece of paper with their username and "pornhub.com," according to the company website.

"There was a victim in Florida whose 68 videos were shared on there. She was a missing child who was found because of those videos," Pinter said in an interview.

"The sex trafficker was a verified user who had uploaded those videos. There was another instance of that happening in California."

MindGeek said in a statement it goes "above and beyond" the demands of Canadian law.

"Those who post CSAM and nonconsensual imagery are criminals — we will not stop working to improve our security until we have prevented every one of these criminals from abusing our platforms," the company said.

It said it works with more than 40 non-profit organizations to moderate and report content on its platforms.

Ronaldo is considering a return to Manchester United. Cristiano is ready to take a pay cut (GdS)
Arteta that Arsenal should not have been called to the Super League: We are one of the best clubs in the world. There is no denying the story
Man City have agreed to transfer 17-year-old winger Fluminense Kaiki for 12 million euros
Fonseca on 1:1 with Atalanta: Roma was better in the second half and showed character
Five years ago, esports was building its own Super League. The project failed due to the dissatisfaction of the players
Keylor Navas is the best Ligue 1 player in March
Rodgers on 3-0 with West Brom: Leicester can play much better