Prime Minister Justin Trudeau leaves today for Europe, where he will participate in high-stakes talks with other world leaders about pressing issues like climate change and the race to vaccinate people in low- and middle-income countries.

While much of the nearly week-long trip will be dominated by the G20 meeting in Rome and the subsequent 26th "conference of the parties" (COP26) climate summit in Glasgow, Trudeau has carved out time for an official visit to the Netherlands, a country with close historic and diplomatic ties to Canada.

A government official, speaking on background to reporters at a briefing ahead of the trip, said Trudeau was invited by Dutch Prime Minister Mark Rutte to "really deepen the ties between our two countries, which are already very deep." Rutte made a trip to Canada in 2018 and Trudeau is "returning the invitation," the official said.

The two countries are closely aligned on foreign policy matters, the official said, pointing to ongoing cooperation on the climate file as the two nations push other developed countries to do more to help turn back rising global temperatures.

In an interview with CBC News, Ontario Independent Sen. Peter Boehm, a former G7 sherpa, said Rutte and Trudeau can use the diplomatic face time to discuss how best to approach the Rome summit.

The G20 countries alone represent 80 per cent of the global economy and the bulk of annual greenhouse gas emissions. That makes the Rome summit — coming just before COP26, where the position of G20 nations will be critical — especially important.

A meeting of the G20 environment ministers arrived at an impasse earlier this year when it failed to reach an agreement on priorities like phasing out coal and limiting global warming to 1.5 C. Multiple countries, including China, India, Russia and Saudi Arabia, balked at some of the proposed language.

Canada and the Netherlands could help broker a pragmatic solution through creative "wordsmithing," Boehm said.

"It's a friendly, easy relationship and I would say, since the prime minister is on that side of the Atlantic anyway, renewing that friendship is entirely appropriate in terms of the way these things go," Boehm said, noting that Trudeau and Rutte — who leads the centrist People's Party for Freedom and Democracy — are ideologically aligned.

"They'll discuss bilateral issues, global concerns and they will compare notes on COP going into Glasgow." 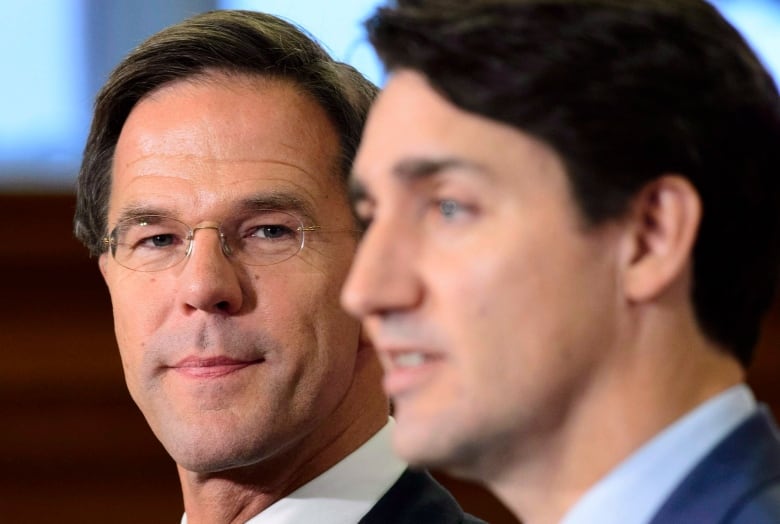 During a stop in the Hague, the diplomatic capital of the Netherlands, Trudeau is expected to deliver an address to parliamentarians at the Binnenhof. He's then scheduled to travel with Princess Margriet — a member of the Dutch royal family who was born in Ottawa while in exile during the Second World War — to lay a wreath at the Bergen op Zoom Canadian war cemetery in the country's south.

7,500 Canadian soldiers died during liberation of the Netherlands

The Canadian-Dutch relationship is undeniably defined by the two countries' shared experience during that bloody conflict. More than 7,500 Canadian men and women died while liberating the Netherlands from Nazi rule in late 1944 and early 1945, before Germany's surrender.

"We are forever grateful to those brave Canadian soldiers who carried the light of freedom to our country in its darkest hour," Rutte said during his 2018 address to the Canadian Parliament. "This, we will never forget." 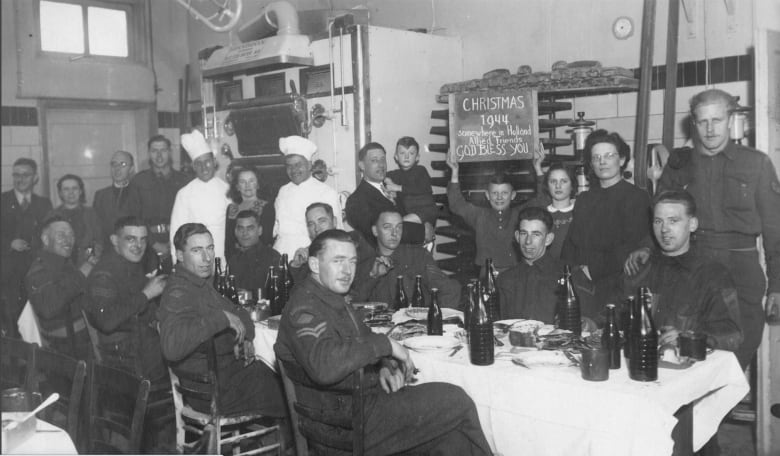 A Dutch boy holds a sign reading “Christmas 1944 somewhere in Holland. Allied Friends GOD BLESS YOU” at a Christmas dinner for Canadian soldiers in the Netherlands in 1944. (George Metcalf Archival Collection/Canadian War Museum)

Geoffrey Hayes is a professor of history at the University of Waterloo and an expert on the First Canadian Army's liberation of the Netherlands. A frequent visitor to the country, Hayes said he's always struck by the respect Dutch civilians show to the former Canadian soldiers who helped free that country after a brutal eight-month-long military campaign.

"I remember, in the 1990s, at the 50th anniversary of the liberation, Canadians were invited over and it was just overwhelming to see the Dutch villagers who were swarming these old Canadian veterans. They were like rock stars. It really was something. The reception was quite extraordinary," Hayes told CBC News.

"They appreciate the Canadian involvement in a way that most Canadians just don't understand. A lot of guys got killed in eight to 10 months of the war and it's something that the Dutch recognize about the Canadian position."

While helping the Dutch secure their freedom, the Canadian victories also helped to shore up crucial supply lines to Allied armies as they continued their push toward Germany.

"We often suggest that the war was over by early '45 but it certainly wasn't in the towns and villages of the Netherlands that were liberated by the Canadians," Hayes said. "It's one of the overlooked elements of the war. We weren't charging towards Berlin and weren't rushing to occupy Germany." 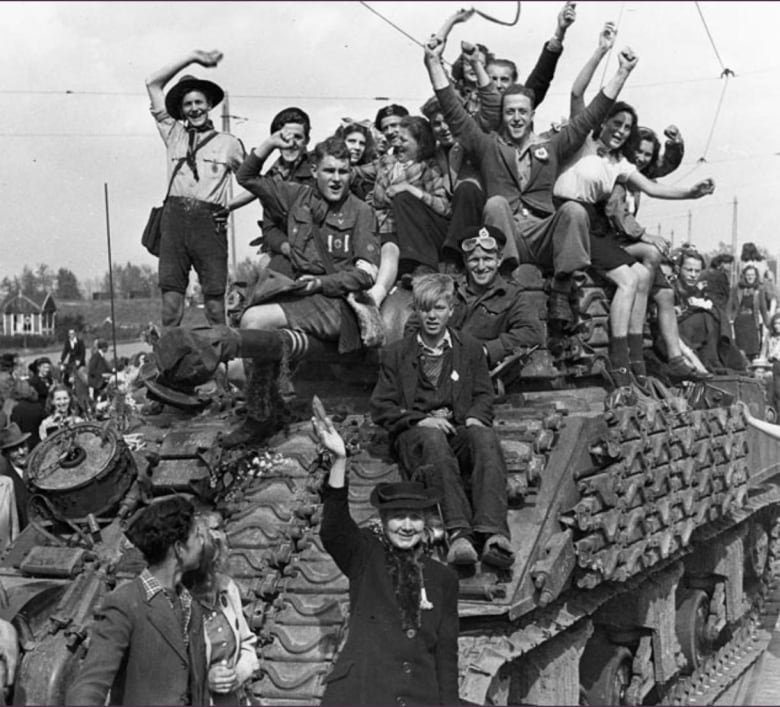 Civilians surrounding a Sherman tank of the 4th Canadian Armoured Division during the liberation of Hilversum, the Netherlands, 7 May 1945. (George Metcalf Archival Collection/Canadian War Museum)

After the war, Canadian engineers helped to replace blown-out dikes, desalinate contaminated soil and "get people back on their feet after the fighting," Hayes said. Canadian civil affairs officers also helped local officials restore democratic institutions like town councils that were marginalized under German rule.

The three Canadian war cemeteries in the Netherlands — including the one in Bergen op Zoom that Trudeau will visit Friday — are immaculately maintained by both the Commonwealth War Graves Commission and the Dutch villagers who live nearby.

"It's a tradition in many families there to tend to specific graves," Hayes said.

Princess Juliana — who later reigned as Queen of the Netherlands from 1948 to 1980 — went with her family into exile in Canada during the Nazi occupation of their country, staying at the Stornoway residence in Ottawa. (Stornoway, a beautiful but modest mansion in the Rockcliffe Park neighbourhood, is now the official residence of the leader of the Official Opposition.)

Juliana gave birth to Margriet at the Ottawa Civic Hospital in 1943 and Canada temporarily ceded its claim to that territory to ensure the young princess was born a Dutch national. The diplomatic gesture ensured Margriet would not be kept out of the line of succession to the throne. 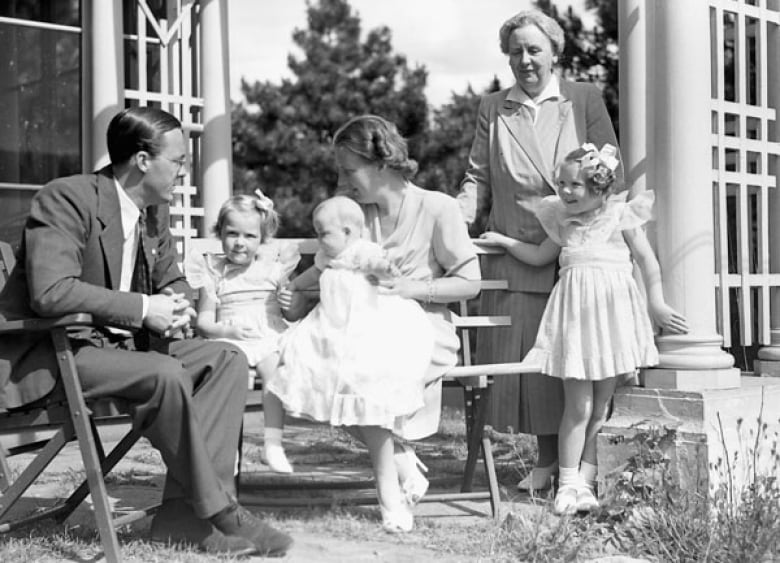 Princess Juliana of the Netherlands holds an infant Princess Margriet at Stornoway in Rockcliffe, their home during the Second World War. (Library and Archives Canada/Yousuf Karsh/PA-192854)

"The Dutch royal family is really quite unpretentious. They were part of the scene in Ottawa, they were seen freely walking around with their children — that was obviously appreciated," Hayes said, noting that the Netherlands still sends Ottawa roughly 10,000 tulip bulbs each year to repay the kindness shown by Canadians at a time of crisis.

"Those kinds of links are in the far distant past but they're important. There are really strong links now between Canada and the Dutch because of all this."

Cook this: Christmas glazed ham with clementines and cloves from Sea & Shore

U.S. House Jan.6 probe tells Meadows it has ‘no choice’ but to seek contempt charge

Instagram CEO to testify before U.S. Senate on safety of teen users

Is the ‘War on Drugs’ over? Canada is seeing a ‘shift’ in its approach to drugs, experts say

Two years into this pandemic, the world is dangerously unprepared for the next one, report says

Austria allows broad lifting of lockdown, but many provinces hold off

In the Habs' room: Canadiens' loss to Tampa Bay 'a hard pill to swallow'

Botswana, one of the first countries to detect Omicron, sees no rise in hospitalisations

From healing to disappointment, here’s what a papal apology could mean for residential school survivors

Knives that help any home chef keep their skills on point

Will COVID-19 boosters be required to be considered 'fully vaccinated'? Expert weighs in

On the map: Townhomes set to fill a four-acre site in the heart of Thornhill

Man in custody after 2 people stabbed inside Halifax apartment building

Chinese rover investigates 'cube' on far side of the moon

Botswana says no rise in hospitalization from Omicron, 70% vaccinated

France frees man who was held over suspected Khashoggi link