Prime Minister Justin Trudeau said today the CEO of Pfizer has personally assured him that the pharmaceutical company will send vaccine shots to Canada next month.

The promise from Dr. Albert Bourla, the company's top executive, comes after Canada learned it wouldn't receive a single vial of the highly effective vaccine next week, as Pfizer pauses some deliveries while it retools its Belgian manufacturing plant.

Maj.-Gen. Dany Fortin, the military commander leading vaccine logistics for the Public Health Agency of Canada, has said Pfizer's deliveries will be reduced by up to 50 per cent over a four-week period, punting as many as 400,000 doses to a later date.

"The next few weeks will be challenging when it comes to deliveries," Trudeau told reporters. "That said, Dr. Bourla assured me that hundreds of thousands of Pfizer doses will be delivered the week of February 15 and in the weeks to follow."

Trudeau said that, despite the delivery hiccup, the company still expects to meet its promised delivery target of four million doses by the end of March — enough shots to fully vaccinate 2 million Canadians with the two-dose regime.

When asked Tuesday if he would lobby Pfizer to send more doses, Trudeau said Public Services and Procurement Minister Anita Anand was the lead on the file.

The prime minister of Israel has had more than a dozen phone conversations with the CEO of Pfizer and the president of the European Union has personally reached out to the company's leadership.

Pfizer isn't treating every customer the same way. While Canada will receive no doses next week, the company said it "will be back to the original schedule of deliveries to the European Union beginning the week of Jan. 25." 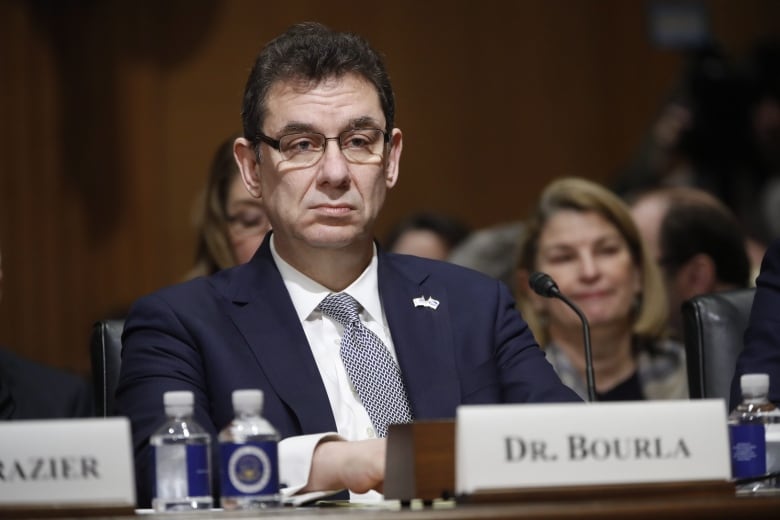 In this file photo, Dr. Albert Bourla, the chief executive officer of Pfizer, is pictured at a Senate finance committee hearing on drug prices in Washington. Bourla assured Prime Minister Justin Trudeau that the company will send vaccines to Canada in February. (Pablo Martinez Monsivais/AP Photo)

Pfizer is grappling with unprecedented global demand for its vaccine as the world scrambles to inoculate patients against the deadly novel coronavirus.

While the company had projected it could manufacture up to 1.3 billion shots this year alone, it is now shifting gears to pump out even more.

The company is making upgrades to its Belgian plant so that it can manufacture up to two billion doses this year. In order to complete those upgrades, some production lines will have to be idled and Pfizer won't have enough vials to go around in the short term to meet its previously promised delivery schedule.

Beyond the Pfizer product — which, to this point, had been delivered weekly — Canada is expecting shipments of the Moderna product to continue uninterrupted. Trudeau said about 500,000 Moderna shots will be delivered to Canada in February.

President of Atalanta on the refereeing of the match with Real Madrid: It was a shock. The referee is either inadequate, not ready for the Champions League match, or psychologically dependent
Otamendi on Guardiola: A monster. There is nothing better than working with such a coach
Henderson is out until at least April after surgery due to a groin injury
Barca presidential candidate Font on Laporte: The impression that the king is naked, and no one dares to say it
Manchester United still have an Interest in Kunde, but do not want to pay 80 million euros in compensation for the defender of Sevilla
In 2013, the former players of the Russian national team invested more than 200 million rubles in the bank. The money is still not returned
Lucescu about Dynamo Kyiv in the 1/8 finals of the Europa League: If they had said this in the summer, no one would have believed it
Source https://www.cbc.ca/news/politics/trudeau-pfizer-deliveries-1.5883941?cmp=rss

Hungary may have to tighten lockdown as COVID cases jump, PM says

U.S. air strikes on Iran-backed militias in Syria kill at least one fighter

Germany says there is exchange with U.S. on Nord Stream 2

Trump’s hold on Republican Party on display as conservatives gather

My Salinger Year a time of discovery for Sigourney Weaver

COVID-19 in Ottawa schools is on the rise, but still below peaks seen last fall

Science will lead the way on border reopening, U.S. secretary of state says

Poland to raise upper age limit for AstraZeneca vaccine to 69

Iran threatens to end deal with IAEA over U.S.-led push to criticize it

Ontario man fined $3.8K at land border crossing amid confusion over who's 'essential'

As a child, she beat bone cancer. Now she’s headed into space.

The U.S. secretary of state’s ‘visit’ and wayward seals: In The News for Feb. 26

Bitcoin falls over 6% to lowest in two weeks

U.S. Navy warship in the Middle East has COVID-19 cases, another ship to run tests

Union asks why junior school mask rule wouldn’t work in B.C. if it does elsewhere

Alberta's debt soars past $100B, stoking angst in government ranks

Black scientists around the world are calling for action, equality and representation