Vancouver’s Broadway Subway project has hit a milestone as two giant tunnel-boring machines are set to start excavating the future tunnels for the 5.7-kilometre SkyTrain extension.

They will be launched from the Greater Northern Way-Emily Carr Station and tunnel five kilometres west to Cypress Street, near the future Arbutus Station, the project’s terminus station, said B.C.’s transportation ministry on Friday.

In preparation for the machines, tunnel liner rings have been transported to the construction site, where crews have assembled a conveyor system to transport dirt and other excavated material out of the tunnel. Work on the stations along the line, which includes relocating utilities and building traffic decks, continues. 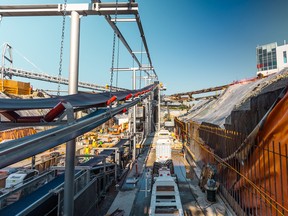 The conveyer belt rises out of the future Great Northern Way-Emily Carr station site towards the muck pit on the other side, where excavated material will be removed. Photo by Ministry of Transportation

The machines are expected to take about a year to excavate the subway line’s inbound and outbound tunnels, said the ministry.

Once that’s completed in late 2024, crews will finish building the underground stations and install the train tracks and supporting systems. Final steps include testing and commissioning the new line before it can open to the public.

The $2.83 billion Broadway Subway extends the Millennium Line from VCC-Clark Station to Broadway and Arbutus. It is expected to be completed in 2025 and transport about 150,000 people daily. 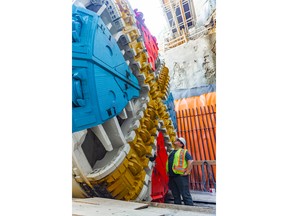 A close look at the cutterhead of the first tunnel boring machine prior to launch from the future Great Northern Way-Emily Carr Station. Photo by Ministry of Transportation 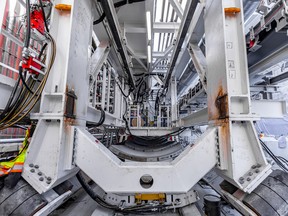 The steel gantry structure behind the tunnel boring machine. Once underground, the large wheels will rest on the completed tunnel section. Photo by Ministry of Transportation

Oklahoma hopes to return to winning ways against Kansas City

Ex-U.S. lawmaker arrested for conspiring to act as agent of Venezuela

Mexico pledges to complete huge elevated train in one year

As Red Cross heads to CHEO, other Ontario pediatric hospitals not requesting help

Arthur Smith: ‘Every position’ to be evaluated entering Falcons’ bye

B.C. to start public push to get more kids vaccinated against flu as cases climb

Vigil in Guelph for Montreal massacre anniversary to focus on ‘femicide’

‘Unbelievable’: Mama bear and 2 cubs use doggy door to break into B.C. home

John Ivison: Forget the buyback, spend the money on stopping guns from coming over the border

Polygamous cult leader accused of having 20 wives, many underage

No. 2 Texas rolls into Jimmy V Classic matchup vs. No. 17 Illinois

Minnesota board: Moorhead-made THC gummies are too potent

Expect 'difficult' December with COVID-19 and flu on the rise, Boileau says

Adam Pankratz: When it comes to capitalizing on LNG, Canada could learn a thing or two from Qatar

Kitchener continues to develop official plan for next four years