A Vancouver woman has compensation but few answers after a flight from her hometown to Calgary ended in a checked bag left in tatters.

Casey Dubyk, 27, flew to Calgary from Vancouver International Airport on Sept. 26 for a work trip.

The marketing co-ordinator normally only takes a carry-on bag, but before she boarded, she was told the volume of liquids in her small duffel bag was too great. She checked it instead.

When she and her colleagues deplaned at Calgary International, her bag wasn't there. An Air Canada rep told her it would come on the next flight and the airline would take down her info and deliver it to her hotel.

The bag was delivered. Sort of. 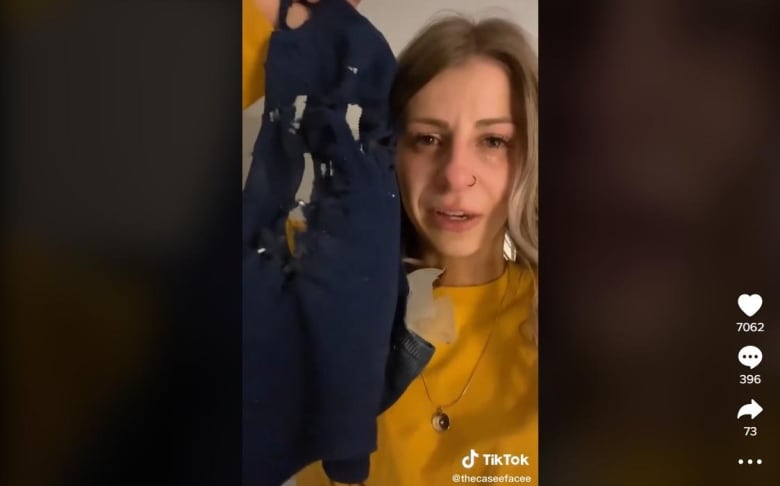 In a series of TikTok videos, Casey Dubyk showed off the tattered, torn clothing from her shredded bag. (@thecaseefacee/Tiktok)

"I'm like, oh, wait, why can I see my highlighter-yellow sweater in a closed bag?" she recalled thinking as she gazed upon it.

The bag had a huge hole torn into it. The clothing and other items inside, including expensive cosmetics, were largely shredded to tatters as well. Dark marks were seen on many of the items.

"The initial reaction was like, shell shock, laughing and then just crying."

Passengers may be entitled to compensation

A marketing professional — ironically, for a travel company — Dubyk recorded her opening of the battered bags in a series of TikToks that have racked up hundreds of thousands of views.

She complained to Air Canada, which has since reimbursed her and given her a $300 credit.

She says she's pleased the airline paid her back for the incident, but she still has no clear explanation as to what happened.

"There's a couple people that I guess work in baggage service that commented on the TikTok and they said that it looks like it got caught in the belt conveyor and then it just [had] a friction burn," Dubyk said.

She's also upset that no one from the airline gave her any warning or update about the bag before delivering it in such a state to her hotel room.

Air Canada, in a statement, said it always strives to handle bags with care.

"The overwhelming majority of bags arrive as expected," the statement said.

"Despite our best efforts, sometimes things don't go quite as planned and baggage may regrettably sustain damage, which can occur as it goes through airport baggage systems."

The Canadian Transportation Agency notes air passengers may be entitled to compensation of up to $2,300 if their bags are lost, damaged or delayed, and that it's important to file a claim right away.

Dubyk says if anything, this experience has reinforced her preference to go with carry-on bags whenever possible.

Lions win fourth in five games by romping past Jaguars

In North Carolina, vandals leave thousands in the dark

Soccer-Mane magic is the missing ingredient as Senegal sink

RAPTORS BLOG: Raptors rebounded in first vs. Magic after closed door meeting, will it continue?