Battle of Ontario games are so much fun that the Leafs and Senators decided to play two — in one day.

And hockey fans in attendance as the preseason kicked off Saturday at Scotiabank Arena weren’t complaining.

In fact, they were loving it.

“It’s my son’s first ever Toronto Maple Leaf game and mine too,” Melissa Loon said, while enjoying every minute with her son Benjamin, 5. “It’s so exciting.” 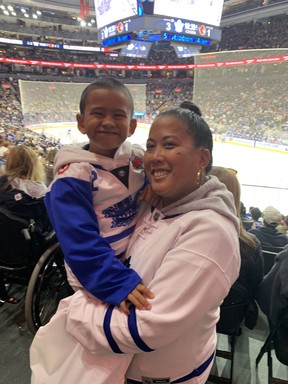 Part of that excitement was the fact there were so many families at these split-squad games. After watching stars such as Mitch Marner, John Tavares and Mark Giordano beat Ottawa 3-1 in the afternoon game, some fans stuck around to watch back-to-back Rocket Richard winner Auston Mattews take the ice against the Sens in the evening game.

No one cared that these were split-squad games or that it was only preseason action. They were just glad to be there because during the regular season tickets are not nearly as easy to come by — or as affordable.

Tickets for these games were selling for as low as $37 and up to $57. So fans, especially families, took full of vantage of it.

“We have never seen that many strollers before,” teased one usher. “So many of these people at their first game will be fans for a lifetime.”

Bruno Chivzi, 11, took in his inaugural Leafs game with his dad Rafael.

Nothing against the season ticket holders, but three things that were noticeable at these games were that the fans didn’t miss the beginning of each period, they cheered without being told to on the scoreboard, and they performed the wave.

Maybe they should do those hockey doubleheaders more often — or perhaps a hat trick of hockey games.

Tens of thousands march in Mexico City to support president

After being on opposite ends of comebacks, Oilers, Panthers meet

Rules around foreign-trained doctors to be loosened in B.C.

Win or else as U.S. plays supercharged group finale vs. Iran

Durham school board systems down after ‘cyber-incident’

No. 24 Purdue takes down No. 8 Duke, wins Phil Knight Legacy

No. 13 Auburn uses late run to get by Saint Louis

Pascal Siakam’s return imminent and much needed by Raptors

Britney Spears brands mystery celebrity as a ‘piece of s—’

Pelicans in need of bounce-back game vs. Thunder

PAGET: Getting the definition right in a new relationship

Focus Saskatchewan explores the dark past of a government-funded, church-run school

Lab-grown chicken coming soon to the U.S., but Canadians will have to wait

Riots break out in Belgium, Netherlands after Morocco’s win at World Cup: ‘Sad to see’

7 dead, including newborn, after landslide on Italy’s Ischia island