'We just need her back,' parents say to suspect in Amber Alert issued for 6-year-old girl

Police said they believe the car with Emma inside was stolen after the mother left it unlocked and running outside a strip mall at 11204 Railway Ave. in North Battleford at around 5 p.m. CST Sunday.

The direction of travel of the car is unknown, but police have expanded the search to Manitoba and Alberta.

Emma has epilepsy and autism, and police say she is non-verbal and can walk, clarifying an earlier report that she is unable to walk. Police said she is on medication for epilepsy that needs to be taken "in a strict timeframe" every 12 hours, and that missing a dose could lead to extreme medical distress. It's unclear if she has access to her medication. 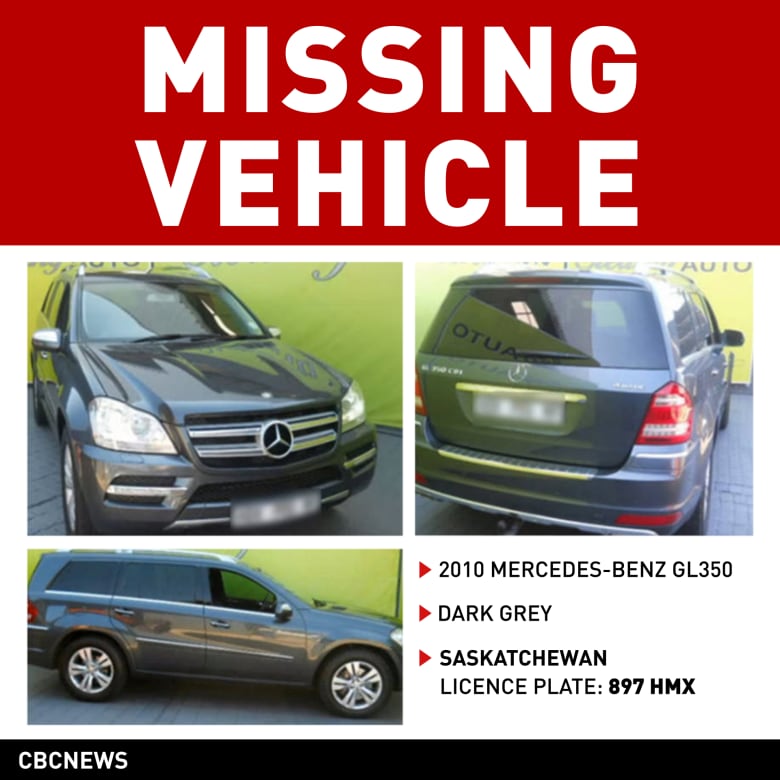 Six-year-old Emma O'Keeffe was in this car when last seen, and RCMP say the suspect is believed to be driving the dark grey 2010 Mercedes Benz GL350 Bluetec SUV, with Saskatchewan licence plate 897 HMX. (CBC)

When last seen, the girl was wearing a diaper, and also:

"We just need her back," Emma's parents said in a video posted on Facebook by the Saskatchewan RCMP.

RCMP Cpl. Rob King had a message for the person who stole the car: "Bring her back. Quite simply. Bring her to the nearest detachment…. Contact 911 yourself. Do whatever you can to get her back."

Police said highly trained investigators have been deployed to the North Battleford area and the RCMP Major Crime Unit is leading the investigation. Additional resources have also been deployed: A helicopter from Alberta RCMP and airplane from Saskatchewan RCMP are on standby in the event a search location is identified.

Police said the vehicle has a keyless system so when stopped, it would be immobilized. They believe there was half a tank of gas left in the car when it was taken.

There's no description of the person suspected to have taken her, but the person is believed to be driving a dark grey 2010 Mercedes-Benz GL350 Bluetec SUV, with Saskatchewan licence plate 897 HMX.

Police are asking gas stations across Western Canada to be on the lookout for this stolen SUV as the vehicle may attempt to stop and fill up at some point.

Krista Clark, a friend of the family, told CBC News that previous claims Emma can't walk are not correct.

"She can walk," Clark said. "She can move about freely. At home she walks from room to room.… They have to barricade the Christmas tree so that she doesn't take things she shouldn't have."

Police said they don't believe Emma could free herself from a car seat, but Clark said she's concerned.

"If she were to be removed from the vehicle and left on the side of the road, she would wander in any direction, into the road, into a field."

Clark also said the six-year-old doesn't respond to her name.

"If she were seen and people called out, 'Emma,' she wouldn't respond to it necessarily and she is not able to say that she needs help or that she doesn't know where she is."

Emma laughs when she's entertained and cries if she's upset, and can communicate non-verbally with family members, but is unable to speak.

If she were seen and people called out, 'Emma,' she wouldn't respond to it necessarily.- Krista Clark, family friend

Clark's main concern is that the child is brought home safely.

"Everyone we know in North Battleford is out looking right now for her."

Lampard on 3-0 with Watford: a dry Win at home, three goals scored-Chelsea played very well
Pulisic on 3-0 with Watford: Chelsea needed this win. We are confident that we can get into the top 4
Rebic scored 9 goals for Milan in 11 Serie A matches
Mikel Arteta: getting Arsenal into the Champions League seemed impossible a few weeks ago
Бав Bayern won the gold double in Germany for the 13th time
Neuer provided an assist in the German Cup final with Bayer
Sarri about 4:1 with Torino: Juve had a false sense of security after a couple of goals
Source https://www.cbc.ca/news/canada/saskatchewan/amber-alert-six-year-old-girl-north-battleford-sunday-1.4826174?cmp=rss

Huge day for jockey Rafael Hernandez at Woodbine, winning five races on the day including the two stakes events

Once a Leaf: Chris Kotsopoulos

COVID-19 Returns To P.E.I. As Alberta First Nation Under Lockdown

'It's a lot of hurt': Regina families cope with overdose deaths, encourage others to keep naloxone kits

Hope remains, but police say search for boy in Red River is now a recovery effort

The reopening deals at Vancouver Island hotels and resorts