White House pressure for more Iran sanctions is mainly serving to isolate U.S. from its allies

This column is an opinion by Sam Khanlari, a Toronto-based writer and editor. For more information about CBC's Opinion section, please see the FAQ.

The announcement of a nuclear accord between Iran and several world powers five years ago signalled the opening of a new chapter of relations between Tehran and the West. After more than a decade of impasse over Iran's nuclear program, the historic diplomatic agreement would ensure Tehran never obtained atomic weapons, and in exchange Iran's economy would be gradually re-integrated into the global financial system.

Fast forward to today, and despite the best efforts of the Trump administration, the deal clings to life. Although Iran has been largely deprived of the economic benefits within the agreement, the United States is the one isolated on the international stage after its repeated attempts at sabotaging the deal.

Last month, the United Nations Security Council roundly dismissed a U.S.-tabled resolution to extend an expiring arms embargo on Tehran. The motion represented the Trump administration's latest salvo to discredit the 2015 accord; the first one came when Donald Trump withdrew from the deal in May 2018.

The stage is now set for a showdown at the UN, as the United States pushes the Security Council — the body charged with ensuring international peace and security — into uncharted territory. U.S officials have vowed to penalize any country or entity that defies their call for sanctions to be reimposed on Tehran. 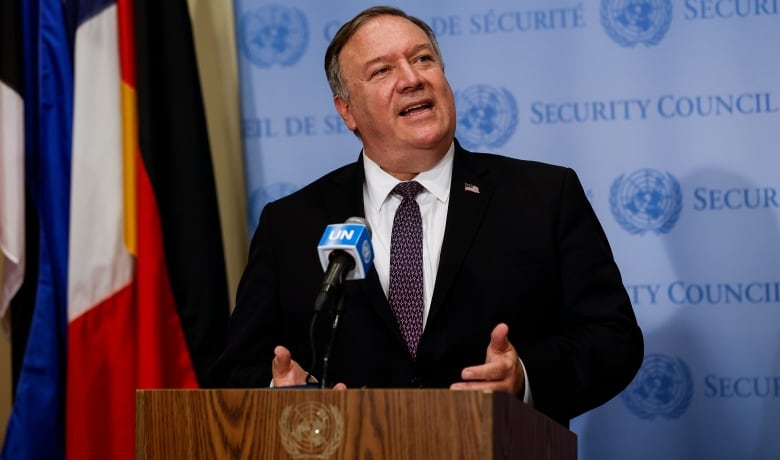 U.S. Secretary of State Mike Pompeo speaks to reporters following a meeting with members of the UN Security Council on Aug. 20 in New York. The Trump administration formally notified the United Nations of its demand for all UN sanctions on Iran to be restored, citing significant Iranian violations of the 2015 nuclear deal. (Mike Segar/Pool via AP)

The remaining members of the deal (Britain, China, France, Germany, Iran, and Russia) contend that the U.S. is no longer a participant, and therefore not in a position to alter the agreement's terms. Despite the difficulties posed by the U.S. withdrawal, they remain committed to the deal and have reportedly urged other nations to simply ignore the U.S. ultimatum.

Another arena for this geopolitical standoff is a Canadian courthouse, where the United States is seeking the extradition of Meng Wanzhou, Huawei's chief financial officer, following her 2018 arrest at a Vancouver airport on charges of violating U.S. sanctions on Iran. After withdrawing from the nuclear deal in 2018, the U.S. simply reinstated its previous sanctions, which allegedly contributed to Wanzhou's arrest.

At the heart of the extradition case lies what some say is the biggest strategic issue currently facing Canada's leaders, who are left in "a no-win position" picking sides between China and the United States. 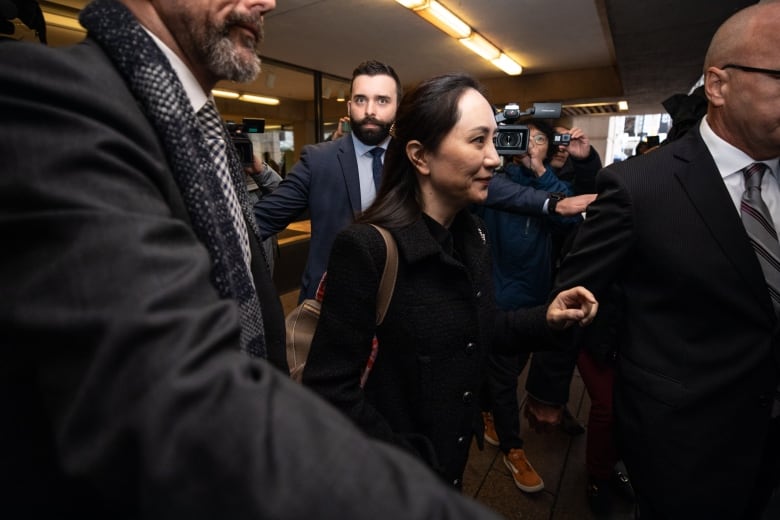 For its part, Ottawa does not have an Iran policy of its own.

Most Canadians' understanding of contemporary Iran is inextricably linked to the revolution in 1979 and the seizure of the U.S. embassy in Tehran. Cinematic adaptations provide reminders of Ottawa's involvement. This legacy, coupled with a supposed paucity of Canadian interests in the region, has helped limit discussion of Canada's foreign policy toward Iran to cautious engagement, complete isolation, or support for wholesale regime change.

As a result, Canadian politicians have often echoed their American counterparts' calls to delegitimize Iran's government. In 2012, Prime Minister Stephen Harper abruptly severed all relations with Tehran and enacted unprecedented legislation allowing for the seizure of Iranian state assets. "It's no coincidence that we closed the embassy basically the day after the legislation became effective," Dennis Horack, a retired Canadian diplomat, said in 2018.

Justin Trudeau campaigned on a pledge to restore diplomatic relations with Tehran in 2015, but his government is no longer committed to it.

Meanwhile, the U.S. currently enforces some 8,000 sanctions across 30 countries and territories. But not only have sanctions largely failed to achieve their stated policy goals, their impact on the health and welfare of local populations has been extensive. Even in the midst of the ongoing coronavirus pandemic, the White House has responded to calls for the U.S. to temporarily alleviate the impact of sanctions on Iranians by announcing additional ones.

In addition to continuing the <a href="https://twitter.com/UN?ref_src=twsrc%5Etfw">@UN</a> arms embargo, the UN sanctions we are restoring on Iran will also re-impose accountability for other forms of Iranian malign activity that the authors of the nuclear deal foolishly downplayed. <a href="https://t.co/VV9Rhkol40">pic.twitter.com/VV9Rhkol40</a>

As The Economist put it, "America is uniquely well positioned to use financial warfare in the service of foreign policy." Banks in Europe and Asia may be an ocean away, but the plumbing of international finance runs through U.S territory. And by leveraging its leading financial position, Washington has, according to the Boston Review, "effectively conscripted the worldwide banking system to enforce a punitive foreign policy that is actively opposed by most of the world's nations."

The split over the Iran nuclear deal and fear of U.S. penalties is having an impact on financial ties with traditional European allies.

Mark Carney, former governor of the Bank of England, recently proposed the formation of a global digital currency to "dampen the domineering influence of the U.S. dollar on global trade."

And in a speech last year, French President Emmanuel Macron recognized this ongoing "geopolitical and strategic reconfiguration," and added that, "I am not saying that we need to fight the dollar, but we need to build real economic and financial sovereignty." 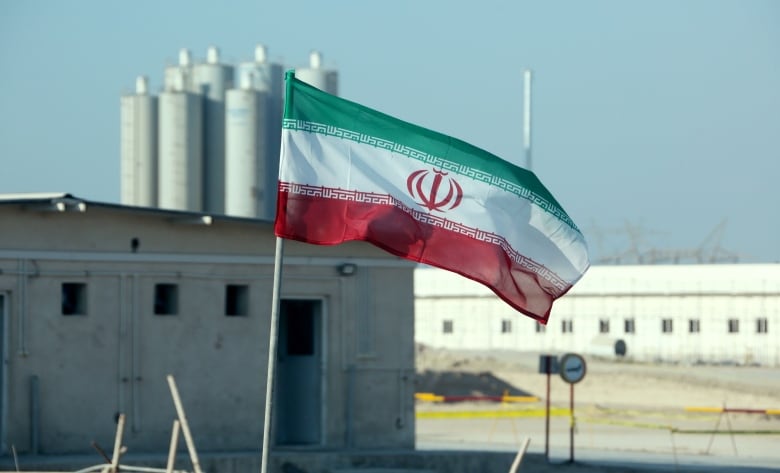 A November 2019 photo shows an Iranian flag outside Iran's Bushehr nuclear power plant, during a ceremony to kick-start work on a second reactor at the facility. Bushehr, Iran's only nuclear power station, has been running on imported fuel from Russia that is monitored by the UN's International Atomic Energy Agency. (Atta Kenare/AFP via Getty Images)

With nationalism on the rise, faith in many multilateral institutions developed in the postwar period is foundering. The UN Security Council has slowly morphed into a battleground rather than "a body that delivers effective management of peace and security challenges." There is growing interest in an alternative global payment system with the potential to help targeted countries skirt U.S. sanctions. There are varied predictions of the rise of civilization-states as ideological counterweights to Western liberal democracy, as the world economy enters an "Asian century."

In a major foreign policy speech just before the coronavirus pandemic, Canada's Minister of Foreign Affairs Francois-Phillipe Champagne highlighted some of the challenges associated with "the emergence of a multipolar world with new epicentres of influence and competition over ideas and models of governance."

A change in U.S. leadership next year would not reverse the currents driving these changes.

In tandem with the pandemic, these trends have, according to Roland Paris, an international affairs expert who has advised the federal government, "accelerated geopolitical shifts that show no sign of dissipating — and some of them jeopardize Canadian interests in ways that may be unfamiliar to a country long used to a more benign international environment."

By virtue of geography, Ottawa has held a favourable position alongside the world's superpower. As Paris noted recently, however, Canadian foreign policy has long been characterized by complacency, and the current moment necessitates "not only new policy approaches, but also different ways of doing foreign policy."

The atrophy of America's political and moral authority presents Ottawa with its most serious foreign policy challenge since the end of World War II. This leaves Canada and its European allies tasked with upholding — and ultimately reforming — the multilateral institutions that have animated the policies of Western countries for more than half a century.

Meanwhile, President Trump's destructive policies on Iran abuse this old world order and hasten the rise of a new one.

Juve are in talks with the sacked Sarri to terminate their contract. The coach received 5.5 million euros a year
Fonseca Pro 0:0 with CSKA Sofia: The quality of Roma's game in Serie A is different, but that's normal. Rotation is needed
Wolfsberg midfielder Lindl is among the contenders for the Europa League player of the week. He scored 3 goals for Feyenoord
Arteta after 3:0 with Dundalk: now it will be more difficult for me to choose the starting line-up for Arsenal
Cherchesov congratulated Maradona on his 60th birthday: Human happiness, Diego!
Milan - the first club to have 3 players born after January 1, 1999 scored in a Europa League/Champions League match
Zenith is necessary to protect the Semak. He can become as much of a legend as Semin is to Loco. Sabitov about the coach of St. Petersburg
Source https://www.cbc.ca/news/opinion/opinion-united-states-iran-nuclear-deal-1.5727821?cmp=rss

As final weekend looms, Trump and Biden to barnstorm across Midwest

Penny-pincher or deal king? Arnault gets his discount in Tiffany takeover

NASA spacecraft collects up to 4.5 pounds of asteroid to be sent to Earth

Record number of women sworn in at Halifax city council

Despite COVID-19 and all of the controversy, Djokovic determined to become tennis’ GOAT

Family does not want officers who shot Black man in Philadelphia charged with murder: lawyer

QB Lawrence positive for COVID-19, out for No. 1 Clemson

New Zealand votes to legalize euthanasia but not cannabis

Man, 24, sought after gun found in taxi in Toronto

B.C. family who raised millions for their child’s rare drug pays it forward