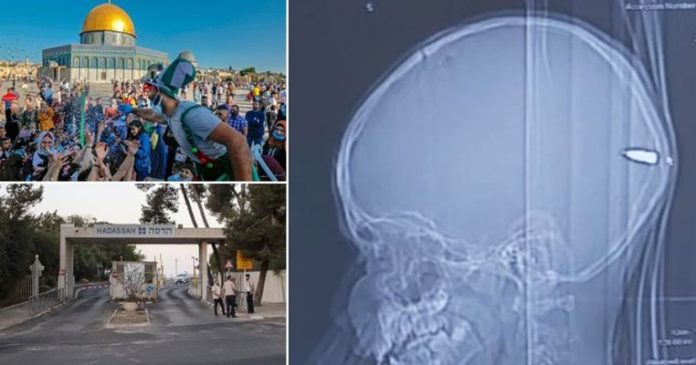 On the Muslim holiday of Eid al-Adha, in the Jerusalem neighborhood of Ras al-Amud, a stray bullet hit a 9-year-old boy in the head. It is believed the Palestinian child may have suffered the injury during Eid celebrations, which are often marked by people firing shots into the air. The child’s parents took him to the hospital after becoming concerned about how drowsy he was. He was conscious when he arrived at Hadassah Hospital Ein Kerem in East Jerusalem, but doctors realized that he had a small wound on his head and blood on his scalp.

The boy was then given a CT scan at Hadassah, which showed that a 3/4-inch bullet had penetrated the right side of his skull. It tore a path through his brain and was lodged just inside the skull’s left side. When the surgeon looked for the bullet though, it wasn’t where the scan showed it to be. “We turned the boy onto his stomach to give us the best access to the left side of his head,” senior pediatric neurosurgeon Dr. Guy Elor explains. “But when we began exploring”, he continues, “we could see exactly where the bullet should have been, but it wasn’t there. It seems that when we turned him, gravity took over.” 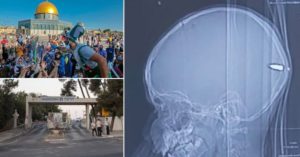 An x-ray image of a bullet lodged in the brain of a 9-year-old boy at Hadassah University Hospital in Jerusalem.

With the help of ultrasound and x-ray, Hadassah’s surgical team discovered that the bullet had receded several inches into the boy’s brain, implanting itself in the occipital lobe which includes the visual cortex. The bullet had traveled through the parts of the brain responsible for motor skills, behaviour and higher-order thinking, missing major arteries and veins by just a 10th of an inch.

Once the Hadassah surgeons found the bullet, they delicately removed it with a bayonet tweezer. Anesthesiologist Dr. Chloe Mimouni, emphasised that working a pediatric neurology case is particularly challenging and commented “I didn’t expect to be able to wake up the child and extubate him right away. But the Hadassah team —nurse, surgeons, and anesthesiologists — was great. Communication among us was perfect, as always with Dr. Elor, and that is why the outcome was even better than one might expect.” 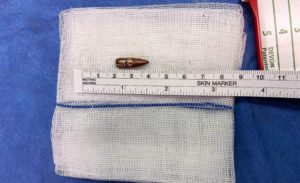 Multiple factors determine the extent of damage caused by a gunshot wound. These include the caliber of the gun, the size and speed of the bullet, the trajectory, the site of the injury and the surgical team’s skill. “It’s quite remarkable,” says Dr. Elor, “that two days after the surgery, the boy is eating, talking, and moving his limbs.”

Flick on Bayern: Our goal is to stay on top
Goalkeeper Alcoyano has 10 saves in the match with Real Madrid. Most of all in the season among the rivals of Madrid
De Bruyne has a suspected muscle injury. He was replaced in the game against Villa
In Spanish for 70 years there is a phraseology about Alcoyano. It's about an outsider who does not give up until the last
Andrea Pirlo: Criticism is inevitable when you are suddenly appointed Juve coach, but the results will say everything for me
Zidane on relegation from the 3rd League club: It's not a shame, let's not go crazy. Real Madrid wants to win, sometimes it doesn't come out
Real Madrid were eliminated from the Spanish Cup for the fifth time by a team from the 3rd league
Source https://24h.com.cy/2020/11/hadassah-successfully-treats-9-year-old-with-bullet-lodged-in-his-brain/

Edek says it will vote for budget

Search called off for missing swimmer