Stretch Of Death Claims Another Life

A stretch of road at Varavu, Ba, has claimed the life a man believed to be in his 50s after a tragic accident on Sat­urday night.

Pandit Rejendra Prasad de­scribed the horror as he witnessed the ordeal take place in front of his home.

The deceased, who is yet to be identified, was walking on the road when he was allegedly hit by a vehicle.

Mr Prasad was in the sitting room of his house—when he heard a loud noise.

It was around 7.15 pm when the incident happened.

“I rushed out of my house as soon as I heard the noise,” Mr Prasad said.

“The first thing I saw was some­thing lying on the road. I could tell that it was the body of a man.

“It was horrific to see a person’s body lying on the road.

“The impact must have driven the man’s body 25 yards further from the initial point of contact.”

Mr Prasad’s next reaction was to immediately contact the emergen­cy numbers.

“Unfortunately there was no re­sponse from anyone,” he said.

“The vehicle involved in the acci­dent then parked about 30 metres away from where the man had been lying.

“People started gathering at the scene but the accident victim failed to show any sign of life.”

Mr Prasad said no one could touch him until the Police or offi­cial first responders arrived.

Mr Prasad said that the man’s e-Transport card and lighter was confiscated by the Police.

Mr Prasad said the one kilometre stretch of road had been the lo­cation of major accidents in the past two years.

“Five accidents have already happened along that stretch this year, unfortunately this one claimed a life,” he said.

“The stretch also claimed a life last year as well with other non-fatal accidents.”

Mr Prasad has made numerous requests for a road hump to be constructed because a school and a community of more than 480 people reside around the Varavu area. 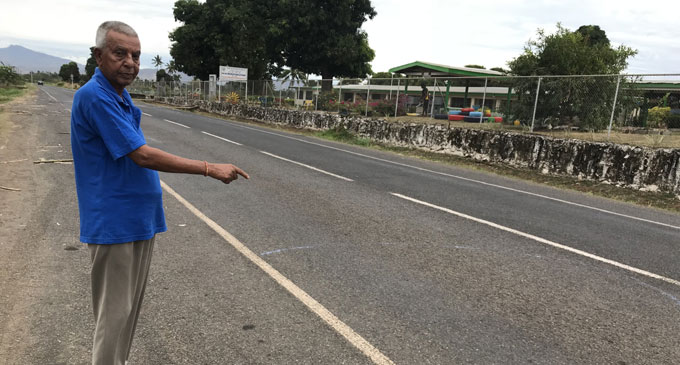 Pandit Rajendra Prasad at the scene of the accident. Photo: Yogesh Chandra

Varavu Muslim Primary School has a roll of more than 400 students who use the road daily.

“I’m lucky to be alive after being involved in an accident during May of this year. An overtaking vehicle had hit my vehicle.”

“I sustained minor injuries only. I was lucky to come out alive.”

For now, Mr Prasad is pleading for drivers to cut down on their speed along that stretch and that road humps are built to contain over speeding.

P o l i c e spokesperson Ana Naisoro con­firmed that a man died after he was allegedly hit by a vehicle along the Kings Road in Varavu, Ba.

Ms Naisoro said it was alleged that the victim had suddenly crossed the road when he was bumped by the vehicle driven by a man in his 40s who was heading towards Ba.

After the fatal accident in Ba, the road death toll stood at 52 com­pared to 47 for the same period last year. Edited by Percy Kean

Zidane on the win over Getafe: These three points are very important. There are 5 finals ahead
Borussia agreed to transfer 17-year-old midfielder Birmingham Bellingham for 23 million euros
Getafe goalkeeper Soria on 0:1 with Real Madrid: a Draw would have been fairer
Courtois has kept 16 clean sheets in the League – more than anyone in the top 5 leagues of Europe
Ex-referee Andujar Oliver: Carvajal was clearly knocked down in the Getafe penalty area. A clean penalty
Carvajal on 1-0 with Getafe: we Should have taken advantage of Barca's misfire. Everything depends on us
Gattuso on 0:2 with Atalanta: I'm furious. I didn't like the attitude of the players
Source http://fijisun.com.fj/2018/09/17/stretch-of-death-claims-another-life/

India-China Face-Off: Was it Inevitable?

$6.95 Million Worth Of Marijuana Plants Found In Kadavu

HUNT FOR KHAIYUM'S 30 PHANTOM BILLIONAIRES: Waves of names wash up on Fijian shores. Now it is Larry Page, his family, and his staff

Launch Of “Get Safe Online” In The Pacific

Fiji Could Play With 6 Nations

India-China Faceoff: Was It Inevitable?

USP Saga: Recused Council Members Not Invited Back For This Week’s Council Meeting

Rabuka Back In Office At Opposition Chambers

Shipping Is A Necessity Regardless Of Crisis

162 RFMF Soldiers From Sinai In The Clear

When Are We Going To See A Stop On Violence And Abuse Of Our Women?

Khan’s Death A Loss For The Nation

New Fuel, LPG Prices To Be Effective From Tomorrow

US Couple Stuck In Fiji Raise $60K For Animals Fiji

Three Curfew Arrests Made In The Last 24 Hours

ALL PUMPED UP for his clients: Lawyer Devanesh Sharma and Aman Ravindra Singh square off in Bainimarama-Khayium Defamation case

Management Board Has The Final Say Says Suspended Party President

Cunningham River Tragedy: 14 Year Old Petero Was Eager To Get Back To School

Back To School: Raibe Looks Forward To A Challenging Start

Rabuka Faction Not Ready To Give Up

SODELPA (In Suspension) Leadership In Limbo

Troops From Sinai Back Home, Go To 14-Day Quarantine

Let’s Go Local: Frolick In The Thrills Of Whitewater Rafting