A Euge turn off

Prince Andrew – who wants his daughter to have a bash as big as Harry and Meghan’s – had been trying to strike a deal with the network to screen the ceremony.

But BBC executives fear it would be a ratings flop.

ITV is now understood to be considering stepping in.

A source said the royals think the Beeb has “dropped the ball” because the October 12 event will be “huge”. 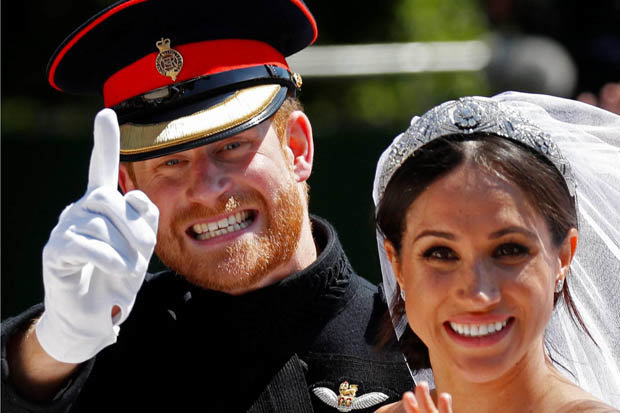 “BBC right (for once) to reject coverage”

One wrote: “Who is interested or cares about the wedding of this nobody couple?

“BBC right (for once) to reject coverage.”

Another asked: “Why would people watch this bunch of wasters spend the taxpayers’ hard earned cash?”

A third said: “It is absurd for Andrew to expect people to watch, or even care about, his daughter’s wedding. Nobody gives a damn.”

Yet another messaged: “Andrew needs to let it go and accept that no-one’s bothered.”

Eugenie, 28, and her boyfriend of eight years Jack Brooksbank, 32, announced their engagement in January.

The ceremony is at the same venue as Harry and Meghan – St George’s Chapel at Windsor – and they have invited a string of celebrities such as the Beckhams, George Clooney and his wife Amal, and pop star Robbie Williams.

The security bill is set to top £2million because the couple want to make it so spectacular. Like the BBC, Sky plans to run no more than snippets.

A source said: “The feeling at the Palace is that the BBC has dropped the ball.

“At the end of the day this is going to be a huge Royal Wedding with all the senior members of the Royal Family in attendance.

“But nobody wants to take the risk and spend the money it would cost to put it on air.

Agent de Bruyne: Kevin is not thinking about leaving Manchester City. 90% of news is nonsense
Ronaldo is the king of alcohol. I was out with Vieri, begging for beer from the media, and I figured out how to drink in front of the coach
MLS is back: almost 9 minutes of protest against racism and a giant virtual adidas logo in the center of the field
Solskjaer on MATIC: I'm Glad he stayed. We need experience in a team with children who run around
Germany manager Bierhoff: Havertz is a player for Real Madrid
Buffon's agent: Gianluigi should become a coach. He can lead Juve
Barcelona won the court against Santos in the Neymar case. The Brazilians demanded more than 61 million euros
Source https://www.dailystar.co.uk/news/latest-news/730132/Princess-Eugenie-wedding-BBC-rejected?utm_source=feedburner&utm_medium=feed&utm_campaign=Feed%3A+daily-star-latest-news+%28Daily+Star+%3A%3A+News+Feed%29

Gyms, weddings and theatres: Which announcements are expected in this week's Covid update

ADVERTORIAL: How to get a holiday from £10pp* in the South Wales Echo and Evening Post

Police statement on drone and a helicopter operation in west Hull

UK coronavirus death toll rises by 85 in past 24 hours

Topshop announces up to 70% off sale with deals on sandals, summer dresses and more

Denise Welch opens up about her depression battle after giving birth

ADVERTORIAL: How to get a holiday from £10pp* in the Chronicle

England’s coronavirus outbreak is shrinking as cases have HALVED with 1,700 people infected each day

Woman armed with a knife shot by police during major incident

When will saunas and steam rooms be allowed to open?

Sadler’s Wells gets £1.5 million grant to stave off financial collapse over the summer

Trump tax returns: Supreme Court rules president does not have to reveal financial documents to House

Man told mother he 'dreamed' of decapitating her and his father

Argos slashes the price of LOL Surprise toys with people racing to bag a £3.50 bargain

Great-grandma, 71, ‘murdered by neighbor’ after she refused to stop sunbathing naked

Teesside job boost after response to government consultation on Freeports

Weird ‘gel-like’ substance on the moon is finally identified

Pubs, hairdressers and shopping centres can reopen in Stirling next week

How to watch Liverpool vs Burnley on TV, what channel it is on and match odds

Toxic hand sanitiser urgently recalled over fears it can cause blindness

Who was Chris Brown and why was he murdered by Raoul Moat?

Who is Naya Rivera’s son Josey Hollis Dorsey and why was he found alone in a boat in Lake Piru?

Updates as police use helicopter and drone in frantic Hull search

EXCLUSIVE: Kilmarnock interested in defender as Dyer looks to add to squad

This is going to hurt! Brexit alarm bells ring as Lagarde makes bleak prediction for EU

Update details to make sure you can vote

Everybody loves Mohamed Salah but this is harsh on Neco Williams