The global bond market is suffering its worst start to a year since 2015 as investors grow increasingly confident that the rollout of Covid-19 vaccines will boost economic growth and fan serious inflationary pressures for the first time in decades.

The Bloomberg Barclays Multiverse index tracking $70tn worth of debt has lost 1.9 per cent since the end of last year, in total return terms that account for price changes and interest payments. If sustained this would be the worst quarterly performance since mid-2018 and the sharpest first-quarter setback for the broad fixed income gauge in six years.

The bond market reversal started gathering steam in January, when the Democrats won control of the US Senate and raised the prospect of a more forceful stimulus package to heal the damage caused by the coronavirus pandemic. But the sell-off has accelerated and broadened markedly in recent weeks.

Most of the pain has befallen highly rated but low-yielding government debt, which is particularly vulnerable to faster inflation that eats into interest payments and returns. Longer-term US Treasuries have lost more than 9 per cent on a total return basis this year, according to a Bloomberg Barclays index of US government bonds.

“We may finally once again be on the road to reflation,” said Ed Yardeni of Yardeni Research. “I’m seeing more and more signs of mounting inflationary pressures as a result of the unprecedented stimulus that fiscal and monetary policymakers are providing in response to the pandemic.” 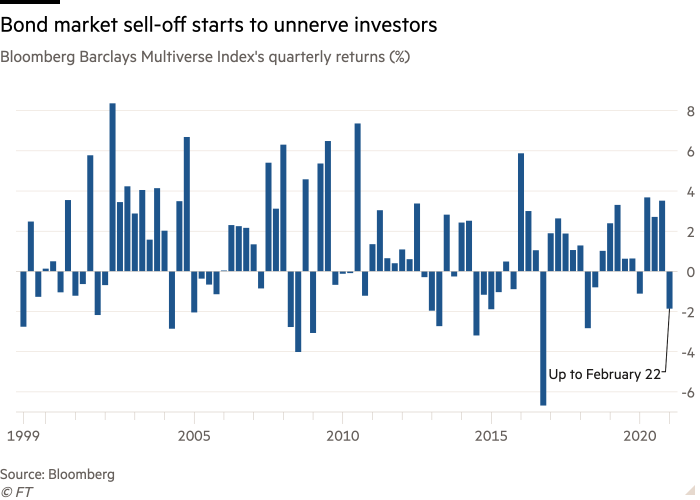 The flip side of sinking prices is that yields have shot up across the world in recent weeks, with the 10-year US Treasury yield climbing from 0.9 per cent at the start of 2021 to almost 1.4 per cent on Tuesday, the highest since before the coronavirus pandemic started hammering markets a year ago. Australia’s 10-year yields have already surpassed their pre-pandemic levels, while Japan’s have poked above 0.1 per cent for the first time since 2018. UK yields are on track for their biggest quarterly rise since 2013.

The fixed income sell-off has started to ripple through global equities, and led some analysts to predict a repeat of past battles between bond markets and spendthrift governments and central banks.

Yardeni was the Wall Street analyst who was the first to coin the expression “bond vigilantes” in the early 1980s to describe how fixed income markets occasionally bullied governments and central banks into more austere policies. He now reckons they may be making a comeback.

“The bond vigilantes seem to be saddling up and getting ready to ambush the policymakers on the road to reflation,” he wrote in a note to clients on Tuesday. “It could be a heck of a shootout.” Analysts say historically low bond yields have been a key fuel for the broad-based and dramatic rally across financial markets since the nadir in March 2020. Stocks are already showing signs that the pick-up in yields is biting.

Gregory Peters, a senior fund manager at PGIM Fixed Income, said the moves were reminiscent of a “mini taper tantrum 2.0”, a reference to when the Fed’s announcement in 2013 that it would curtail its bond-buying programme rattled global financial markets.

“The move higher is starting to spook other markets,” Peters said. “Stocks are squishy, and corporate bonds are squishy . . . It’s causing people to freak out a little.”

He suspects that the severity of the bond market sell-off may be getting overdone, but is — for now — wary of betting on the rout fizzling out. “When you’re staring down the barrel of double-digit GDP growth data, stimulus as far as the eye can see, and central banks on hold, you’d have to be brave to step in front of this,” he said.

The challenge is that central banks have committed to keeping monetary policy exceptionally easy even if inflation does accelerate — a commitment that some traders are now beginning to test. 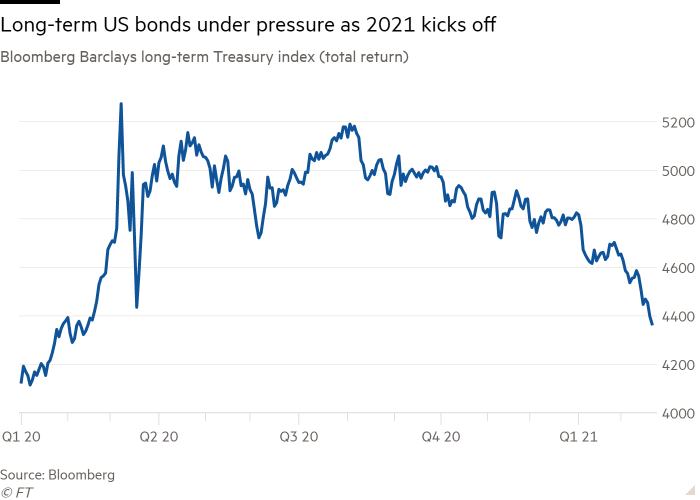 Central banks appear to be growing perturbed at the sell-off, which has the potential to pump up lending rates at a delicate time for the global economy. The Reserve Bank of Australia restarted its bond purchases this week to quell the rise in its government bond yields, and European Central Bank president Christine Lagarde on Monday said that policymakers were “closely monitoring” the situation.

On Tuesday, Fed chair Jay Powell hailed signs that the economic outlook was improving, but stressed that the US central bank would continue to stimulate demand for the foreseeable future, and argued that stubbornly low inflation was still a greater danger than a durable acceleration.

“The economy is a long way from our employment and inflation goals, and it is likely to take some time for substantial further progress to be achieved,” Powell said in a prepared speech to Congress. “We will continue to clearly communicate our assessment of progress toward our goals well in advance of any change in the pace of purchases.”

The Northumberland home with its own river, fishing rights and jetty

The full inside story on the Cardiff Rugby re-brand

The target: an Israeli-owned commercial ship at sea. The culprit: Iran, says Netanyahu

Large fire breaks out as smoke billows across city centre

Writer's prose to be permanent feature in Hull's Queens Gardens

France vs Scotland new date: When will postponed Six Nations rugby fixture be played now and why was it cancelled?

Ghd max styler review: Can the wide-plate straightener really cut styling time in half? We put it to the test

Senate could pass relief bill with $1,400 stimulus checks THIS WEEK – but $15 minimum wage set to be dropped

Can you spot the deadly snake that’s perfectly camouflaged in the grass?

Three arrested after drug cops swoop on property in Fife

'Lockdown sex with my drunk boyfriend is so boring and frustrating'

Plans for Roath Park 'could cause irreversible damage' say locals

WWE chief Vince McMahon thought ‘nobody is interested in me’ ahead of Netflix series into ‘amazing’ story, says Triple H

Liverpool in the spring sunshine

Lions, tigers and cheetahs among 4,000 dangerous wild animals kept as pets in UK

Guardiola insists Bayern are still best team in Europe and NOT Man City despite 20 wins in row… but what do stats say?

Woman ‘cuffed after queuing for coffee two miles from her home’

Jacqueline Jossa forced to deny filtering photos of herself and daughter Ella, 6

Girl, 9, is savagely beaten to death during ‘exorcism’ by mum who feared she’d been possessed by the devil

British Airways data breach: How to claim up to £6,000 compensation as deadline extended

CCTV appeal after theft of car at Sutton-in-Craven, near Keighley, and subsequent crash

Budget: One million more people could be living in hardship by May, Rishi Sunak warned

David Cameron insists Brexit referendum was 'thought through' and necessary

Who is FBI Director Christopher A. Wray?