Fightfighters wearing breathing apparatus have stormed a historic pub in Rye, East Sussex after a fire broke out in the roof.

The cause of the fire at award winning pub, the George, is not yet known.

Footage from the scene shows thick smoke billowing out from the roof of the pub while fire fighters rush to tackle the blaze.

Around 40 firefighters from Rye, Hastings, Broad Oak and Bexhill were called to the 18th century pub at around 4.40am.

It’s understood the fire started on the ground floor.

The High Street is closed to traffic. 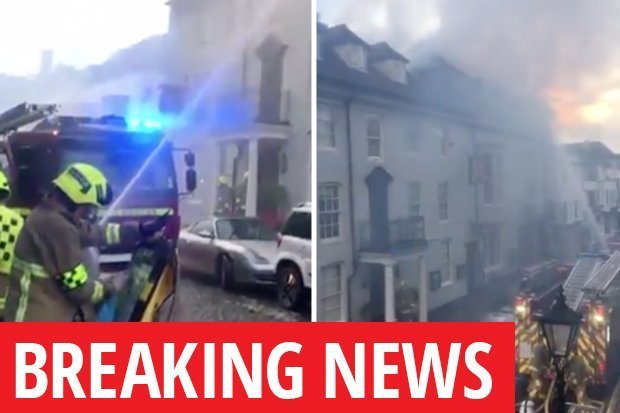 A spokesman for East Sussex Fire and Rescue Service said: “As of 7.30 crews continue to deal with a fire in the roof of the George In Rye hotel, High Street Rye.

“Eight fire appliances, including the Command Control Unit and Aerial Ladder Platform, are in attendance.

“Firefighters are using breathing apparatus to tackle the fire in the four-floor building and we are advising people to avoid the area.”

This is a breaking news story and is constantly being updated.

Please refresh the page regularly to get the latest updates.

Reporters working on dailystar.co.uk will be working to source the latest information, reaction, pictures and video related to this story.

Or download the Daily Star app for flash alerts on the biggest stories of the day.

Pep Guardiola: I would have stayed at Manchester City and in League 2
Manchester United is ready to sell Alexis, Lingard, Smalling, Dalot, Jones and Rojo
Frank Lampard: I expect more from Chelsea, but now the result is most important
Atalanta does not lose 15 matches in a row – 13 wins and 2 draws
Lorient threw one newcomer off a plane and sent another under the water-all for the sake of presentations on social networks
Pasalic scored a hat-trick in the match against Brescia. Atalanta smashes the opponent 6:1
Rummenigge on Ribery: Hennessy was like a second father to him, and I was like a second mother
Source https://www.dailystar.co.uk/news/latest-news/793021/breaking-rye-pub-fire-the-george-east-sussex?utm_source=feedburner&utm_medium=feed&utm_campaign=Feed%3A+daily-star-latest-news+%28Daily+Star+%3A%3A+News+Feed%29