Ethel Foster, 91, said there were no signs there was anything wrong when Lee Ridley of Consett, Co Durham, was born. 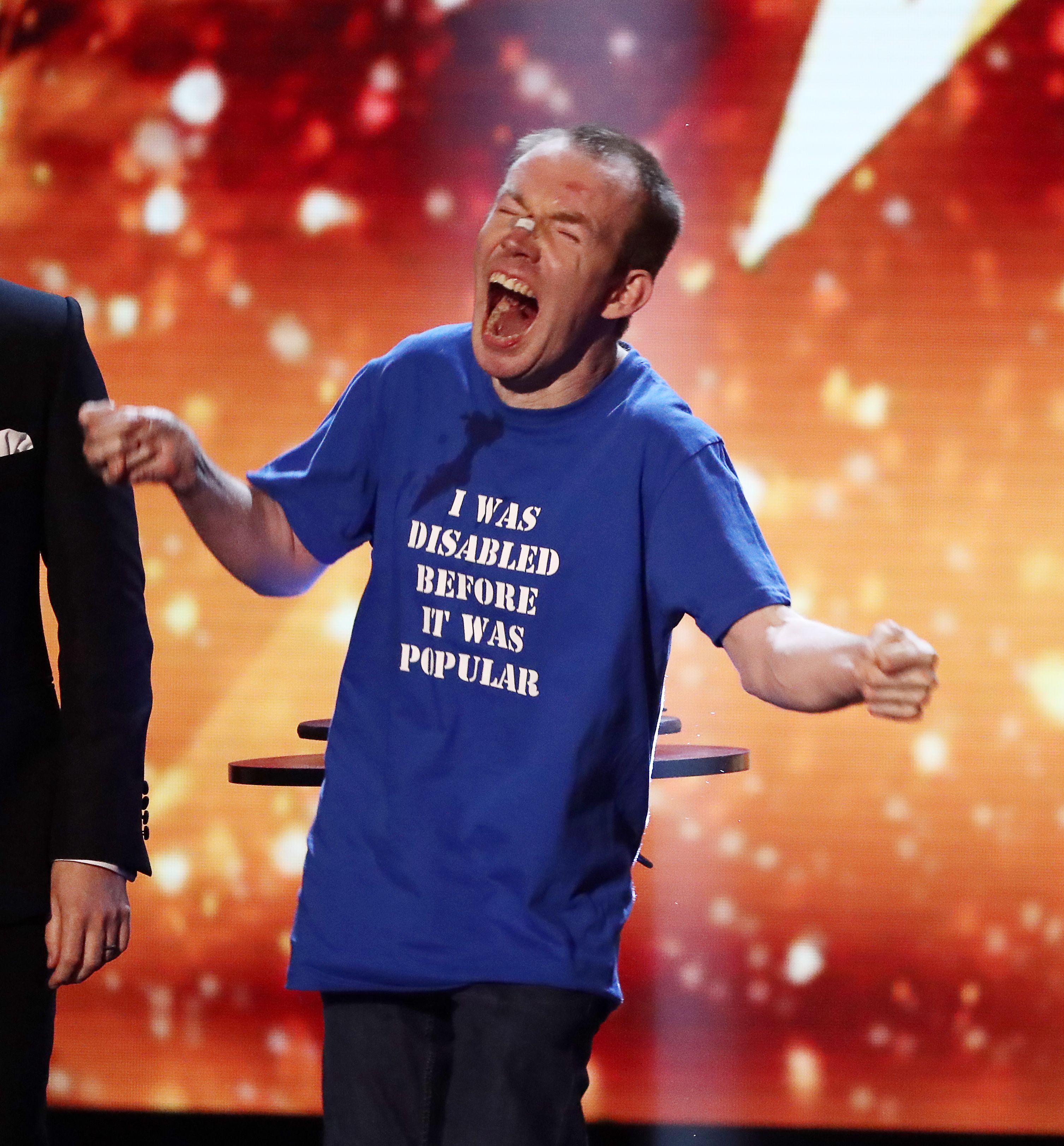 But when he was around two-years-old, his parents David, 62, and Janet, 62, noticed he was developing slower than other children.

He was then struck down by a mystery illness and doctors performed a battery of tests and later diagnosed cerebral palsy.

Ethel said: "At one stage the doctors said they didn't think he would survive but he pulled through and his mum and dad had to nurse him day and night. It was a tough time.

"Growing up was hard. He was always having a tumble and tripped over the least little thing.

"We had to watch him like a hawk in case he hurt himself, just like he did before the BGT final.

"He was always having a tumble but he is as hard as nails.

"And he couldn't talk at all but he was always on computers growing up and he had lots of friends. 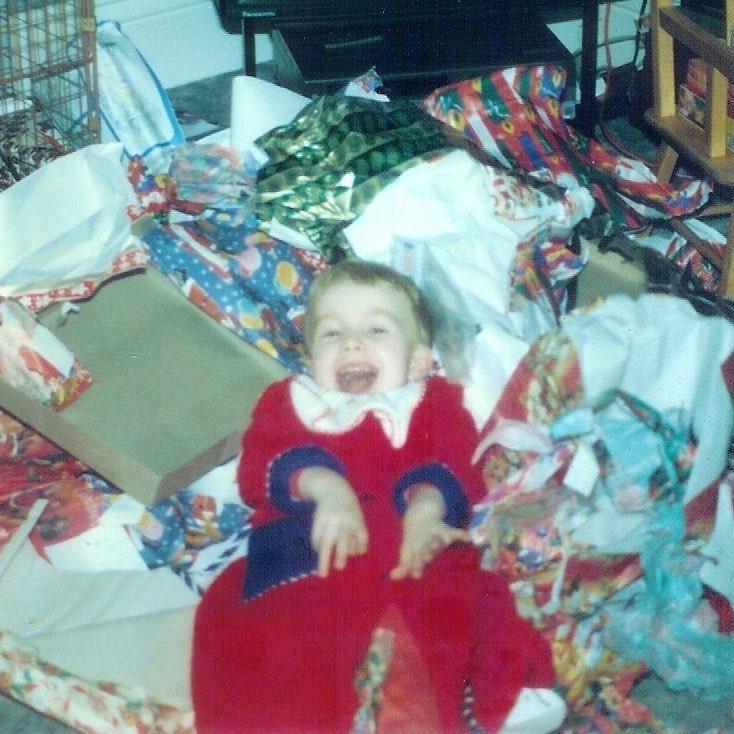 Lee battled to survive as a youngster 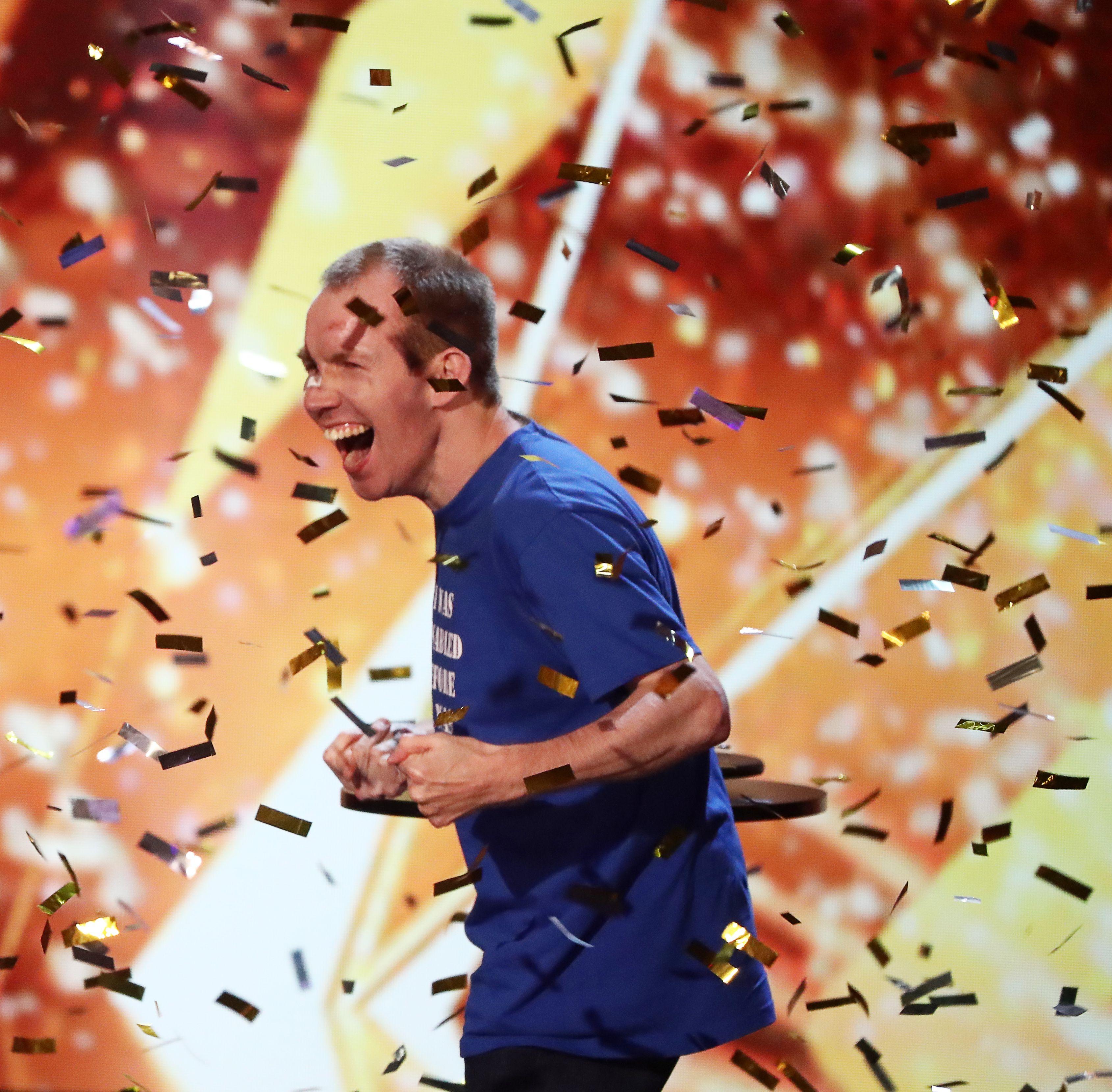 Janet, who also has a daughter Nicola, 33, gave up work as a nurse to care for him full time before returning to her career as Lee got older.

Lee moved out of the family home a few years ago to live on his own in a flat in Newcastle.

He has a carer and his mum, now retired, visits every other day to check on him.

The family are close and David, who worked in sales for Mars before retiring, and Janet were in London with other relatives for the final. 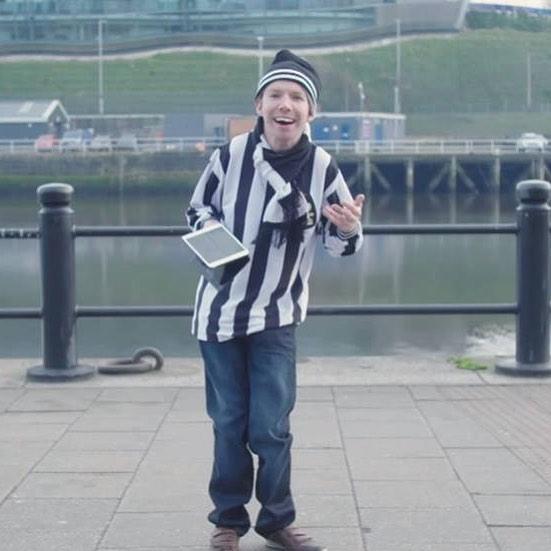 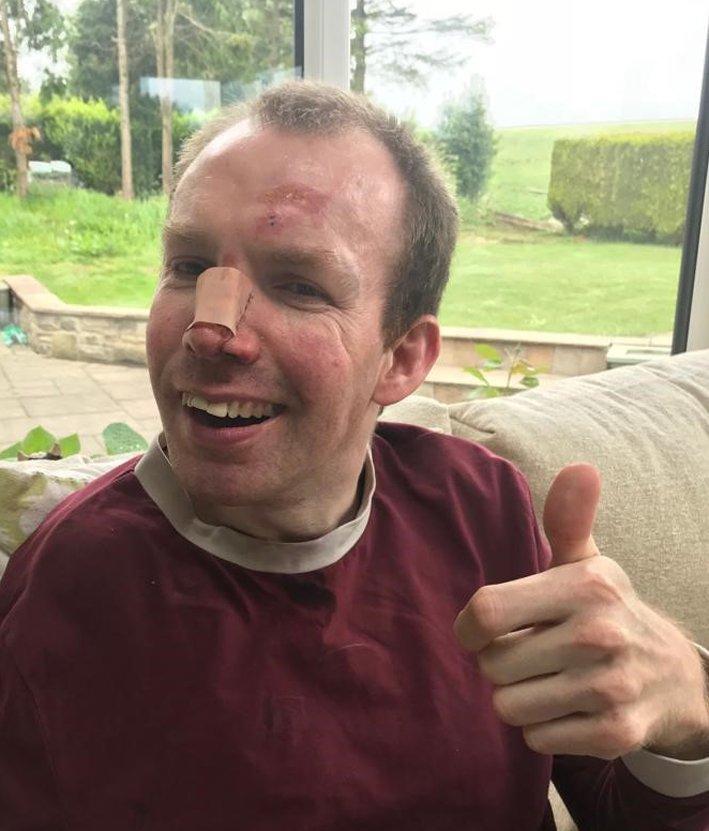 lee had a tumble before the Britain's Got Talent Final

But Ethel didn't make the trip to London to watch him in Sunday's final - because she was too nervous.

Instead she watched it at home with her family - and screamed with delight when the nation voted for him.

Ethel said: "I was confident he would win but I was too nervous to go and watch it. I'm still nervous now.

"I watched it here instead with my son and daughter-in-law and we were screaming and shouting.

"I was really proud of him but I knew he could do it because he has always made people laugh. He has never been able to talk but he has always been funny.

"He used to take all my cushions outside when he was here and jump around on them and he was always laughing himself and that made other people laugh.

"I wasn't sure when he said he was going to give up work and do comedy full time. I was flabbergasted really.

"But I am so proud at what he has achieved. It's because of his attitude to life. He is disabled but he doesn't think he is disabled.

"If he says he is going to do something then he does it. When he first wanted to go on BGT he just said he could do it and that was that. 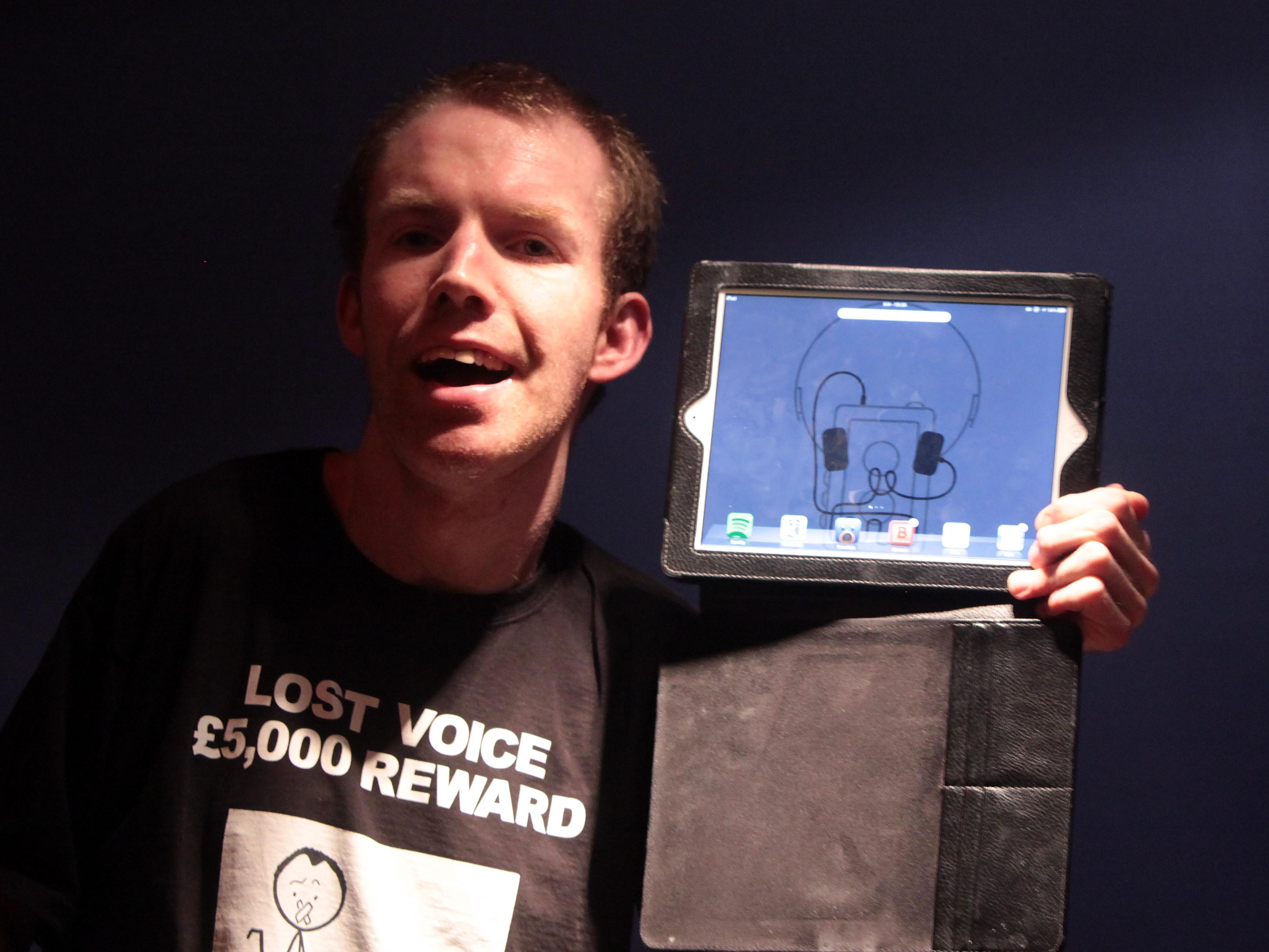 Lee has always been able to make people laugh

"He has had to overcome more than most to get where he and it has been hard for the family.

"But he is a national hero now and that is a lovely thing for the family.

Bayern, Atletico and Everton are Interested in Zaa
Joan Laporta: Messi is the best in history. We must create appropriate conditions for it
Mourinho on Bergwein in reserve: Klopp, Pep and Lampard you ask such questions
Solskjaer on Pogba: he's been great since the restart. When Paul plays like this, you can't help but include him in the lineup
Alisson: the points Record was not Liverpool's goal. We are still Champions
Inter want to extend Sanchez's lease and are willing to pay extra for him to Manchester United if the clubs play in the Europa League final
Don't talk behind our backs, go out on the field and fight with us. Pep's possible appeal to Jose, Klopp and the world
Source https://www.thesun.co.uk/tvandshowbiz/6449067/bgt-winner-lost-voice-guy-died-nan/

Leicester lockdown: Schools and shops to open in but pubs stay closed as city continues to battle outbreak

Man Utd boss Solskjaer motivated Martial by texting him ‘do you want your No9 shirt back?’ after Ibrahimovic left

Burnley firm slammed over ‘illegal practices’ in its supply chain

Coronation Street characters will NOT kiss despite filming guidelines being relaxed

Drive-in cinemas to visit in Lancashire this summer

What did Chris Evans say to Bridger, the 6-year-old boy who saved his sister from a dog attack?

Motorists urged to check insurance for cover against thefts from cars

Coronavirus sees unemployment double in Hull and the East Riding

Chief scientist admits UK’s coronavirus outcome has ‘not been good’

Why were Spirit Airlines passengers arrested for attacking and assaulting staff at Fort Lauderdale airport?

When will people have to go back to their offices and what guidelines will they follow?

The 'loving and caring' Salford grandad who died in motorbike crash

The Nissan Ariya is an EV for a new era

Police, fire and council keeping an eye on Perthshire lochs

Hull City get much-needed boost ahead of Luton Town clash

Coronavirus could delay much-needed Hamilton Mausoleum repairs until next year

York racing tips: John Smith’s Cup trends – we help you find the winner of the York handicap live on ITV

6 of the best burger joints in Islington

Johnson has failed on social care. That's why he is dodging a coronavirus inquiry | Polly Toynbee

6 of the finest brunch spots in Islington

66 more people with coronavirus have died in the UK

Parents' plea for playgrounds to reopen

Man, 42, in hospital after bitten by dog and struck by weapon in savage assault

Mom releases pics son 5, who had his face ripped off by two jealous rottweilers on trip to family friends’ home

The bizarre things divorcing couples have rowed over revealed, from a Henry the Hoover to a doll’s house

Irish Oaks betting preview: Tips, analysis and runners and riders for the fillies’ Classic at the Curragh

Trim-endous return of barbers, pubs and restaurants in Perth and Kinross