Captain Tom became the first member of the Lionhearts, a squad of inspirational heroes assembled by the English Football Association.

Following the outbreak of coronavirus, Captain Moore became a national hero after walking laps of his garden at the age of 99 in aid of NHS Charities Together back in April. He was given a knighthood on May 19.

Now, the national hero has been named the honorary captain of the Lionhearts, an initiative honouring inspirational people who have gone above and beyond during the fight against the Covid-19 pandemic.

Football legend David Beckham visited Sir Tom in his Bedfordshire home to thank him for what he did.

Beckham said: “The highlight of my whole career was being made England captain. 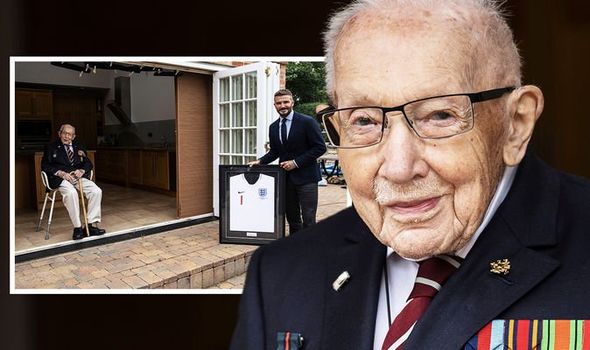 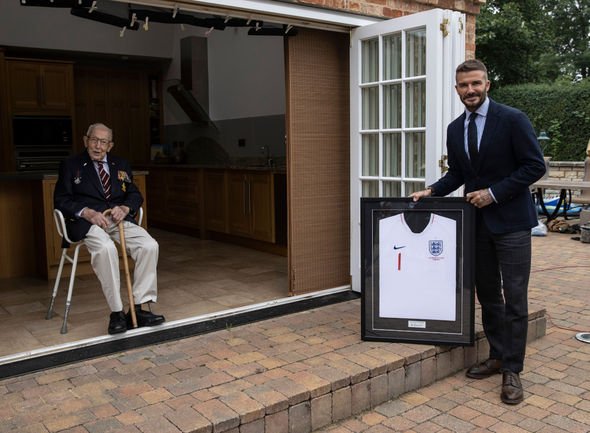 “To have Sir Tom as our captain - it doesn't get any better than that.

“Everyone was aware at some point of this amazing man but I think he went above and beyond any expectations out there."

Speaking about his new honour, the World War 2 veteran said: “It is very kind of you and I am delighted to receive that honour especially from you.

“Thank you very much indeed.” 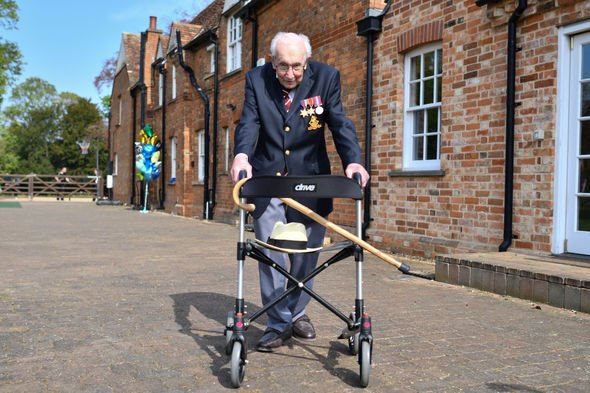 Beckham asked the war veteran what makes a good leader to which Sir Tom replied: “I think you have to rather like people and realise there is good in everyone and as a leader you can bring it out of them.

"It is no good you asking me about a leader when you have been sitting there and you know you have been one of the biggest and finest leaders in football we have ever had."

During his fundraising, Sir Tom made countless media appearances and quickly became a household name in the UK.

He attracted more than 1.5 million individual donations during his charitable cause. 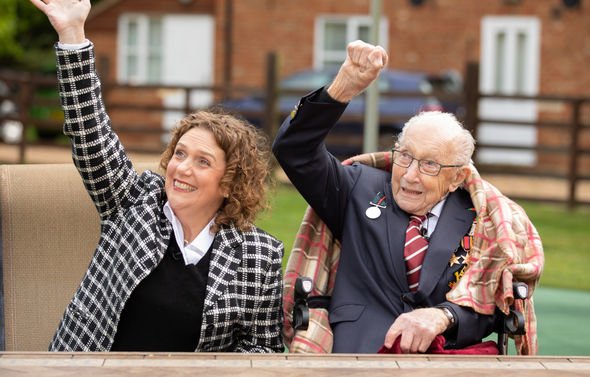 Sir Tom also covered a version of You’ll Never Walk Alone alongside Michael Ball and all the proceeds went to the same charity.

The single topped the UK music chart and he became the oldest person to achieve a UK number one.

His overall total soared more than £32.9 million and his hundredth birthday was marked with flypasts by the Royal Air Force and the British Army.

Sir Tom was also appointed as honorary colonel of the Army Foundation College. 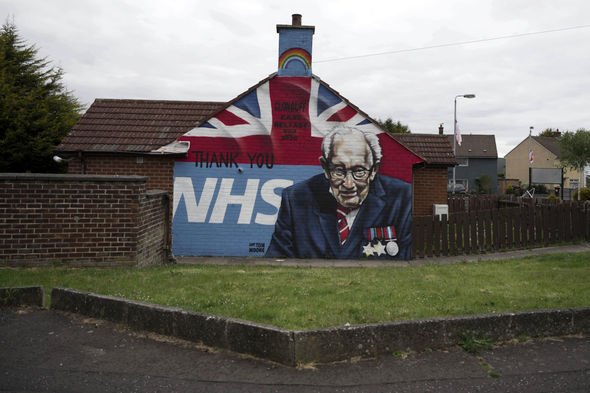 The war veteran was conscripted in the 8th Battalion, Duke of Wellington’s Regiment, in 1940 and was stationed in Cornwall shortly before the beginning of World War 2.

A year later, he became a member of the Royal Armoured Corps.

He was quickly promoted to war-substantive lieutenant in 1942 and then to temporary captain in 1944.

Following the end of the war, he served as an instructor at the Armoured Fighting Vehicle School in Dorset. 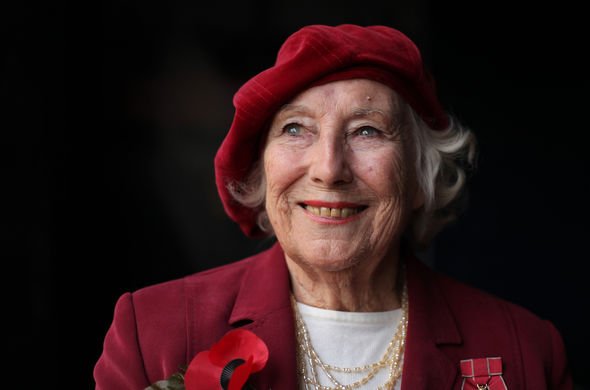 Last month, Sir Tom paid tribute to Dame Vera Lynn, who sadly passed away, and said she made a huge impact on him.

“A real shame, I really thought Vera Lynn would live longer,” he said in a statement shared via Twitter.

“She’s been speaking so well on TV recently.

“She had a huge impact on me in Burma and remained important to me throughout my life.

“My thoughts are with Dame Vera Lynn's family at this sad time.”

Thomas Tuchel: If both legs were intact, you could have seen my 40-meter sprint
PSG saved Tuchel's pet: Choupo-moting got everyone for free, managed not to score from a centimetre, and now pulled Paris to the semi-finals of the Champions League
Gian Piero Gasperini: The worst part is that we were so close. I can only thank the guys
Neymar was the player of the match Atalanta-PSG. He gave an assist
ПС PSG suffered through the entire quarter-final and turned it over in 149 seconds. Lifted the Italian curse and went so far in the Champions League for the first time in 25 years
ПС PSG's pain was transformed into happiness: in three minutes, the suffering stars turned into celebrating kings
The club from Italy won't win the Champions League for the 10th year in a row. This is an anti-record
Source https://www.express.co.uk/news/uk/1308136/captain-tom-Moore-David-Beckham-lionhearts-NHS-fundraising-coronavirus-news?utm_source=feedburner&utm_medium=feed&utm_campaign=Feed%3A+daily-express-news-showbiz+%28Express+%3A%3A+News+%2F+Showbiz+Feed%29

Victoria Beckham shares sweet snap of Harper, nine, posing for a selfie with her cousin on family trip

Here are some of Britain’s best fish and chip shops — is your favourite among them?

Gerbils get the house squeaky clean as they vacuum, pour tea and paint in sweet snaps

The Little Couple’s Jen Arnold takes a break from work to take kids Will, 10, and Zoey, 8, to beach near Florida home

Nicole Scherzinger 42, shows off impressive abs as she dances around boyfriend Thom Evans 35, on holiday

Result of A-level chaos? Pointless grades no one can really trust

Teen left with life-threatening injuries after shots fired in Bury

Trump promises to SCRAP payroll tax if he’s reelected and says it could save families up to $5,000 a year

Teenage boy fighting for his life after being shot near park

RAF airman, 25, dies of head injuries after refusing to come off rugby pitch

Hundreds of arrested Portland protesters will NOT face charges for rioting, trespassing and harassment

Americans may not get $1,200 stimulus checks until September if Congress can’t agree to a deal in the next three days