New infection rate data from the UK's Scientific Advisory Group for Emergencies (SAGE) suggests the outbreak in England may no longer be shrinking. A source said: "If the number overall increases then I would expect us to have to impose some national measures." But scientists urged calm as separate figures on the growth rate of the virus suggested it is still declining and that so far relaxation of lockdown has not caused a second wave.

The R reproduction estimate from SAGE has seen an uptick to between 0.8 and 1, up from between 0.8 and 0.9 the previous week. The upper end of that estimate, 1, would mean on average every person who catches the virus is passing it on to someone else.

The separate measure of "growth rate" released yesterday suggested the outbreak is shrinking less, but still coming down slowly.

Some of this is thought to be down to the warm weather and the fact that people can spend more time outdoors where the virus cannot easily spread. SAGE now believes the virus spreads at an "optimal temperature" of 4ºC and is braced for a fresh winter crisis.

The growth rate estimate of new infections per day for England is now from -4 percent to -1 percent .This changed from between -5 percent to -2 percent.

SAGE said the only region with a robust estimate that suggested its R rate could have reached 1 was the North-west. 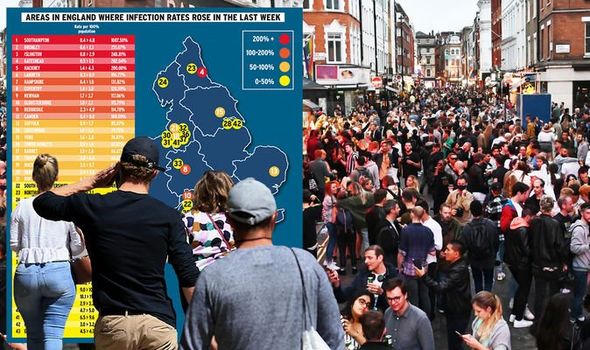 The current rate of transmission for Covid-19 for the country as a whole remains at less than one (Image: Getty Images)

Daily deaths were highest in the North-west, which recorded eight out of the 22 deaths in England yesterday.

The growth data released yesterday revealed it has dropped to between -5 percent and -2 percent per day, compared with a rate of -6 percent to 0 percent per day last week.

Prof James Naismith, Director of the Rosalind Franklin Institute, and University of Oxford, said: "That the number of cases is falling slightly is to be welcomed. This suggests that, so far, relaxation of the lockdown has not precipitated a second wave."

However, there is some regional variation between the figures.

In the East of England, the growth rate rose from between -5 percent to 0 percent last week, to between -4 percent and +1 percent this week, indicating the rate of spread of the disease is growing in that area.

The figures come as beauty salons, outdoor pools and outdoor performances gear up to open within days. In London, the growth rate is between -5 percent and +1 percent, compared with between -4 percent and +2 percent last week.

In the South-west, the growth rate dropped from between -7 percent and +2 percent to between -6 percent  and +1 percent.

And in England, the growth rate is between -4 percent and -1 percent, compared with between -5 percent and minus 2 percent last week.

Meanwhile, the current rate of transmission for Covid-19 for the country as a whole remains at less than one.

Public health chiefs in Cumbria yesterday issued a warning after a "small but concerning rise" in the number of Covid-19 infections in the Carlisle area.

Data released shows there were 18 new cases per 100,000 residents in Carlisle in the week ending July 3, compared with eight new cases the week before. 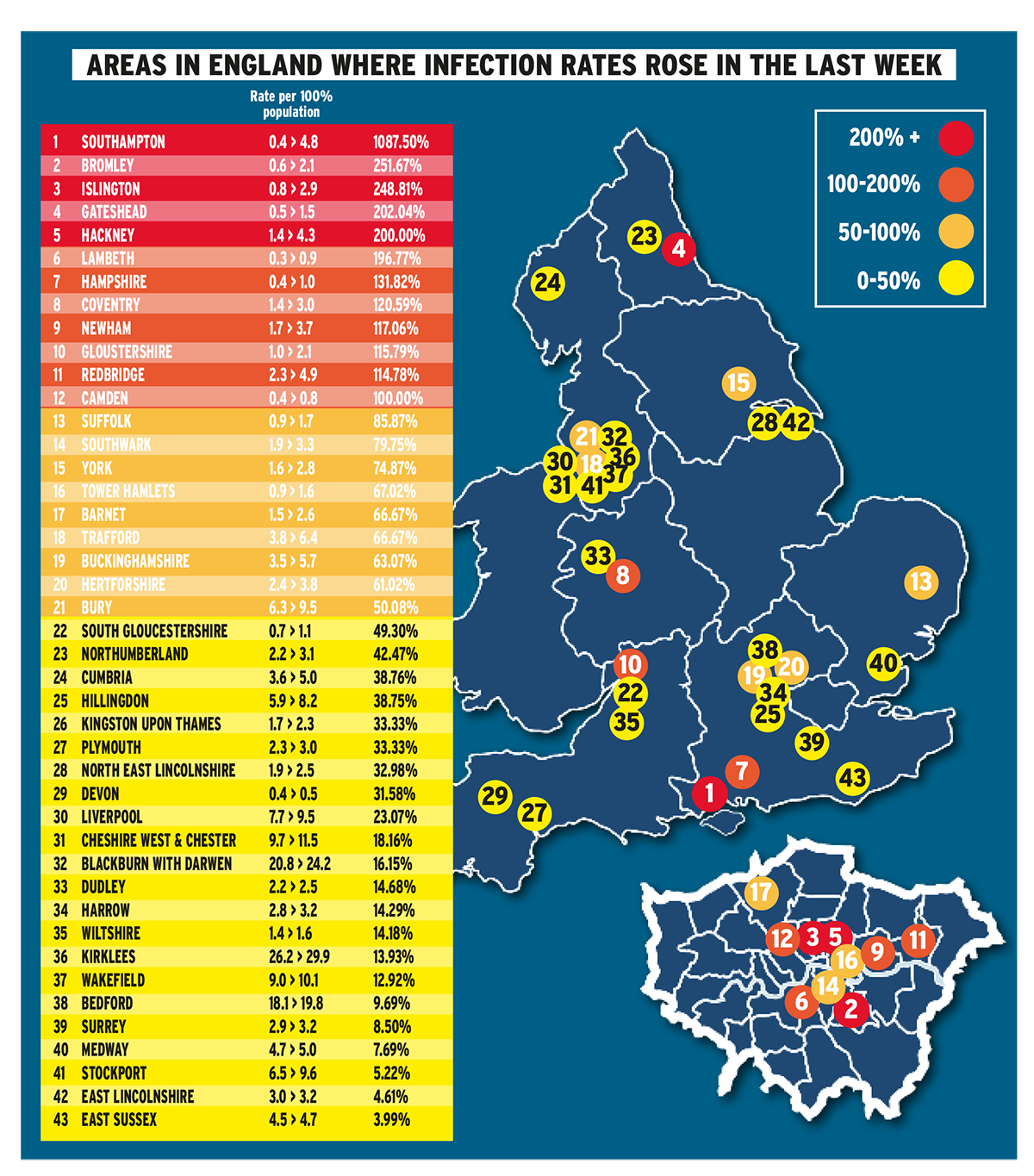 Scientists fear ministers will be slow to reintroduce lockdown fearing criticism they got the strategy wrong.

Prof Naismith said: "Much more important than an individual decision to relax this or that measure will be a willingness to admit error and reverse the decision in the light of new data.

"With new and incomplete understanding, honest mistakes end up being made. Things will end very badly for the UK if the decision to relax or lockdown a specific activity becomes a test of consistency or a contest to see who was 'right all along'. A dose of humility is called for."

Professor Oliver Johnson, of Bristol University, said: "The fact that R is still estimated to be below 1 across the UK implies the epidemic is continuing to shrink overall."

Guillem Balage: Juventus wants to get rid of Ronaldo's salary. It was offered to everyone, including Barcelona
Mbappe thanked the PSG doctors: Don't tell me about the pain
Liverpool presented a turquoise away kit for the 2020/21 season
The President of PSG: Neymar and Mbappe will never go away. They are one of the best players in the world
Thomas Tuchel: If both legs were intact, you could have seen my 40-meter sprint
PSG saved Tuchel's pet: Choupo-moting got everyone for free, managed not to score from a centimetre, and now pulled Paris to the semi-finals of the Champions League
Gian Piero Gasperini: The worst part is that we were so close. I can only thank the guys
Source https://www.express.co.uk/news/uk/1308122/coronavirus-map-uk-update-latest-cases-rise?utm_source=feedburner&utm_medium=feed&utm_campaign=Feed%3A+daily-express-news-showbiz+%28Express+%3A%3A+News+%2F+Showbiz+Feed%29

ADVERTORIAL: How two local roofers built one of the region’s most reliable companies

Gary Lineker to house refugees in his home

50,000 patients in England now waiting over a year for treatment - up from just over 1,000 last year

Plea change to aggravated vehicle taking on day of trial

How you can have your say on the future of Haslingden

Success for largest ever reintroduction of large blue butterfly

A Level results: Teachers’ uproar as 40% of grades pulled down ‘unfairly’

Dagenham 88 Runners get back on track

'No pyro, no party' football fan banned for throwing flare onto pitch

ADVERTORIAL: Meet the working mum of three who has launched a one-stop shop for CBD products

Fears for girl, 13, with leukemia who ran away from home with 17-year-old boyfriend leaving medication behind

Who are Rita Ora’s parents and where is she from?

An outdoor gin cinema is coming to the UK this month

A-level results day: Students share hilarious memes and joke ‘give us three As’ on weirdest results day ever

DreamWorks are offering the chance to win 37 animated Films

Top A* grades at A-level up in Wales

Two out of every five A Level results downgraded

‘Sell a lung’: Rishi Sunak’s guide to riding out the recession

Who is Rita Ora’s mum Vera?

Unless we act now, the UK's workforce could soon become a mirror image of Leicester's situation

ADVERTORIAL: Why new foster carers are needed in Manchester more than ever

Huge scene remains in place after teenager shot in Bury