For her fourth and final Christmas in the White House, first lady Melania Trump chose to play it safe with traditional Christmas decorations, a patriotic theme of “America the Beautiful” and references to faith, love, military families, and first responders — and a cameo by JFK.

The unveiling of the spectacle of numerous trees and twinkling lights follows the release in October of a recording of the first lady complaining “who gives a f*** about Christmas stuff” by her former friend and employee Stephanie Winston Wolkoff.

Ms Trump has been criticised in the past for her design choices when decorating the executive mansion. 2018’s effort included a hall of blood-red trees described as something out of The Handmaid’s Tale or The Shining; and 2017’s display of stark white branches was likened to Stranger Things and described as a "nuclear winter wonderland".

Nevertheless, as with last year’s "Spirit of America" theme, Ms Trump and an army of volunteers put together a less edgy display that runs throughout the executive mansion with nods to Gold Star families and American heroes, the role of women in the nation’s story, and even former first families.

Particular attention is paid to the Kennedys and former Democrat first lady Jackie’s role in establishing the “People’s House”. Ms Trump has previously said she is inspired by Ms Kennedy’s time as first lady. President John F Kennedy’s official portrait even appears on the Christmas trees in the Vermeil Room, according to a statement from the White House. 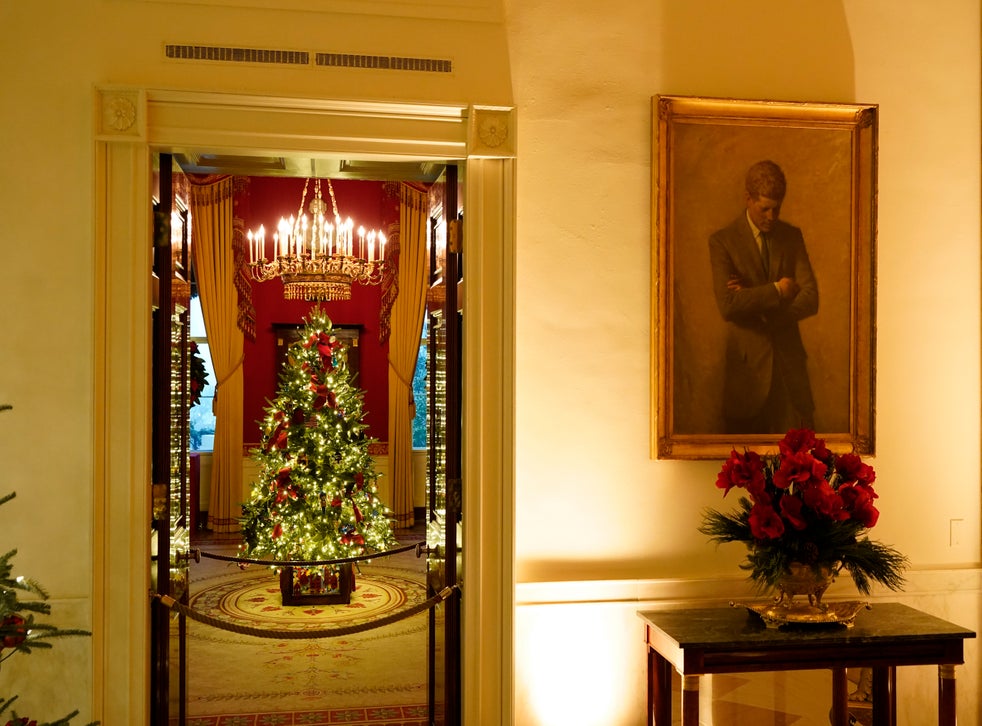 Women are recognised through the 100th anniversary of women winning the right to vote. Decor in the White House Library commemorates the achievements of American women, and the base of the tabletop tree is surrounded by children’s artwork celebrating the anniversary of the ratification of the 19th Amendment — part of a competition launched by the first lady earlier in the year.

The first family’s stockings hang on the fireplace in the China Room, themed on “the joy that home can bring”. In the Green Room American wildlife is celebrated, and in the Red Room America’s everyday heroes who serve as first responders and frontline workers are commemorated by handmade ornaments.

The East Room celebrities American transportation as a nation that has always been on the move, with planes, trains, automobiles adorning the trees — including an ornament decorated with the logo of Space Force, founded by Donald Trump.

In the State Dining Room sits the traditional 275lb gingerbread White House, this year including not just the mansion, east and west wings, but also the First Ladies’ Garden and the Rose Garden, designed by Jackie Kennedy and controversially made over by Ms Trump earlier in the year.

Finally, the official White House Christmas tree stands eighteen feet tall in the Blue Room and is decorated with ornaments made by children to depict their state, and is themed on the first lady’s “Be Best” initiative.

Ms Winston Wolkoff played the recordings of Ms Trump’s comments about her previous Christmas decorating efforts during an interview to promote her book, Melania & Me — which the first lady dismissed as “idle gossip”.

Ms Trump’s comments were made as she began planning the White House Christmas decorations during the scandal over the president’s policy of splitting migrant families up at the border and detaining children.

The first lady complained about being seen as complicit for not speaking out against her husband’s policies, and that Michelle Obama had not received any similar criticism.

Real Madrid are confident that PSG will demand 150 million euros for Mbappe. Madrid is not ready to pay so much
Arteta on Ozil: It is always sad when such a figure leaves
Alabai will move to Real Madrid in the summer. The contract for 4 years is agreed, the salary is about 11 million euros (Marca)
Stefano Pioli: We will look at the table in April. For Milan, every match is the most important
Zlatan Ibrahimovic: Together with Mandzukic, we will scare the opponents of Milan. He signed a contract
Milan scored 43 points in 18 rounds - the best result since the 2003-04 season. Then the club became the champion
Aubameyang scored a double in a Premier League match for the first time in the season. Parti's first assist for Arsenal
Source https://www.independent.co.uk/news/world/americas/melania-trump-christmas-decorations-white-house-b1764024.html