Gartcairn boss Willie Kinniburgh fears the lower league suspension could be the final nail in the coffin of a nightmare season.

The uncertainty of Covid and a lack of promotion in the West of Scotland League Conferences this season has seen a host of star players leave the club over the last few months.

A season that started with much excitement and high hopes has all but evaporated with ex-Partick Thistle striker Gary Harkins never kicking a ball in a competitive game, Steven Saunders heading to Lowland League East Kilbride and, most recently, key striker Martin Grehan quitting to join his old club BSC Glasgow, also in the Lowland League. It’s been a huge blow to the Airdrie outfit and although he understands why their big signings have moved on, the latest setback for the club could see the season end.

Kinniburgh, whose side are eighth in Conference B, said: “We were just in the process of trying to revamp a squad that we had built and then lost, and it looks like we’re losing them again, so it has been an eventful season.

“I spoke to Martin. We’re non-competitive and he wasn’t sure whether he would carry on next year, and was just looking to possibly finish his career off in a competitive league, which I understand, so I had no issues.

“We weren’t offering him anything other than a game on a Saturday which ultimately didn’t mean an awful lot, other than it being like a private league between the teams that were in it, so it was fair enough.

“It was the same with Steven Saunders and the rest of them that are all away.

“It’s a bit frustrating, but we’ve got to deal with it.

“Had it been a competitive league we wouldn’t have lost the four or five players that we did, so you just roll with the punches, get on with it, and then hopefully gather a decent squad again for next year.” Kinniburgh understands why the SFA imposed the suspension of football, and just hopes it doesn’t get worse.

While surprised that their setup came under the ‘professional’ bracket, Kinniburgh fears the final whistle could have blown on the campaign.

He said: “When things get worse you’ve got to look at people’s health and consider things like that.

“That comes first, and if they’re mingling with players during the day on a Saturday and a couple of nights training, then going into their work and doing the same it becomes a problem – and they’ve got their families to think about. 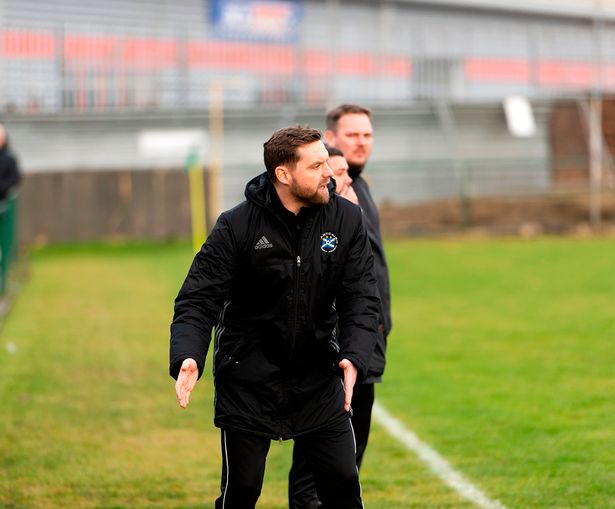 Willie Kinniburgh is at the helm at Gartcairn (Image: David Rankin)

“The fear is that they might end up scrapping everything and we wouldn’t want that, but health comes first and you want everything to be back sooner rather than later.

“There had been whispers about it happening for a while now, with the way things were going with Covid, so I wasn’t surprised.

“I was surprised that we fell under the bracket of ‘professional’ in the first place, though.”

Kinniburgh has also seen players fail to hit the heights with nothing to play for.

He added: “It has been a tough year but it has been tough for everybody and sometimes football is a wee bit of an escape, when you’re playing.

“I can certainly see with some of the players in our squad that the edge isn’t quite there, because you’re not playing for promotion, and I think we’ve suffered quite badly for it. “I suppose it is hard to gee yourself up, be there fully and give 100 per cent when you’ve been looking forward to something and then it’s not quite what you’re going to be playing for.

“As much as you think you might be doing it, your body has already given up the ghost.

“It’s disappointing in that sense, but it’s up to us to get it right for next season, go forward and have a team that’s going to compete at the top end.”

Meghan Markle says there were concerns over colour of Archie's skin

Meghan Markle and Prince Harry announce they are having a girl

Meghan Markle and Prince Harry having baby girl in the summer

Meghan Markle says Queen Elizabeth was ‘always wonderful’: ‘I just really loved being in her company’

‘They wanted hero and villain’: Meghan says Kate made her cry and Palace covered it up

Where was Meghan and Harry’s Oprah interview filmed?

Prince Andrew 'could be dragged into bullying row' after Meghan claims

Meghan says it was Kate who made her cry over flower girls, not other way round

Horoscope today, Monday March 8: Daily guide to what your star sign has in store for your zodiac dates

When is Meghan Markle and Prince Harry’s second child due?

Attacks on women, minorities and Muslims under the cover of Covid

Equality must be the priority as we tackle the pandemic

The impacts of crises are rarely gender-neutral

Where do Harry and Meghan Markle live?

Why isn’t Archie a Prince?

‘We should be ashamed’: How people are reacting to Meghan and Harry’s interview with Oprah

Where do Harry and Meghan live in California?

Why are Mumford and Sons trending?

Royal experts give their verdict on Meghan and Harry's Oprah interview

It is the responsibility of the whole country, not just schools, to make sure no child is left behind

Mel Marshall: 'With equality and diversity, spectacular things can be achieved'

Face masks safe to use during intense exercise, research suggests