The 50-year-old is set to talk about his personal struggles after little Maddie vanished without a trace during a holiday in Portugal 11 years ago.

On the BBC Radio 4 special, he will speak about coping with grief and his loss in a bid to help other men open up about their emotions.

He said: “I decided it was a good opportunity to say something about the special bond between fathers and daughters, thinking that speaking openly might help other men in similar positions. It feels like the right time.”

The family were devastated after the then three-year-old vanished from their Algarve flat while they were dining with friends nearby.

Despite searches yielding few fresh leads the McCanns still hold out hope their daughter could still be alive.

But time is running out for cops, who will have search funding cut at the end of the month – one day after the show Pear: Two Fathers, Two Daughters airs.

The programme will feature a poem translated and dramatised by Simon Ermitage and Game of Thrones star Iain Glen, respectively.

‘Pearl’, is a medieval poem that focuses on a dad who lost his young daughter. 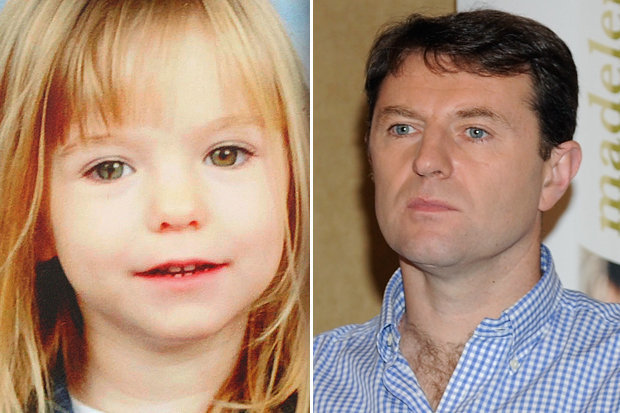 CANDID: Gerry McCann will open up about his emotional struggles (Pic: GETTY)

Mr McCann said: “As a family we’d worked with Simon Ermitage before and know what a sensitive, thoughtful writer he is.

“When I read the Peal poem, I could see echoes in it with Madeline’s situation and our loss.”

INVESTIGATION: There are still few leads that could reveal what happened to Maddie (Pic: GETTY)

Zidane on La Liga: there are six finals Left. We are fine, but it doesn't mean anything
The drunk at the party in honor of the transition to Barca was crying with happiness on his father's shoulder
Christophe Dugarry: Messi really could have given Griezmann more passes. Antoine lost confidence
Sane passed a medical for Bayern and went to meet with the club's management
Neuer - in goal, Hakimi and Davies burn out the flanks, in front-Sancho, Muller and Lewandowski. Collected Dreamtime Bundesliga-19/20
Casillas is almost not on the video in honor of Spain's victory at Euro 2012. Perhaps this is due to his promotion to the post of President of the FFI
Setien's future in Barca is under threat. The players don't support it
Source https://www.dailystar.co.uk/news/latest-news/730117/madeleine-mccann-mystery-missing-child-portugal-uk-latest-news?utm_source=feedburner&utm_medium=feed&utm_campaign=Feed%3A+daily-star-latest-news+%28Daily+Star+%3A%3A+News+Feed%29

Tesco, Asda, Co-op and Sainsbury's urgent recall on pork, cheese, pies and more - do not eat

Scotland blamed for delay in foreign holiday plan for Brits

Exclusive: What Angel Gomes is planning after Manchester United departure

Opinion: Government must commit to helping us keep people housed

Students are throwing ‘coronavirus parties’ to see who gets infected first

All the major school rule changes for September confirmed for England

Schools guidance: What are the rules for when schools reopen? What is a school bubble?

Martin and Gary Kemp: 'Most brothers in music seem to hate each other'

ADVERTORIAL: Call New Islington home with one of these amazing city properties

ADVERTORIAL: School decides not to bring children back to the classroom until September

School coronavirus outbreak: What happens if your child's school has confirmed case?

McDonald's fans say 2020 is ruined as Monopoly is cancelled

Bake strawberry shortcake for the Fourth of July

All the important changes to driving lessons from July 4

Brexit POLL: After Merkel's no deal warning, should UK call EU's bluff and walk away? VOTE

'The timing must be right' - Bayern chief makes Klopp admission

UK must ‘prepare for the worst’ over winter return of coronavirus

Bin lorries to be fitted with CCTV