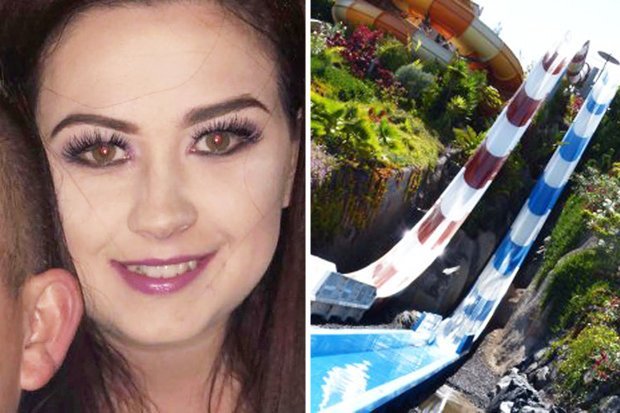 Toni Steedman, 25, was at the Aqualand water park in Costa Adeje, Tenerife, when she suffered horror injuries.

She was left with a 7cm tear to her uterus and lost nearly six pints of blood.

The Kamikaze slide was only the second ride she had been on at the park before she suffered the injury.

Mum-of-two Toni, from Clackmannan, Scotland, had planned the trip with her husband Adam, 32, to celebrate his birthday.

She nearly died after being rushed to hospital and says she needed three blood transfusions before doctors brought over a defibrillator.

HORRIFIC: She suffered a rip in her uterus and lost 6 pints of blood (Pic: FACEBOOK)

"The slide had a free-fall drop and the lifeguards at the top never told me to fold my arms or cross my legs," Toni told the Sun Online.

She went on: "The slide was really fast and when I hit the water at the bottom I felt something just burst inside me.

"When I stood up I felt as though I needed the toilet but as I moved blood started pouring from between my legs. It was making a trail as I walked from the pool."

Toni said a doctor was fetched who examined her and realised what had happened.

She was put into an ambulance and rushed to a nearby hospital, before being taken to a major hospital in North Tenerife where she was given an epidural to perform the surgery.

Toni said at one stage she believed she was going to die, and told Adam to look after their kids.

The couple had flown to Las Americas - popular with Brit tourists - on May 15, 2017, and bought the water park trip through a tour guide for the following day.

It is the latest accident to happen at a Spanish waterpark to make the news.

On Tuesday, British holidaymaker David Briffaut, 23, snapped his neck while sliding head-first down a ride at Aqualandia in Benidorm.

Doctors have warned the talented golfer could lose the use of his legs or all feeling below his chest and will need an operation when he is stable.

A visitor to the same park, Joe Pollard, claimed he lost most of his face after going down the same ride face-first.

This is the best Milan in years: superkambekom with Juve (3 goals in 5 minutes!) saved the intrigue in Serie A
Zlatan Ibrahimovic: I am the President, player and coach! If I had been in Milan since the start of the season, we would have taken the scudetto
Sarri on the defeat by Milan: we played first-class football for 60 minutes. Then-turbidity
Pioli on the victory over Juve: Milan became a team. We can play even better
Pioli beat Juventus for the first time as a coach
Vardy has scored 10 goals for Arsenal in Premier League matches. Only Rooney has more
Ronaldo scores or gives an assist in 17 consecutive Serie A matches, where he scored 25 (21+4) points
Source https://www.dailystar.co.uk/news/latest-news/793020/tenerife-water-slide-accident-british-mum-ripped-uterus-holiday-spain-canary-islands?utm_source=feedburner&utm_medium=feed&utm_campaign=Feed%3A+daily-star-latest-news+%28Daily+Star+%3A%3A+News+Feed%29

The great reopening – how Britain's galleries Covid-proofed themselves

Manchester United have alternative line-up to field vs Aston Villa

Man City players know what they must rediscover against Newcastle

Boy, 15, whose dad was shot in ambush attack in the wild escaped gunman & survived alone in forest for 30 hours

Firebrand Handley still up for the fight

Willington man loses licence for driving whilst over the limit

Lake District's most popular attraction is reopening this weekend

Council release touching message 25 years on from the Srebrenica genocide

Grasmere not miss out on traditional event thanks to online plans

Councillor claims that Keighley is a 'dying town' are criticised

Redcar MP: Government must move quickly on hydrogen or risk being left behind

Call for fence to protect football club from anti-social behaviour

Coronavirus: businesses need to avoid the risk of overtrading

Support in County Durham for workers affected by coronavirus

REVIEW: Lunch at Wetherspoon's The Cooper Rose in Sunderland