INSTAGRAM star Ramon Olorunwa Abbas, who went by the name Hushpuppi, was "kidnapped" by the FBI to face a US money laundering trial, according to a claim from his lawyer.

Abbas, a 37-year-old Instagram influencer who often shared photos of an extremely lavish lifestyle, was arrested in the United Arab Emirates last month for allegedly conspiring to launder hundreds of millions of dollars in some sort of cyber scam.

His arrest came after a lengthy FBI investigation, according to reports.

Abbas' lawyer is now claiming that he is innocent, and that he was "kidnapped" from Dubai by the FBI, according to The BBC.

"In my opinion, the FBI and the government here acted illegally when they kidnapped him from Dubai without any legal process to do so," Abbas' lawyer Gal Pissetzky said.

"There was no extradition, there were no legal steps taken, there were no court documents filed, it was simply a call to the FBI. He is not a citizen of the United States, the US had absolutely no authority to take him," Pissetzky added.

Abbas is accused of leading a transnational network of cybercriminals who have targeted a US law firm, a foreign bank and an English Premier League football club, according to the BBC.

The influencer was allegedly involved in email scams, which attempted to steal personal information from people or trick them into sending money into the wrong account. 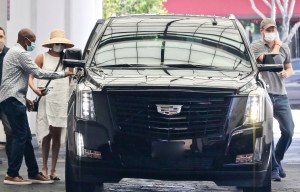 In court documents, the US Department of Justice alleged: "Abbas maintains social media accounts that frequently showed him in designer clothes, wearing expensive watches and posing in or with luxury cars and charter jets.

"The FBI's investigation has revealed that Abbas finances this opulent lifestyle through crime."

However, Pissetzky claims that his client earned his money by monetizing on his large social media presence. His Hushpuppi Instagram account does have 2.5million followers.

The lawyer reportedly refused to tell the BBC how he was being paid for his legal services or the source of Abbas' income.

Robbie Williams came up with a form for the club from England's underground. To drive for Port Vale, he gave his song to FIFA 2000 for free
Setien about the match with Bayern: the Game will be equal. Barca has something to say
Olmo scored for Atletico. This is his 1st goal for Leipzig in the Champions League
Xavi: Messi needs Barcelona and Barca needs Leo. If he is happy, the club will win more trophies
Ex-referee Andujar Oliver on Saul's fall: there Was a light touch of the goalkeeper, but it was not a penalty
Alfonso Davies: As a child, I adored Messi, and now I will defend against him
Mesut Ozil: you get Disappointed when you know how good you are, but they don't let you out
Source https://www.thesun.co.uk/news/12114431/instagram-star-hushpuppi-kidnapped-by-fbi/

What is Trump’s proposed law on showerhead pressure after saying his hair has to be ‘perfect’?

Shock moment woman ‘calls black man the n-word, accuses him of stealing and calls cops’ after he parked in her spot

An eclectic selection from Paul Oakenfold, including music from The Beatles, David Guetta and Dean Martin

Apple removes Fortnite from App Store due to payment dispute

Roman Kemp moves on after heartbreaking split as he joins Bumble

Hearts 'incensed' by training ban as they slam governing body

Oil demand to fall further than expected this year after spike in Covid cases, says report

Maya Harris: Who is Kamala's younger sister and why do people call her the next 'Bobby Kennedy'