The dad-of-two, 41, paid tribute to his youngest son tonight by sharing black and white profiles of him on Instagram.

Freddie, 15, looked remarkably like his parents in the pics and it wasn't lost on Jeff's followers.

He captioned the upload: "The baby of the bunch is the one we sometimes all aspire to be more like ❤️."

Singing his praises, one fan commented: "You have done an amazing job bringing your boys up Jade would be very proud, he is Jades double on these pics x."

Another said: "Jeff he is your double, very handsome young man with a fantastic father."

While a third wrote: "Oh my goodness jade would be beaming 👌👌👌👌."

And another told him: "You have done an amazing job bringing your boys up Jade would be very proud, he is Jades double on these pics x." 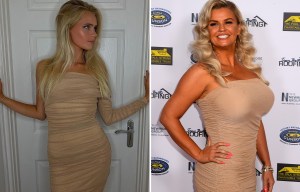 Kerry Katona's daughter Lilly, 17, wows fans with her likeness to her mum, 39

Last month Jeff revealed a touching tribute to Jade in Freddie's bedroom ten years after she passed away.

The TV star showed off the redecorated room which included a photo of the late Big Brother star snuggling up to her boys at Christmas.

Jeff shared his two sons Bobby, 17, and Freddie with Jade.

Despite the fact the pair split up quite early in their relationship and weren't together when she died, he has always made sure she has a big presence still in their life

The couple broke up in 2004, the year that Freddie was born.

Jade then tragically died from cervical cancer in 2009 when the kids were still very young.

Jeff has opened up about his sons struggling to deal with her death, revealing they had “monthly discussions” about Jade before the boys shied away from speaking about what happened.

Since her tragic death, Jade's sons Bobby and Freddie now live away from the public spotlight with their Jeff, who married his partner Kate Dwyer.

The two boys served as best men for their dad, and Jeff says he still takes his sons every year at Christmas to visit their mum's grave.

Barcelona and Bayern have won the Champions League 10 times. 6 other participants of the 1/4 final of 0 cups
Gennaro Gattuso: Napoli fell asleep for half an hour and gave Barca victory. We dominated and hit more often
Lewandowski finished off Chelsea: 2 goals and 2 assists. His statistics this season are more than space
Barca flick: Not focusing on Messi. We want to show our strengths
Lewandowski scored 7 (3+4) points in two games with Chelsea and participated in all of Bayern's goals
Messi has been scoring in the Champions League for 16 years. More only have Raul-17
Luis Suarez: the main Thing is that Barcelona goes further. Bayern are one of the candidates to win the Champions League, just like other teams
Source https://www.thesun.co.uk/tvandshowbiz/12034313/jeff-brazier-son-freddie-jade-goody-beaming/

What next for Beijing? Official demands US follow Australia's actions against China

Will the battery-powered Honda e deliver the ‘likes’ and OMG factor it needs to woo tech-savvy Gen-Z drivers?

UK 'heading back into lockdown next month' - ex chief scientist

Boy,6, swept out to sea on inflatable swan rescued by hero granddad