The foreign secretary was speaking just before chairing a meeting of the government's emergency Cobra committee.

Earlier Iran seized control of Stena Impero, a Brit-flagged tanker, which was carrying 23 crew but no British nationals.

A second Liberian-flagged but Brit-operated tanker, Mesdar, was raided by Iranian guards but released to continue its voyage.

And last night Mr Hunt has warned there would be "serious consequences" if the situation is not resolved quickly.

He told Sky News: "We will respond in a way that is considered but robust and we are absolutely clear that if this situation is not resolved quickly there will be serious consequences." 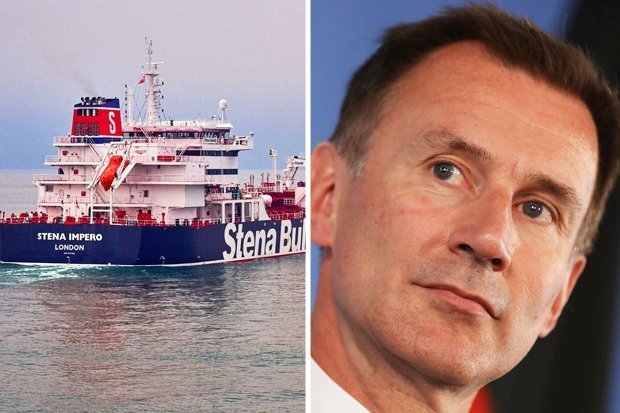 Asked if he could rule out military intervention, Mr Hunt said: "We're not looking at military options - we're looking at a diplomatic way to resolve the situation - but we are very clear that it must be resolved.

Mr Hunt said the Stena Impero was surrounded by four vessels and a helicopter and is heading into Iranian waters.

The second ship - the Mesdar - was surrounded by 10 speedboats, Mr Hunt told Sky, though said it was "not clear yet" whether it had changed course.

He said he had spoken to US secretary of state Mike Pompeo this evening about the situation and had tried to speak to Iranian foreign minister Mohammad Javad Zarif but he is on a plane.

A leader British shipping magnate has warned this morning that the ongoing crisis of Iran could have huge impacts on oil and gas prices.

Bob Sanguinetti from the UK Chamber of Shipping told the BBC there "is no alternative route in and out of the Gulf," for the precious raw materials.

Around a fifth of global oil and a third of the world's gas supply passes through the Strait of Hormuz.

He went on: "If this is to endure then clearly it's going to impact on trade routes, trade patterns and ultimately the price of those goods going through the Strait because they are going to have to be sourced from elsewhere."

Donald Trump yesterday said Iran is “nothing but trouble" and the latest incident "goes to show you I was right about Iran".

He continued: "We will talk to the UK and we have no written agreement but we have an agreement. They've been a very great ally of ours.

"They will have a new prime minister soon, which is a good thing, and we will be working with the UK - but we have no written agreement, but I think we have an agreement which is longstanding."

Sheffield will finish the Premier League season without defeats from clubs from London. 22 points in 10 games and 5 home wins
Bonucci on Juve's draw with Atalanta: We must look at the result. This is how Championships are won
Sterling surpassed Yaya Toure to become Manchester City's 2nd goalscorer in the history of the Premier League
Gasperini on two penalties for Juve: They are above any rules in Italy. Did we have to cut off our hands?
Sarri Pro 2:2 with Atalanta: We played with one of the best teams in Europe right now
Pep Guardiola: Manchester City have won a place in the Champions League on the pitch. I hope that UEFA will allow us to play
Atalanta extended their unbeaten streak to 14 games and is ranked 3rd in Serie A
Source https://www.dailystar.co.uk/news/latest-news/793014/iran-oil-tanker-seized-jeremy-hunt-britain-strait-of-hormuz?utm_source=feedburner&utm_medium=feed&utm_campaign=Feed%3A+daily-star-latest-news+%28Daily+Star+%3A%3A+News+Feed%29