Lil Wayne fans are reacting to the photo the rapper shared seemingly showing his support for Donald Trump.

The photo in question shows the 38-year-old – real name Dwayne Michael Carter Jr – posing alongside the president with his thumbs up. The pair had met to discuss his plan for investing $500m in the African-American community should he win the forthcoming election.

He posted the photo on Twitter alongside a post reading: “Besides what he’s done so far with criminal reform, the Platinum Plan is going to give the community real ownership.”

“He listened to what we had to say today and assured he will and can get it done.”

His photo was met with consternation from some of his fans as well as other celebrities, including Community star Yvette Nicole Brown.

Brown, who played Shirley Bennett in the sitcom, suggested the rapper was supporting Trump in opposition to reports of Joe Biden’s plan to raise taxes. 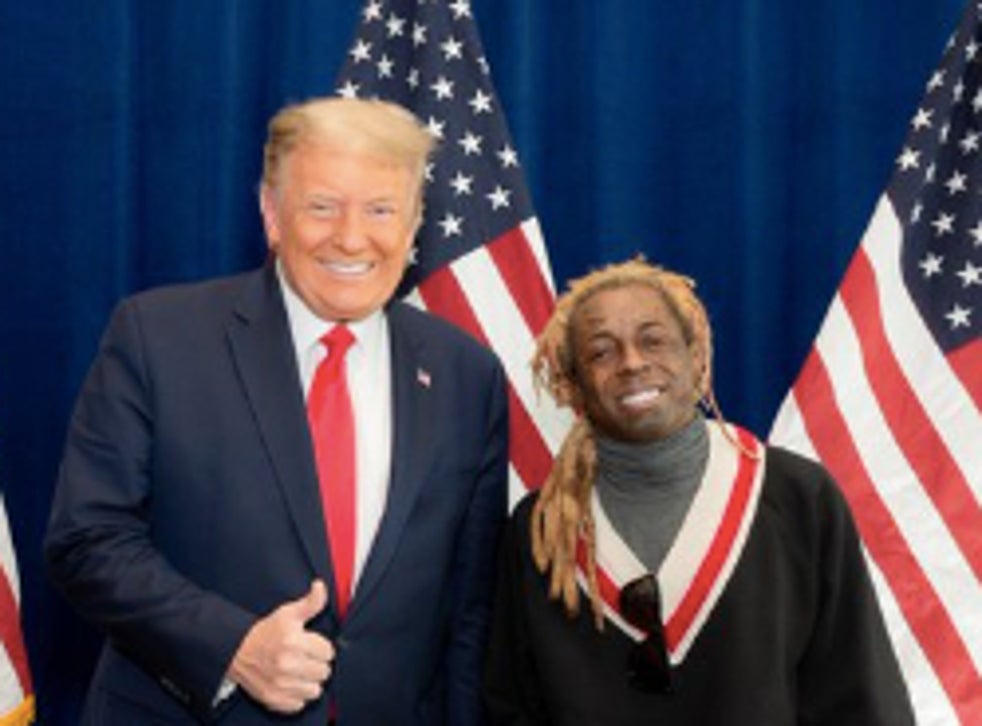 “I am so glad I love people more than my bank balance,” she wrote, adding: “There’s nothing a white supremacist could offer me that is worth my people or the lives of any other group of people in this country who are suffering.”

Another tweeter wrote: “Did you ask him why he decided to meet w/ you less than a week before Election Day? When are some of y’all gonna learn?”

“You’re not a high priority if someone takes a meeting with you five days prior to an election.”

Lil Wayne isn't the only rapper to have discussed a proposed Platinum Plan with the president. According to the Trump campaign, this four-year programme will help create three million new jobs for African-Americans.

After receiving many messages of concern from his followers – including actor Don Cheadle – Ice Cube clarified his position on social media, stating that he was “contacted” by “both parties” due to his initiative.

Ice Cube, real name O’Shea Jackson, formed the programme in August with the intention of “striking at the heart of racism and [presenting] a blueprint to achieve racial economic justice.”

He endorsed neither Trump nor his democratic rival, stating: “Every side is the Darkside for us here in America. They’re all the same until something changes for us.”

“They all lie and they all cheat but we can’t afford not to negotiate with whoever is in power or our condition in this country will never change. Our justice is bipartisan.”

Zlatan is named player of the year in Sweden for the 12th time
Ronaldo scored the 70th goal in home matches of the Champions League, repeating the record of Messi
Brunu on the penalty given to rashford: it was important for Him to gain confidence. It doesn't matter who kicks if the team scores
De Ligt on 2:1 with Ferencvaros: Juventus needed to move the ball faster and act more assertively
The minges on debut for Barca: Very happy. I hope this is the beginning of something big and meaningful
You can ask in the locker room if you have the guts. Tuchel-journalist asked about the quality of the PSG game
Morata on 2:1 with Ferencvaros: it Seemed like a match 20 years ago. They played defensive football
Source https://www.independent.co.uk/arts-entertainment/music/news/lil-wayne-trump-photo-twitter-community-yvette-nicole-brown-us-election-joe-biden-b1445522.html

A new advice line is offering help to carers

Who is Natalia Dyer and how old is the Stranger Things and Yes, God, Yes star?

How many fans will YOUR club be allowed? Chelsea, Arsenal ‘to play with 2000 crowd but Man Utd behind closed doors’

Christmas bubble rules: 3 households will be able to meet for 5 days – but not in the pub

Asia Today: India reports over 44,000 cases, most in Delhi

More than 450 injuries at work reported in Bradford

Trump's coup failed – but US democracy has been given a scare

Deal or No Deal? Castore have a lot of convincing to do if they land Newcastle kit deal

Concentration camp guard, 94, who lived in Tennessee for 60 years will be deported to Germany after losing appeal

The world is still a dangerous place for women and girls

The sexualisation of male violence: A lethal game for women

Afghanistan – where almost every woman has been a victim of abuse

Biden does not rule out his Justice Department investigating Trump

Monster 16ft crocodile goes face to face with a deadly bull shark in Australian river – can you guess who blinks first?

Sunak vows jobs will be ‘number one priority’ in Spending Review

Expert claims to have answer to mysterious desert monolith

10 things you need for matchday at home