The sleeveless dress, white with a thin belt around it, was covered in black squiggles which critics compared to the doodles of a child. According to Paper Magazine the dress was a collaboration between Alexander McQueen and London art students.

The publication claimed students at Central Saint Martins sketched impressions of dancing girls during one of their classes.

These were then hand hand-embroidered by Alexander McQueen employees to produce the final look.

However Twitter users jokingly suggested Trump may have drawn the lines on with a marker.

One wrote: “Melania pulled a plain white dress for her evening in North Dakota and before they left Trump took a sharpie marker to it.” 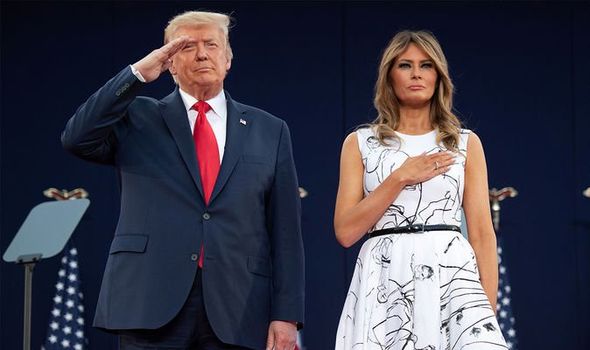 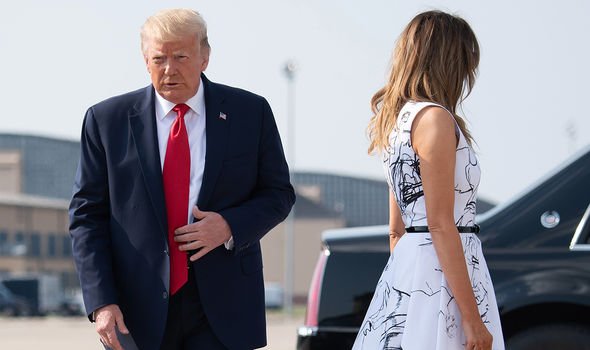 “Will somebody please take that sharpie away from him!" (Image: GETTY)

Another jested, in reference to the president, “Will somebody please take that sharpie away from him! Now he's drawing on Melania's dress”.

A third added: “Donald Trump got bored and drew all over Melania's white dress with a sharpie on Air Force One.”

Sharpie is a brand of markers pens very popular in the United States.

On Friday Melania accompanied her husband to Mount Rushmore where the president delivered a speech attacking “cancel culture” following attacks on statues and monuments across US cities. 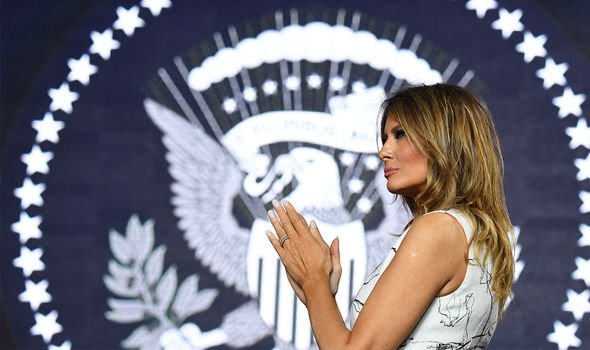 Melania's dress pictured from side on during the Mount Rushmore event (Image: GETTY)

The couple, along with 7,000 spectators, then watched a military flypast and fireworks display.

During his address Trump claimed: “In our schools, our newsrooms, even our corporate boardrooms, there is a new far-left fascism that demands absolute allegiance.

“If you do not speak its language, perform its rituals, recite its mantras, and follow its commandments, then you will be censored, banished, blacklisted, persecuted, and punished.

“Make no mistake: this left-wing cultural revolution is designed to overthrow the American Revolution. 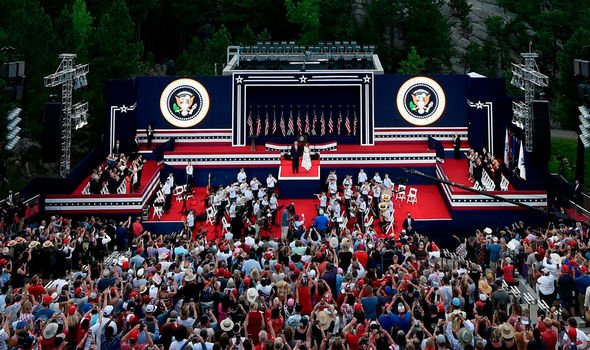 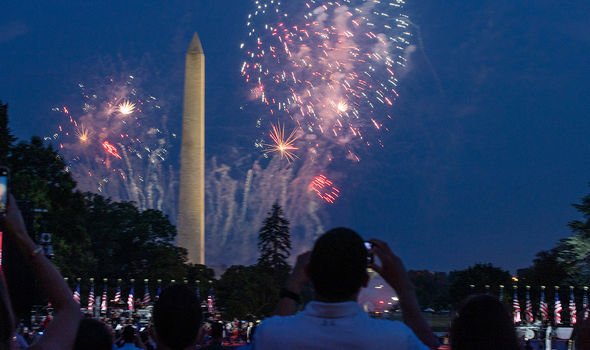 Fireworks being set off in Washington DC to celebrate Independence Day (Image: GETTY)

“In so doing, they would destroy the very civilisation that rescued billions from poverty, disease, violence, and hunger, and that lifted humanity to new heights of achievement, discovery, and progress.

“To make this possible, they are determined to tear down every statue, symbol, and memory of our national heritage.”

However some commentators criticised Trump as attendees at the event weren’t required to wear masks or practice social distancing.

In criticising Melania’s dress a number of social media users referenced an event last September where Trump was accused of using a sharpie to alter a map of Hurricane Dorian.

One tweeted: “Apparently Trump tried to draw a hurricane path on Melania’s dress.”

Another added: “Looks like Melania needs #IndependenceFromTrump as well.

“He gone and doodled with the sharpie all over her dress now. I thought they took away his sharpie after the hurricane incident?” 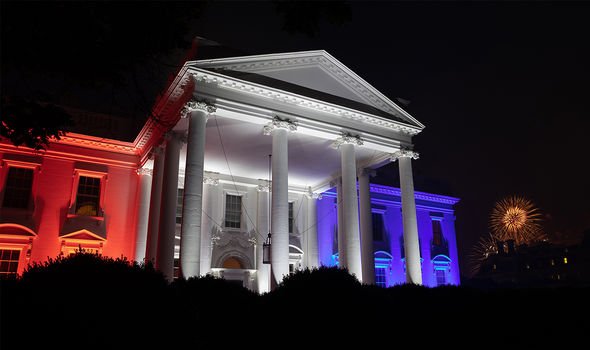 The White House is lit up in red, white and blue to celebrate Independence Day (Image: GETTY)

On Saturday the President and First Lady celebrated Independence Day with a party at the White House.

However July 4 celebrations were cancelled in many American towns and cities in response to the ongoing coronavirus epidemic.

Barcelona has signed 19-year-old Sao Paulo forward Maia for 4.5 million. Compensation – 300 million euros
A video of homophobic slurs against Chelsea fans was removed by a bookmaker after criticism from the club's LGBT fans
Lazio will play in the 2020/21 Champions League thanks to Roma's relegation from the Europa League
Zidane about the game with Manchester City: real are at a disadvantage, this match is like a final
Maurizio Sarri: My future at Juve does not depend on the match against Lyon. Otherwise, the management will present themselves as Amateurs
Norwich refused to sell defender Lewis to Liverpool for 10 million pounds
Maurizio Sarri: Lyon has improved. Juve will have a difficult match
Source https://www.express.co.uk/news/world/1305239/Melania-Trump-news-First-lady-4-July-Independence-Day-Donald-Trump-president?utm_source=feedburner&utm_medium=feed&utm_campaign=Feed%3A+daily-express-news-showbiz+%28Express+%3A%3A+News+%2F+Showbiz+Feed%29

Mum only ate porridge in desperate bid to lose weight

More countries have been added to UK quarantine list

Three cricket clubs have been closed after coronavirus outbreak

Woman's one minute trick for getting rid of plastic tub stains

Refugees tell of brutality as people-smuggling across Channel booms

Mississippi: More than 100 children and teachers in quarantine due to coronavirus outbreak two weeks after schools reopened

Brits have found love, got a job and saved a life thanks to online tutorials

Girl, 11, kicked and punched by another youngster in sickening park 'attack'

Kate Ferdinand looks stunning as she shows off her pregnancy style

Keeley Bunker’s tearful mum slams ‘evil friend’ who raped and killed her daughter, 20, and says ‘lock him up for life’

Mum of boy, 14, killed by ‘mindless’ lorry driver distracted by Facebook tells of ‘living nightmare without my hero’

Gabriel, Bailey, and who Everton should prioritise this summer

What Greater Manchester leaders were privately briefed about Covid situation

Liverpool board 'send transfer message' to Klopp amid Thiago pursuit

Khloe Kardashian's incredible transformation as she morphs into momager Kris