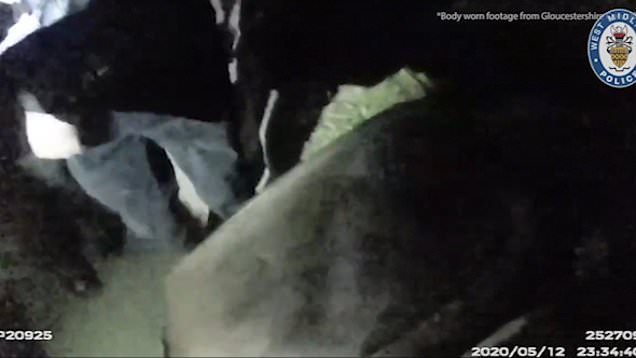 Video footage has revealed the shocking moment a killer was discovered dumping body parts of her dead flatmate in suitcases.

Gareeca Gordon, 28, was jailed for life yesterday for murdering Phoenix Netts, 28, in the Birmingham house share they both lived in.

Bristol Crown Court heard Ms Netts was killed on April 16 last year – days after she told a friend Gordon had ‘demanded sex with her’ and became ‘aggressive’ when she refused.

Gordon dismembered the body with a circular saw she bought online, before making several trips to the Forest of Dean in Gloucestershire to dispose of the remains in suitcases.

But officers caught up with her on May 12 last year after receiving reports of a suspicious car in a secluded area during lockdown.

Gordon was spotted with the suitcases at the entrance to the forest, and when police attempted to open them she tried to stop them.

‘You’re going to get arrested for obstructing police,’ an officer is heard telling her in bodycam footage.

‘I don’t want to stop you guys,’ Gordon replied, ‘Can I just explain because, as I said before, I don’t – I’ve had issues…’

The officer then made her step away, and is then heard gasping and saying, ‘what the-‘ before the footage cuts off.

Police spent weeks piecing together the actions of Gordon in the month after she fatally stabbed Ms Netts.

She carried out a series of ‘detailed, organised actions’ to fake that Ms Netts was still alive, including sending messages to her victim’s friends and family pretending to be her.

Sentencing Gordon to a minimum term of 23 years and six months, Mrs Justice Cutts described Ms Netts as a ‘deeply loved’ person who had been planning to move back in with her parents in London.

‘Her future was looking bright, shining and promising. A fresh start was ahead of her,’ the judge told Gordon.

‘You robbed her of that fresh start. You took her from the supportive parents who loved and cherished her.’

Andrew Smith QC, prosecuting, said Ms Netts had told a friend in February that Gordon had demanded a sexual relationship with her.

Ms Netts sent a text message to a friend on April 7 saying: ‘There’s a girl here who keeps asking me to be sexual. I think I’m going to move back to London. It’s scaring me lol.’

‘There’s no doubt you were pressing Ms Netts for sex in the days and weeks leading up to the murder,’ the judge added.

The last known contact Ms Netts had was a phone call with a friend in the early hours of April 16, who tried to ring her back in the day but she did not answer.

Another woman living in the shared accommodation with Ms Netts and Gordon heard noises of drilling, banging and cries of ‘help me’ that day.

Gordon was charged with murder and was due to stand trial, but pleaded guilty to the charge during a hearing at Bristol Crown Court on April 21 this year.

‘Thankfully, the remarkable and detailed police investigation in identifying Phoenix Netts led to the CPS building a compelling case against Gordon, which resulted in her pleading guilty.

‘She has now accepted the totality and consequences of her actions.’

Get in touch with our news team by emailing us at webnews@metro.co.uk.

For more stories like this, check our news page.

Drug dealer robbed customer of £2,000 after punching him in face

Daughter, 21, who ‘stabbed mum to death & cut out her beating heart’ laughs in court when asked if she’s sorry

Man attacked brother and his own partner after sharing a meal

Who is Aaron Clancy from The Bachelorette?

Akins IS with Burton Albion for another year

The best plus-size swimwear brands for fuller busts and figures

Soldier suing MoD for £3,700,000 after getting trenchfoot filmed dancing at BBQ

New horned dinosaur found in US was ancestor to triceratops, paleontologists say

MSPs to be sworn in at Holyrood tomorrow

Children should not be going to school hungry, says Lord Lebedev

When Eid al-Fitr is in the UK, Pakistan and Saudi Arabia

Burglars who tortured Brit mum to death ‘may have been tipped off about £13,000 cash hidden in their home’

Colorado party gunman killed six in anger at not being invited to gathering, police say

The cause that won’t go away: Latest conflict shows Palestine is back on the international agenda

The Woman In The Window release date, trailer and plot explained

Scotland's schools ranked from best to worst in 2021 league table

How to break up with someone the right way

Pollution has fallen to decade low in South Lakeland

Girl, 3, dies ‘after dad forced her to sit in boiling bathwater’

Scots can visit to world's largest Primark on 2021 staycation

What is Martin Kemp’s net worth and when did Roman’s kemp dad join Spandau Ballet?

Tony Blair is hoping to make himself relevant by being right – but will the Labour Party listen?

Where are the cast of Taggart now? From tragic deaths to kids TV and even an estate agent

Pub shut down after police find wedding guests eating inside