A propaganda campaign orchestrated by Britain played a crucial part in one of the most brutal massacres of the postwar 20th century, shocking new evidence reveals.

British officials secretly deployed black propaganda in the 1960s to urge prominent Indonesians to “cut out” the “communist cancer”.

It is estimated that at least 500,000 people – some estimates go to three million – linked to the Indonesia Communist party (PKI) were eliminated between 1965 and 1966.

Recently declassified Foreign Office documents show that British propagandists secretly incited anti-communists, including army generals, to eliminate the PKI. The campaign of apparently spontaneous mass murder, now known to have been orchestrated by the Indonesian army, was later described by the CIA as one of the worst mass murders of the century.

As the massacres started in October 1965 British officials called for “the PKI and all communist organisations” to “be eliminated”. The nation, they warned, would be in danger “as long as the communist leaders are at large and their rank and file are allowed to go unpunished”.

Britain launched its propaganda offensive against Indonesia in response to President Sukarno’s hostility to the formation of its former colonies into the Malayan federation which from 1963 resulted in a low-level conflict and armed incursions by the Indonesian army across the border. In 1965 specialist propagandists from the Foreign Office’s information research department (IRD) were sent to Singapore to produce black propaganda to undermine Sukarno’s regime. The PKI was a strong supporter of both the president and the Confrontation movement. 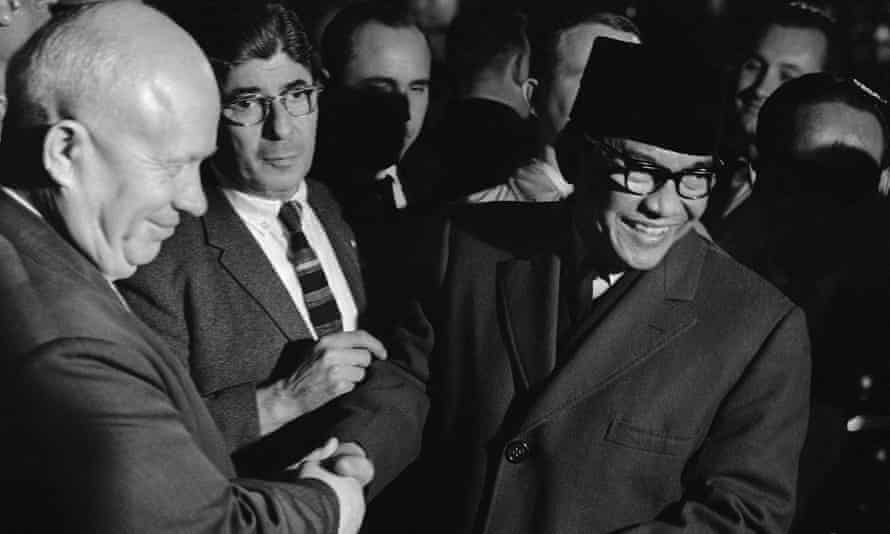 A small team produced a newsletter purporting to be produced by Indonesian émigrés and targeted at prominent and influential individuals, including army generals. It also supplied a black radio station broadcasting into Indonesia run by the Malaysians.

By mid-1965 the operation was in full swing, but an attempted coup by leftwing army officers and, secretly, by agents of the PKI, in which seven generals were murdered, provided the chance to have a real impact on events.

The coup was swiftly crushed by Indonesia’s future president General Suharto, who then set about a gradual seizure of power from Sukarno and the elimination of the PKI, then the biggest communist party in the non-communist world.

The propagandists called for “the PKI and all it stands for” to be “eliminated for all time” advising its influential readers that “procrastination and half-hearted measures can only lead to… our ultimate and complete destruction”. Over the following weeks massacres of alleged PKI members, few if any with any involvement in the attempted coup, and other leftists spread across the archipelago.

There can be little doubt that British diplomats became aware of what was happening. Not only could GCHQ intercept and read Indonesian government communications, but its Chai Keng monitoring station in Singapore enabled the British to trace the progress of army units involved in suppressing the PKI.

According to Dr Duncan Campbell, an investigative journalist and expert on GCHQ, they had technology enabling listeners to “locate the positions of Indonesian military commanders and units who were sending, relaying and receiving orders for the roundup and murder of those supposedly linked to the PKI”.

A letter to the British ambassador in Djakarta from the “coordinator of political warfare”, a Foreign Office propaganda specialist called Norman Reddaway, who arrived in Singapore in the aftermath of the attempted coup, reveals the policy was “to conceal the fact that the butcheries have taken place with the encouragement of the generals”, in the hope that the generals “will do us better than the old gang”.

Tari Lang, then a teenager in Indonesia whose father and mother, the late human rights activist Carmel Budiardjo, were imprisoned by the army, says the documents are “horrendous” and the British government bears some responsibility for what happened. “I am angry that my government, the British government, did this. The British did nothing to stop the violence once it had started.”

Reddaway considered the downfall of Sukarno to be one of Britain’s greatest propaganda victories. In a letter written years later he said “the discrediting of Sukarno was quickly successful. His Confrontasi was costing us about £250,000,000 a year. It was countered and abolished at minimal cost by IRD research and techniques in six months.”

According to Professor Scott Lucas, the declassified documents “show how central IRD and black propaganda continued to be” in postwar British foreign policy and in its overseas operations. “This was a relatively inexpensive way for Britain to project influence even if that influence can’t be openly admitted.”