Marines accused of being involved in the stunt had scrawled a swastika on their comrade in an “initiation” ceremony, The Mail on Sunday reports.

The alleged scandal occurred during a training exercise to prepare for any future conflict with Russia, the title reports.

Top brass reportedly fears the shameful video being leaked, and a senior officer warned troops that anyone sharing the clip would face disciplinary action.

Those allegedly involved were members of the Future Commando Force (FCF). 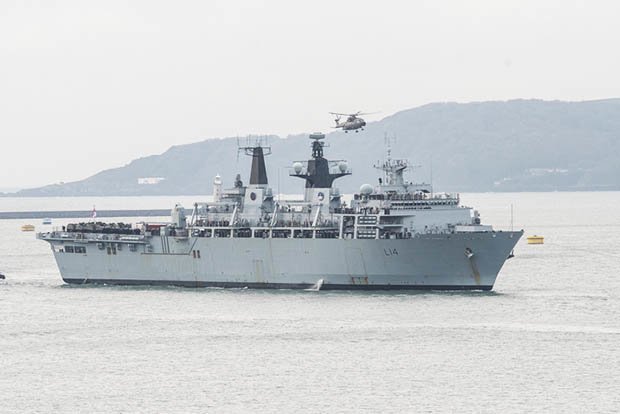 ROYAL NAVY: The HMS Albion where the alleged 'Nazi ritual' is said to have taken place (Pic: GETTY STOCK)

“This wasn’t a time to get drunk, daub swastikas on each other and do other unthinkable acts”

In a message to troops, a senior officer wrote: “The Commandant General Royal Marines has directed that anyone with the recent video from Ex BP [Exercise Baltic Protector] is to delete it immediately.

“Anyone found forwarding it, particularly to public forums, will face disciplinary action.

“It includes booze, s*** and swastikas.

“If it reaches social media we can kiss goodbye to any additional responsibilities as well as runs ashore [social privileges].

“Talk of it may kill FCF dead.”

One commando told The Mail on Sunday: “No wonder senior officers were desperate to destroy all the evidence that this Nazi ritual took place.

“Exercise Baltic Protector was supposed to send President Putin a message that we’ve got the amphibious capability to defend Baltic and Scandinavian states.

“This wasn’t a time to get drunk, daub swastikas on each other and do other unthinkable acts.

“Military chiefs might expect it to happen very occasionally back home, but never on a ship sailing near Russian waters. It looks so unprofessional.

“It will have very serious consequences for those involved and the FCF.”

Last night, a Ministry of Defence spokesman told the title: “We are aware of a video circulating online.

“This behaviour is unacceptable. A formal investigation is under way and it would therefore be inappropriate to comment further.”

800,000 people unaware they have hidden savings in NS&I accounts - claim it back

City restaurant caught in 'perfect storm' of Brexit and Covid

John Lewis’s summer sale has started – these are the bargains to snap up across homeware, tech and fashion

Bank of England warns of rising inflation, but rates hold

18 Things you may know if you live in Sunderland

Woman climbs out of boot after driving right through garage wall

Cannabis farm discovered inside a Walton home during police raid

Delta variant to account for 90% of Covid cases in EU by end of August, health official warns

No decision on whether masks can be binned on July 19, says No 10

Arrests after £84m of cocaine smuggled from UK to Australia

I’m happy Juneteenth is a federal holiday. But don’t let it be whitewashed | Akin Olla

When will the UFO report be released by the Pentagon?

Love Island winner's prize and how much islanders are paid

Two charged after cannabis plants are recovered from Falkirk property

Botched Botox and fillers left us with huge pus-filled boils, unable to leave the house for a YEAR and almost blinded

Fraudster sold car on Gumtree for £5,200 then refused to hand over vehicle

Arrests after £84m of cocaine flown from UK to Australia

Warning over Covid at staycation sites after 'tsunami' in Cornwall

More than half of all US buildings are under threat from natural disasters, study finds

£2,000 found in grass after man jumps fence to escape police

Extent of damage to animals by badger baiter difficult to realise, say charity

Double-jabbed Brits will get 'real opportunity' to travel this year, PM declares