Emergency services, including officers wearing full-body hazmat suits, have sealed off a branch of Prezzo on High Street in Salisbury city centre, Wilts.

Paramedics were called to the restaurant at around 5:38pm on Sunday to reports of a "medical emergency" involving a man and woman who fell ill.

The pair, who have not been identified, are conscious and being treated at the scene by medics, a spokeswoman for South Western Ambulance Service said.

An eyewitness told the BBC police had said the victims were: "Two Russians," described as "both seriously ill, they weren't sure with what".

A source briefed by emergency services said: "The ambulance crew at the site took the decision that the symptoms seemed consistent with Novichok poisoning which is why they called their colleagues in the police."

It has been claimed other diners at the restaurant have been taken to hospital, where doctors have told them they may need blood tests.

The restaurant is close to where former Russian spy Sergei Skripal and his daughter Yulia where found slumped on a bench after being exposed to deadly Novichok nerve agent.

The Skripals are not thought to have visited the Prezzo but did eat at a nearby branch of Zizzi around 300m away before they both became critically ill on March 4. 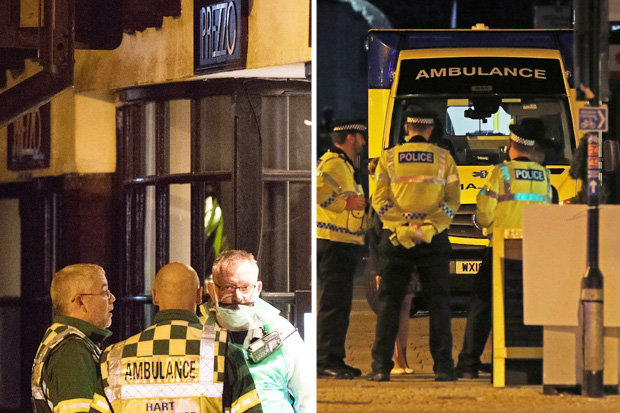 LOCKDOWN: A Prezzo has been cordoned off by police after a man and women fell ill (Pic: PA)

PARAMEDICS: The patients are unconscious and are being treated at the scene (Pic: TWITTER/@AmandaWorne)

A large-scale clean-up operation costing millions of pounds was carried out across Salisbury in the wake of the attack to eradicate any trace of the deadly nerve agent.

Wiltshire Police said the restaurant and surrounding roads have been cordoned off "as a precautionary measure" while police identify the cause of the “medical incident”.

Eyewitnesses claim police were “covering someone with a blanket” at the scene where a fire engine, ambulance and four police cars have swooped.

One witness claims the pair who fell ill are “Russians” who were showing the “same symptoms” as the Skripals, who fell unconscious and were frothing from the mouth.

The police are yet to reveal the identities and nationalities of the people who fell ill.

Amanda Worne said on Twitter: "Feeling a little apprehensive as Salisbury leaps to action again when 2 Russians are taken ill in Prezzos showing the same symptoms as before ..... AND WE WERE SITTING NEXT TO THEM!"

In a separate post on Facebook, she added: "How on earth did we get caught up in this? A nice meal in Prezzo turns into a major incident as two Russians sitting next to us take seriously ill and the whole area is closed.

"We are being taken to a safe place and may need blood tests at Salisbury hospital."

Witness Sam Proudfoot, 16, said he saw a person in a hazardous material suit go between the restaurant and the ambulance.

"I've been told two people were taken ill in there," he said.

"There's a man in a full white body suit with a mask to his mouth going in and out of the back of the ambulance and the restaurant."

Four ambulances were sent including a hazardous area response team, a spokeswoman for the service said.

The road closures are affecting New Street, Crane Street and the entrance to the Cathedral Close.

Public Health England said they had been made aware of the incident.

People inside the Old Ale House pub were told they could not leave as police officers seen in protective clothing entered the restaurant.

A worker at pub The New Inn said: "Police have been very vague about the whole thing.

"We don't know what's going on.

"As soon as the emergency services turned up people started evacuating.

"We've only got a few customers left."

“As a precautionary measure, the restaurant and surrounding roads have been cordoned off while officers attend the scene and establish the circumstances surrounding what has led them to fall ill.

“Anyone with information should call 101 and quote log number 271 of 16 September.”

The emergency services source also stressed: "The symptoms of Novichok poisoning and particular types of narcotic abuse are very similar.

EMERGENCY RESPONSE: The area surrounding the restaurant has been cordoned off (Pic: TWITTER/@AmandaWorne)

Britain has said Russian officers used the nerve agent Novichok to attack the Skripals, but the Kremlin has denied any involvement.

The former Russian spy and his daughter survived the murder attempt, but an unconnected woman, Dawn Sturgess, died in July and her partner Charlie Rowley fell ill after Rowley found a perfume bottle containing the same nerve agent.

Earlier this month British prosecutors identified two Russians they said were operating under aliases - Alexander Petrov and Ruslan Boshirov - whom they accused of trying to murder the Skripals with a military-grade nerve agent.

Britain charged the two men in absentia with attempted murder and said the suspects were military intelligence officers almost certainly acting on orders from high up in the Russian state.

Two Russians resembling the men said on television on Thursday that they were innocent tourists who had flown to London for fun and visited the city of Salisbury to see its cathedral.

Zinedine Zidane: I would like VAR not to be used
Tottenham – Arsenal. Who will win: Mourinho or Arteta?
Zinedine Zidane: if the referee gives a penalty, it means it is a penalty
Lizard on the criticism of VAR: In Real life, they don't pay attention to conversations outside the team
Real need to score 5 points in 3 rounds to win La Liga
Gasperini about the 1/4 final of the Champions League: the Match with Juventus is an imitation of the games with PSG
Courtois played 18 dry games in the La Liga season. Real's record is one game away
Source https://www.dailystar.co.uk/news/latest-news/730089/salisbury-prezzo-restaurant-cordoned-off-man-woman-ill-novichok-skripal-attack?utm_source=feedburner&utm_medium=feed&utm_campaign=Feed%3A+daily-star-latest-news+%28Daily+Star+%3A%3A+News+Feed%29

How Man City should line up vs Brighton

Some Universal Credit claimaints faced delays even before crisis

Surprising household items that can be cleaned in the washing machine

Surprising items that can be cleaned in the dishwasher

How an egg producer tackled gut disease with bacteria spray

How to fit a fertiliser kit to a John Deere drill

UFC 251 tips and odds: Get £10 free bet for Kamaru Usman vs Jorge Masvidal tonight with MrPlay

Tim Dowling: Everyone stares. Are they smiling behind their masks?

Blind date: ‘We played the Guess How Old I Am? game’

'Too big to fail': why even a historic ad boycott won’t change Facebook

Man desperately waits for a stranger to save his life

Swansea's vital resurgence and the Leeds challenge lying in wait

Mum explains how she transformed small space into a dressing room

Burnley, Wolves, Arsenal, Sheffield United, Spurs and the inside track on the Europa League battle

LFC face ‘other Alexander-Arnold’ who could offer transfer solution

Frank McAvennie of Celtic and West Ham: the Mavericks of Scottish Football

6 unexpected health conditions you MUST tell DVLA about - or face £1,000 fine

'Glazed' cocaine driver wrote off car by smashing into railings

Small abattoirs failed by lack of joined-up thinking from Government

Blackburn man attacked lodger friend when he refused to move out

'Devious, manipulative' Joseph Sweeney jailed for having sex with teen

REVEALED: The best and worst GP surgeries in Blackburn and Darwen...rated by you

Darlington's lost pubs - what memories do you have of them?

Teenager slips and dislocates knee while putting socks on at Borrowdale

Ten things Burnley Council will do to recover from coronavirus

REVEALED: The best and worst GP surgeries in East Lancashire including Ribble Valley, Hyndburn, Burnley, Rossendale and Pendle rated by you

Nostalgia: Ulverston schools look to the future while not forgetting a long and illustrious past

Staycations in Wales: How to make the most of your holiday at home

'We tried Wing's after lockdown and wish we hadn't'

Pub of the Week: Ye Olde Crown. Which pub do you want us to feature next?

We went to Liverpool Airport for the first time since lockdown

Calls for everyone in Liverpool to celebrate Nelson Mandela

Woman transforms couch for less than £20