Schitt's Creek: the five things that make it such perfect, Emmy award-winning TV

1. Moira is a creation unlike any other

Catherine O’Hara is one of the best comic actors around and she does not disappoint in this role. Her matriarch Moira is simply one of the best characters to ever appear on screen, from her wigs to her dauntless self-centredness, but the true masterstroke is her accent. Described by one character as “unrecognisable”, it has been the subject of countless think pieces: it’s been labelled “one part British/Canadian/mid-Atlantic with a retro Hollywood spin”; it is sprinkled with “a kind of unhinged verbosity”; and is frankly just plain “bonkers”. Her verbose and outlandish pronouncements are pure joy.

David and Patrick’s relationship is romantic and charming and totally normal in every way. The show’s creator, Daniel Levy, has spoken about how important this was to him and what a huge step change it was for American television.

A documentary about the show reveals that a group of more than 1,800 mothers of LGBTQ kids wrote to the cast of Schitt’s Creek to thank them for everything the show had done for their kids.

It read, in part: “Your commitment to represent love and tolerance in your show is so important to families like ours. Your willingness to explore, inform and educate about LGBTQ people and their relationships in an entertaining but respectful and positive manner sets a tone that is often missing ... We sincerely believe that shows like Schitt’s Creek will serve as a catalyst to help change the world into a kinder, safer, more loving place for all LGBTQ people to live, and because of that we will remain forever grateful.”

3. It’s so much more wholesome than you expect

This show is a lovely, romantic, smile-inducing bundle of happy feelings. But you don’t know that when you start watching. It begins with the titular joke: a mega-rich family have lost everything – apart from a town called “Schitt’s Creek”, haha, which father Johnny Rose (played by Eugene Levy) had once bought for his son, David (played by his real life son and show co-creator, Daniel Levy) as a joke.

They arrive in the hick town full of scorn and superiority, making all the cliched jokes about the locale and its folky inhabitants. But the joke’s on them: it’s the townsfolk the audience relates to, recognising how ridiculous, unhinged and completely devoid of reality the Roses are. It is through their necessary encounters with people in the town that the Roses learn what family really is, and find themselves guided into the first healthy relationships they’ve ever had. Who knew wholesome could be so funny?

4. The wardrobe is to die for (and die laughing over)

It would be tempting to only list Moira’s at times outrageous, beautiful, perfect and ludicrous outfits in this category. Who can forget the garbage bag ensemble she wore when she accidentally ended up on a photo shoot with a hot-shot New York photographer and former lover of David? 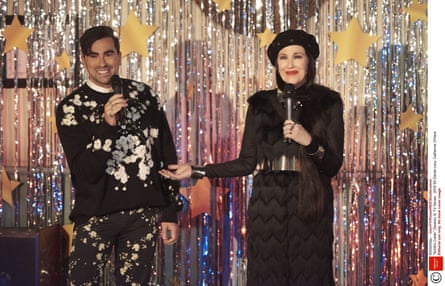 Her precious collection of wigs, known as “the girls”, practically have their own storyline. The $3,700 Pamel­la Roland Dou­ble Cape Tulle Gown with Se­quin and Os­trich Feath­er Plumes from Harrods of London certainly gets an episode all for itself (before being returned) and the shiny gold pantsuit with bows is definitely the star of the show when Moira runs for council. But the absolute pièce de résistance is of course in the final episode, which could be described as “Pope-chic”, when she officiates at David and Patrick’s wedding.

But to leave out Johnny’s impeccable suits, or David’s black and white designer ensembles with his penchant for jumpers – even in summer – or Alexis’s representation of the Coachella generation would be remiss. So watch out for those, and for all the designer nudges too. More than once, I found myself googling an Alexis dress (I couldn’t afford any of them).

Without giving too much away, there are two episodes with scenes in them that revolve around this song that I rewatch every time I feel down. They should be beyond cringeworthy and the show certainly sets them up that way. The surprise is that they are the precise opposite: with the lightest touch, the first scene is a huge turning point for David’s character and for this burgeoning relationship with Patrick. When he does his own version of the scene a few episodes later, we know this is gonna last.

With Lukaku, it is useless to play in a power struggle. Shakhtar defender Bondar on the Inter forward
Ivanov will serve the match OF AZ-Rijeka in the Europa League. Rotor appealed his refereeing in the game with Loko
Gasperini on Ajax: it's not easy for everyone Against them. Atalanta made a great comeback
Real Madrid came away from defeat for the 8th time in a Champions League match, losing by 2 goals. The club has updated its record
Felix on red Bull's double: I enjoy playing in the Champions League the Most
Casemiro about 2:2 with Gladbach: The opponent entered the Real Madrid penalty area twice and scored twice. This is football
Guilherme about 1:2 with Bayern: Loko again showed that he can play against any opponent
Source https://www.theguardian.com/tv-and-radio/2020/sep/21/schitts-creek-the-five-things-that-make-it-such-perfect-emmy-award-winning-tv

We thought Reagan was the devil – then came Trump. America, we're rooting for you

Christmas shoppers are starting to buy presents now due to Covid

Attacks on fire crews ahead of Halloween after 'misery' last year

Mum widowed at 42 after husband complained of a 'stomach bug'

PIP claimants could be owed thousands after law change

How to get a free letter from Father Christmas this year

Tanzania votes for president amid fears of violence, fraud

Scots drugs deaths 'way out of control' according to latest report

One of world's oldest whiskies sold at auction for £92k

Second night of chaos in Philadelphia as ‘over 1,000’ looters trash stores after cop shooting of black man with knife

'We need you': GOP hunts for new voters in Trump territory

Trump to appeal to Nevada voters from neighboring Arizona

Anxiety 2020: Voters worry about safety at the polls

Review: With high sorcery, 'The Craft: Legacy' casts a spell

US accuses Syria of delaying constitution ahead of election

Rare parasites 'which can cause human miscarriages' found in donkeys

Manchester Arena attack: Security guard did not approach suicide bomber out of fear of being branded racist, inquiry hears

New Zealand counts down to verdicts on cannabis and euthanasia votes

If the global recession intensifies, only the US can pull the world out of it – but will Bidenomics save us?

All of England 'must be under Tier 3 lockdown' by Christmas, scientists warn

Dad, 29, collapses after suffering heart attack and stroke in front of five kids