First minister Nicola Sturgeon has said guiding Scotland safely through the Covid pandemic is her “number one priority” as she prepares to give her latest update on restrictions.

The SNP leader is due to confirm whether the easing of curbs can go ahead next week as planned, in the hope of returning the country to “something much more like normality”.

Ms Sturgeon had previously indicated Scotland could move from level 3 to level 2 restrictions from Monday 17 May, so long as Covid cases continued to fall and the vaccine rollout carried on as planned.

Her first Covid briefing since her Holyrood election victory is expected to begin around 12 noon, and will be broadcast on the Scottish government’s social media channels.

Speaking ahead of her latest coronavirus update, Ms Sturgeon stressed the need to “remain vigilant” to ensure virus levels do not increase again. 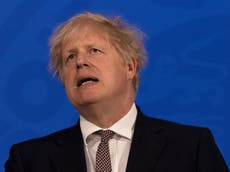 Moving to level 2 under the Scottish government’s five-tier system would mean that friends and family could meet inside houses, with gatherings involving up to four people from no more than two households permitted.

Pubs and restaurants would also be allowed to serve alcohol indoors in level 2, while cinemas, theatres, concert halls, music venues, comedy clubs, amusement arcades and bingo halls would all be allowed to reopen.

However, in Moray, which has the highest number of Covid-19 cases in Scotland, public health bosses have said it is “entirely possible” that the area will not be able to see restrictions eased to level 2.

On Monday, Boris Johnson confirmed people in England will be able to hug loved ones, dine in restaurants and go on holiday abroad from 17 May.

Earlier in the day the national Covid alert level was downgraded after a “consistent” fall in cases, hospital admissions and deaths, with the four chief medical officers of the UK – including Scotland’s Dr Gregor Smith – saying the threat level should be reduced.

“Today we will outline those latest steps in lifting restrictions, while also making clear that we need to remain vigilant against any resurgence in Covid levels across Scotland,” said Ms Sturgeon ahead of her announcement.

On Monday, deputy first minister John Swinney said it was the new Scottish government’s “aspiration” to suppress the virus consistently by the end of 2021 – before pushing on with plans for another vote on independence.

Donnarumma passes medical for PSG in Rome
The sad story of the coach who led Denmark to Euro 1992 gold. He did not wait for recognition at home
Dembele will not play at the Euro again due to injury. He has left the French national team
Russian referee Sergey Karasev will work on the Euro 2020 match between Germany and Hungary
The Schmeichels are a unique goalkeeping dynasty. But Casper has long been hampered by the greatness of his father
Laporta about the Super League: The project is alive. We will not apologize to UEFA for being the masters of our own destiny
Barcelona will sell 19-year-old winger de la Fuente to Marseille for 3.5 million euros

How to find the Love Island contestants on social media

Fatherhood: Kevin Hart is surprising a lot of people thanks to new Netflix film

Mum’s tribute to daughter ‘taken by angels’ after girl, 6, hit and killed by car as she walked with dad

Jack Grealish backed to thrive on England expectation at Euro 2020

Does the Covid vaccine cause period problems?

People forced to flee homes as fire breaks out on driveway

Can Wales fans travel to Amsterdam for Euro 2020 last 16?

Man, 55, fighting for life after falling off ‘hired’ e-scooter as he rode with friends

This should’ve been Freedom Day, say furloughed workers in pub at midday

What is club foot?

Get ready to start seeing adverts on Instagram Reels

What do England need to qualify at Euro 2020 and who will they play?

Aldi is selling a complete school uniform for just £4.50

Who is Mckenna Grace from The Handmaid’s Tale?

It's the longest day - and what that actually means

Teenage siblings assaulted by gamg of yobs in Wishaw park

Amazon Prime Day: Nintendo Switch and THREE games for under £300 in rare deal

If we want to fight the climate crisis, we must embrace nuclear power | Bhaskar Sunkara

Food loving Brits think a first date should ALWAYS be dinner, but which foods should you be avoiding?

Dealer boasted with friend about how they would become multimillionaires

I rested my way to recovery from ‘long-haul Covid’. I urge others to do the same | Fiona Lowenstein

Up to 50% off Ninja appliances on Amazon Prime Day