Storm Helene is forecast to impact the UK with powerful gusts reaching 70mph and heavy rain from around 6pm Monday evening.

In anticipation of storm disruption, the Met Office issued a yellow “be aware” weather warning covering Northern Ireland and western parts of England and Wales.

Forecasters have downgraded warnings that Storm Helene could pose a risk to life when it hits next week, but warned coastal communities to stay vigilant.

The Met Office warned on Friday the storm could bring hazardous conditions when it sweeps across the north of England and Wales and through the Republic of Ireland. 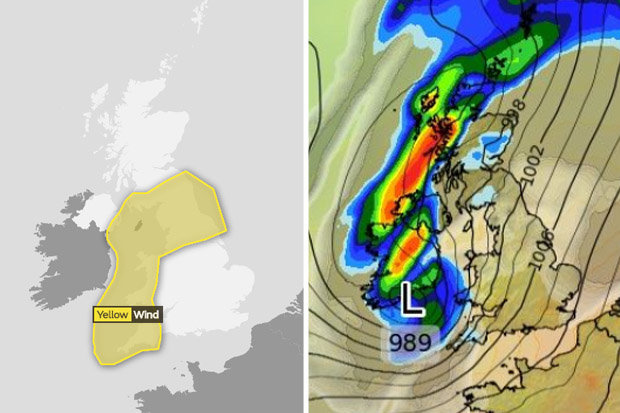 But the majority of Helene's strong winds are now predicted to spend themselves over the Irish Sea from Monday night and into Tuesday morning.

A spokesman for the Met Office said Helene could fell a few trees, which could bring disruption to transport links, but did not think it would reach the wind speeds originally predicted.

Those in coastal areas are warned to be wary of large waves hitting the seafront.

“Be prepared for it be very windy for a while”

But Helene is still due to bring unseasonably warm weather in London and the south east due as the low pressure draws up warm air from the south.

The spokesman said: "Helene is still over the Atlantic but it's weakening and we're a lot more confident of what's going to happen.

"The centre of the storm will go up through the middle of Ireland and most of the strong winds will be in the Irish sea and to the west of Scotland."

A yellow warning remains in place but the storm is not thought to pose a risk to life.

"There is not a danger to life, but we are just saying be prepared for it be very windy for a while," the spokesman said.

Devon and Cornwall, parts of Wales and County Down in Northern Ireland as well as Northumbria, Cumbria and parts of Yorkshire in north of England are likely to see strong winds.

Matt Box, forecaster at the Met Office, said: “Storm Helene will bring strong winds and rain on Monday and Tuesday.

“A wind warning is in place for south west England, northern England and southern Scotland.

“Much of the strong wind will be focused over the Irish sea with gusts of around 55-60mph while broadly Helene will bring winds of around 45-50mph as it treks northeast wards.”

Simeone on Griezmann's playing time: at Atletico, 3 minutes is very important. We lost the Champions League final like that
Griezmann looks like a parody of himself. Ex-coach of Sociedad about Antoine in Barca
Hakimi spent the super season in Dortmund, belonged to Real Madrid, and ended up at Inter
Undress and have dinner with us. Karembeu about how the players of Real Madrid joked Casillas
Hakimi moved from Real Madrid to Inter
Icardi on leaving Inter: PSG-a step forward. I want to win trophies
Giress about the Best-2019 award: Mane should have been ahead of Messi
Source https://www.dailystar.co.uk/news/latest-news/730097/weather-forecast-uk-storm-helene-met-office-warning-bbc-london-monday?utm_source=feedburner&utm_medium=feed&utm_campaign=Feed%3A+daily-star-latest-news+%28Daily+Star+%3A%3A+News+Feed%29

Rashford jokes that Phelan was inspiration behind Fernandes goal at Brighton

When are EasyJet summer 2021 flights released?

When will libraries reopen in the UK as lockdown rollbacks continue?

Parents 'hearts have been ripped out' after boy, 3, killed in Edinburgh crash

'Friends are being hostile after I stuck with cheating husband'

Man seen ‘rolling around on fire’ after huge van explosion

INEOS lowers its guard on the Grenadier

Hunt launched for boy, 9, who vanished in pyjamas while putting bins out

Man arrested after 'exposing himself to women' in Hull city centre

What areas of England could go into local lockdown next and what are Pillar 1 and Pillar 2 testing?

Schools reopening explained: Everything you need to know about September return to class

Man, 39, found dead by family after they couldn't get hold of him

Amazing life of baby Ecclestone whose sister is 65, billionaire dad Bernie is 89 and owns £30m yacht and luxury homes

The 90s faces of Wales’ celebrities before they were famous

Killer poses in hot tub hours after being released from prison

Will Liverpool get a Premier League trophy presentation against Man City tonight?

Clap for NHS: What time and when it will take place this weekend

Why Canadian white-throated sparrows have changed their tune

Allan Saint-Maximin is up there with Newcastle's great wingers

Five rat run bridges in Newcastle will be closed to traffic

What TV channel is Sheffield United vs Tottenham on?

The buzz is back in our showrooms

China warns of ‘consequences’ after Boris offers lifeline to 3,000,000 in Hong Kong

To dodge the worst of COVID, we must oppose the British government