The Tory frontbencher stressed on the importance of the future of the UK as a free and independent nation post-Brexit, ready to take back control on its borders and waters. Mr Gove argued Britain exceeds the EU on many issues of environmental concerns and social progress, stressing the UK "does not need the EU's permission" to be a liberal country in Europe. He said: “The United Kingdom has a proud record when it comes to environmental, workers rights, and social protection.

“In a number of key areas, we either exceed EU standards or have led the way to improved standards.

“On workers rights, for example, the UK offers a year of maternity leave with the option to convert this to parental leave so that both parents can share care.

“The EU minimum is just 14 weeks. And on environmental standards, we are the first country in the world to introduce legally binding greenhouse gas emission reduction targets through the climate change act.

“We were also the first major economy to set out a legally binding target to achieve net-zero greenhouse gas emissions across the economy by 2050. 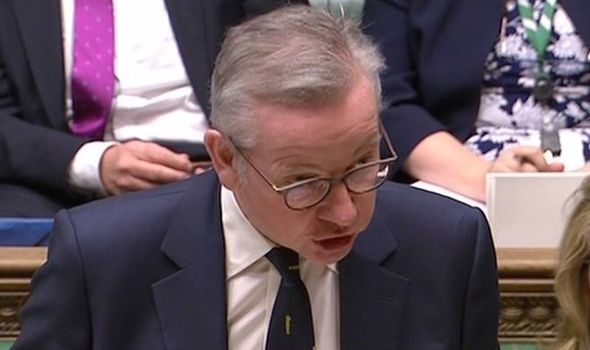 Brexit news: Michael Gove stresses UK does not need the EU to be ahead on environmental standards (Image: UK PARLIAMENT)

“We will not dilute any existing protections.”

He added: “We do not need the EU’s permission to be a liberal nation leading the world in the fight against climate change and social progress.”

Mr Gove added that the UK will seek "to emulate and build on the types of relationship that the EU already has with other independent sovereign states" and that by using already existing precedents, the UK "should be able to expedite agreement".

Mr Gove said that the Government "will require a wholly separate agreement on fisheries".

"We will take back control of our waters as an independent coastal state and we will not link access to our waters to access to EU markets.

"Our fishing waters are our sovereign resource and we want to determine other countries' access to our resources on our terms," he told MPs.

He added: "We also hope to conclude an agreement on law enforcement and judicial cooperation in criminal matters so that we can work with the EU to protect their citizens and ours from shared threats.

"But we will not allow our own legal order to be compromised and by taking back full control of our borders, we can implement measures to make the British people even safer and we can tackle terrorism and organised crime even more effectively."

With trade talks between the UK and the EU set to begin on Monday, Boris Johnson faces a race against time to get an agreement signed before the end of the transition period in December 2020, which he is refusing to extend.

The European Union has demanded the UK continues to allow fleets from inside the bloc access to British waters in order to strike a post-Brexit free trade deal.

The EU’s chief negotiator Michel Barnier warned after European ministers agreed to red lines for the negotiations in a meeting on Tuesday that fishing rights must be included in the deal or there “won’t be any agreement at all”.

Where can I buy flour for bread during coronavirus lockdown

10 free TV series to watch on BBC, ITV and Channel 4 during coronavirus lockdown

First pics of MBE-awarded pensioner, 72, who died after ‘altercation with dog walker’

Arsenal star David Luiz plays himself at rock, paper, scissors in the mirror and LOSES in mesmerising video

Can I be stopped and fined by police over the Easter bank holiday weekend?

Where is Killing Eve season 3 filmed? Locations for the BBC One show include London and Barcelona

Morrisons adds 100,000 boxes of essentials a week to help households get supplies delivered

Obesity and coronavirus – are obese people more at risk from Covid-19?

Five apps to help you learn a new language in lockdown

Real life couples in Hollyoaks self isolating together

ADVERTORIAL: Fight Covid-19 and improve your digital skills from the comfort of your home

Aldi issues apology as it removes popular items from stores

Coronavirus UK: How long will the Covid-19 lockdown be extended for in Wales?

Spain coronavirus death rate sees one in every 10 cases passing away as toll hits 15,238

Researchers show how easily cough can travel through air

Video shows how easily coronavirus cough can travel through air

Stay home and Livfit during lockdown

Majority say Obama would have dealt with coronavirus better than Trump, but Donald’s leadership judged better than Joe

After the pandemic: a ten-point plan for the collective provision of basic needs

Brit scientists snap highest ever resolution picture of the sun

The British government knew a deadly virus was coming, but failed to prepare | Richard Horton

Debenhams goes into administration putting 22,000 jobs at 142 stores at risk

Debenhams confirms it has gone into administration

Random cars to be stopped by Merseyside Police in new crackdown

Watch Hyundai's Prophecy of motoring in the future

The Walking Dead: World Beyond trailer teases how the spin-off series are connected with epic nod to Rick Grimes

Debenhams enters administration with 22,000 jobs at risk after virus shutdown

Leroy Sane gives verdict on whether season should be scrapped

MPs allowed to claim extra £10,000 in expenses to help them & staff work from home during coronavirus crisis

Liverpool's virtual session spoke volumes about Klopp and his squad

Pots of kindness during coronavirus lockdown from the soup-er women

Get the Newcastle Chronicle delivered to your door

Here's when temperatures will rise in your area this Easter weekend

How can I win a Gardening Bundle, worth over £1,000 with Sun Savers?