‘We’ve been roommates since 1994’: Jennifer Aniston jokes that she lives with Courteney Cox and Lisa Kudrow during mini Friends reunion at Emmys

The best in film, music, TV & radio straight to your inbox every week

The TV award event this year included a mixture of in-person and remote segments, with host Jimmy Kimmel performing to an empty Staples Center in Los Angeles.

Aniston, who was nominated for Outstanding Lead Actress in a Drama Series for The Morning Show appeared on video during one clip where she was joined by former co-star Cox, with Kimmel asking: “Courteney’s there?”

“Of course I’m here,” the actor replied. “We live together.” 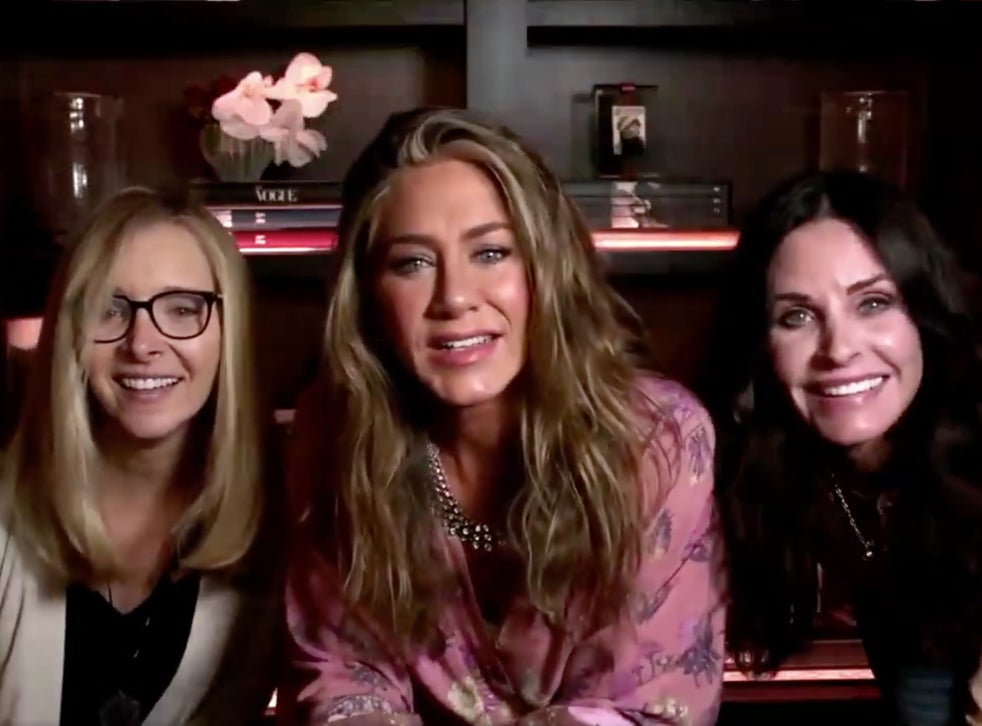 The pair were then joined by fellow Friends actor Kudrow, with Kimmel asking the actor: “Lisa Kudrow, you live there too?”, to which she replied: “Yeah, where else would I live?”

There was also a surprise appearance from Jason Bateman who asked whether Kimmel was “calling to kick me out of my own house too”, seemingly in reference to a mix-up at the Creative Arts Emmys on Saturday where the actor was wrongly announced as an award-winner.

With Kimmel questioning whether the actor also lived in the Friends stars’ house, Aniston explained that he was staying “just until he goes off to college.”

As well as appearing virtually, Aniston also appeared in an in-person segment alongside Kimmel to present the Outstanding Lead Actress in a Comedy Series category. During the accompanying comedy skit, the pair set the winners envelope on fire in a bid to make sure it was fully sanitised.

Aniston missed out on an Emmy for her role in Apple TV+’s The Morning Show, with Zendaya taking home the prize for her role as Rue in Euphoria. You can see the full winners list here.

Watching the ceremony with her Friends co-stars isn’t the only reunion Aniston has had this week, after teaming up with ex-husband Brad Pitt to read a sex scene during the virtual Fast Times at Ridgemont High reunion.

Manchester United are ready to offer Chalhanoglu a 5-year contract. In the summer he becomes a free agent
Ceferin made it clear that we are categorically against it. UEFA on Bartomeu's words about the European super League
Pep on the criticism: Defeat is becoming a disaster these days because of social media. Sometimes the opponent is better than us, this is life
FIFA about Bartomeu's words about the European super League: we do not know about any agreement
Brother, don't give up on him. He's playing against us. Benzema asked Mendy not to give the ball to Vinicius at half-time of the match with Borussia
In 2010, Pirlo negotiated with Barca. The main playmaker of the generation was ready to go to Pep even in the rotation
Chugainov about Loko in the Champions League: there are Chances to get out of the group. The team looks confident and worthy
Source https://www.independent.co.uk/arts-entertainment/tv/news/friends-reunion-emmys-2020-jennifer-aniston-courteney-cox-lisa-kudrow-b510931.html

Jail for Blantyre man who was nabbed with £23,000 of cocaine

Flight from Scotland diverted due to 'lightning strike'

Genius Aldi shopper on how to get cheaper shopping every time

First Thoughts: Why I fear Biden won’t win, my friend Jeffrey Archer, and the Daily Mail after Dacre

Poppy signs are being painted on roads to mark Remembrance Sunday

The hybrid Honda Jazz will be music to motorists' ears

Thousands more set to be placed into Tier 3 restrictions

High levels of coronavirus cases and deaths 'could last until spring'

Asda shoppers in disbelief at its new homeware collection

Brian Reid says Albion Rovers must get points on the board... and fast

Welsh Government sets out what will reopen after firebreak ends

Amazing pictures show ‘hot’ mums and daughter who look the same age – can YOU tell who’s who?

Burglar caught asleep next to half a cheesecake in restaurant

The enormous £40m water park opening an hour from Manchester

Woman arrested after car crashes into pedestrian and lamppost

ADVERTORIAL: Help Erskine care for our Forces heroes like Frank

What language does Borat speak?

Have you seen Fayrus, 17, missing from Ilford?

Gervonta Davis vs Leo Santa Cruz tale of the tape: How do two of best in world compare ahead of huge clash

Letter of the Week: Speaking from experience

Christmas dinners in lockdown areas will be broken up even if fewer than six people present, Government warns

Could there be a second lockdown in England?

Why the US presidential vote is Russia's unwinnable election

Exeter's wish to take on world set to be granted, according to Euro Clubs' boss

Mum and two kids found dead at house in Dublin

Two arrested after drugs, cash and rifle seized by police in Stockton

Relief and dismay for residents over new traffic orders