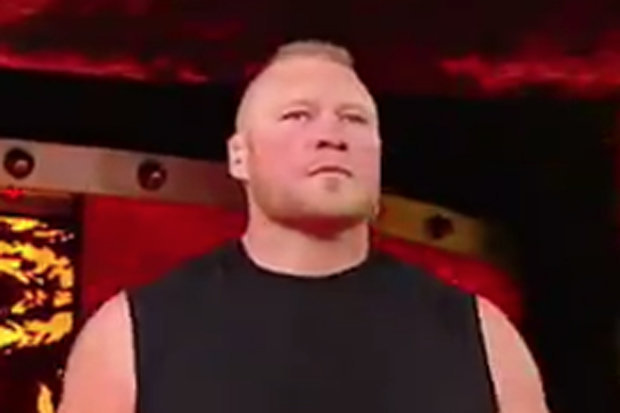 Lesnar marched to the ring just after Seth Rollins and Dolph Ziggler plunged from the Hell in a Cell during the chaotic final match.

Climbing into the ring, Brock grabbed shards of a broken table and proceeded to beat Roman and Strowman until the two couldn't continue their match.

The 41-year-old hadn't been seen since his record-setting 504 day WWE Universal Championship reign was ended by Reigns at SummerSlam one month ago.

His comeback shocked WWE fans who had expected Brock not to be seen again as he looks to return to the UFC.

“The Beast Brock Lesnar just straight up stole this show”

WWE tweeted: "The Beast Brock Lesnar just straight up stole this show. Neither Roman Reigns or Braun Strowman can continue."

Brock stood over their battered bodies as the referee was forced to call for the bell – ending the Hell in a Cell in a no contest.

Fans exploded when Lesnar marched to the ring during the main event – despite the latter days of his title reign having a lukewarm reaction.

It is unclear how long Brock will be sticking around for – and whether or not he will get his rematch with Reigns.

BROCK LESNAR: The UFC fighter marches to the ring with his advocate Paul Heyman (Pic: WWE)

NO CONTEST: Roman Reigns and Braun Strowman were battered by Lesnar (Pic: WWE)

WWE fans had been becoming increasingly critical Brock's reign, which was breeding contempt from the crowd rather than loathing for the Lesnar.

Lesnar previously left the company in 2004, being away for eight years before returning in 2012.

Since returning he has been on a dominant run, even ending the Undertaker’s winning streak of 21 straight victories at WrestleMania.

Sarri Pro 2:2 with Atalanta: We played with one of the best teams in Europe right now
Pep Guardiola: Manchester City have won a place in the Champions League on the pitch. I hope that UEFA will allow us to play
Atalanta extended their unbeaten streak to 14 games and is ranked 3rd in Serie A
Ronaldo scored his 27th goal in Serie A, converting a penalty in the game against Atalanta. Immobile has 29 balls
Sterling scored 27 goals for the season and broke his record. He scored a hat-trick against Brighton
Three Atalanta players have scored 15+ goals in the Serie A season. This is the best result since 1952
Setien on the title fight: Barcelona does everything possible, but Real Madrid wins all the matches
Source https://www.dailystar.co.uk/news/latest-news/730142/wwe-hell-in-a-cell-brock-lesnar-results-roman-reigns-braun-strowman-return-paul-heyman?utm_source=feedburner&utm_medium=feed&utm_campaign=Feed%3A+daily-star-latest-news+%28Daily+Star+%3A%3A+News+Feed%29

Coronavirus live as masks 'compulsory' in shops from next week

Royal fury: 'Secretive' monarchy sparks outrage amid call for Queen to be OUSTED from role