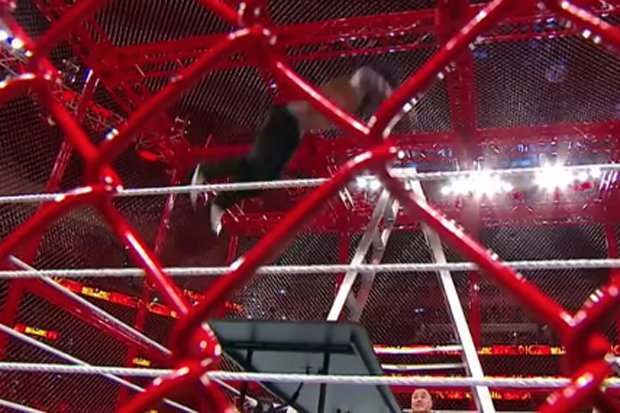 HELL IN A CELL: Jeff Hardy plunged 20 feet from the top of the cell to the ring (Pic: WWE)

Hardy – known for his daredevil antics – was attempting to dive onto Orton who was lying prone on a table in the middle of the WWE ring.

After climbing a ladder, he decided to attempt to use the cell as monkey bars to get more height for his jump.

The Viper dived out of the way however, and Jeff fell around 20 feet and crashed through the table.

Before the match had even finished, the cell was being raised as the 41-year-old was quickly pinned by Orton while paramedics rushed the ring.

Hardy appeared injured as he was lifted onto a strecher in a neck brace and rolled backstage to chants of "Hardy, Hardy" from the crowd.

The Charistmatic Engima is known for his high flying antics – often taking massive risks in his matches.

He had even promised his debut Hell in a Cell match would be "memorable" in an interview before the event.

WWE fans do fear for his career however, with Hardy known to have suffered numerous injuries – and even himself admitting he is slowing down.

WWE: Jeff Hardy fell from the top of the cell through the table (Pic: WWE)

WWE tweeted: "Victory for Randy Orton as Jeff Hardy has seriously crashed and burned in his first Hell in a Cell match."

One wrestling fan said "one of the most brutal cell matches of all time" and another added "that match was incredible, the finish was genius".

Others added "holy hell – that was so brutal" and "give Jeff a good rest before he kills himself".

"Now that's a real Hell in a Cell match" another said, and one added "he fell really hard, we all knew he would do something crazy".

JEFF HARDY: The Charismatic Enigma fell around 20 feet through the table (Pic: WWE)

RANDY ORTON: Jeff Hardy and The Viper's match was brutal – including a spot with a screwdriver (Pic: WWE)

Speaking before the match, Hardy said: "I've talked about it a lot because the one thing I've never done in WWE is a Hell in a Cell match.

"And now here we are. I'm in a Hell in a Cell with Randy Orton and I can't wait to see what I can do inside that cage.

"It's going to be very memorable and I'll do something that people won't forget.

"I think my thoughts are too big for my size sometimes, but I've got a lot of good ideas of what I can do inside that structure and this Sunday is when we find what will happen."

STRECHER: Paramedics attend to Jeff Hardy as he lies prone in the ring after the fall (Pic: WWE)

Jeff is the younger of the two Hardy Boyz – who are one of the most iconic tag team duos ever to wrestle in WWE.

Together they have held tag gold 11 times and have competed around the world – and both also have enjoyed singles success.

The younger brother however has enjoyed more success in WWE, holding the World Heavyweight Championship twice and once claiming the WWE Championship.

Hell in a Cell kicks rolls on tonight – headlined by Braun Strowman and Roman Reigns in the cage with special guest referee Mick Foley.

Andujar Oliver on deletions: Fati went too far in the foot, and the foul on the Peak was even more dangerous, perhaps
Atalanta extended the winning streak to 11 matches, beating Sampdoria-2:0
Milner played his 536th game in the Premier League and was ranked in the top 5 of the League in games played
Barca midfielder Fati is removed in the Derby with Espanyol. He spent 5 minutes on the field
Suarez scored 195 goals for Barcelona and finished third in the club's top scorer list
Daniele de Rossi: People call Messi cowardly, but they are afraid to ask their wives for a remote control from the TV
Daniele de Rossi: Ronaldo is comparable to Messi in goals and trophies, but Leo's game is more fun
Source https://www.dailystar.co.uk/news/latest-news/730114/wwe-hell-in-a-cell-jeff-hardy-fall-randy-orton-injury-medics-stretcher?utm_source=feedburner&utm_medium=feed&utm_campaign=Feed%3A+daily-star-latest-news+%28Daily+Star+%3A%3A+News+Feed%29

Reasons to be hopeful: introducing the TUC's free organising conference

Being impersonated on social media left me feeling physically sick