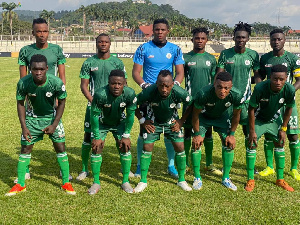 King Faisal Babes failed to take advantage of their home to beat AshantiGold SC in a matchday 20 fixture in the Ghana Premier League as they remain in the relegation zone.

They shared the spoils with a scoreless draw at the Nana Ameyaw Park in Techiman on Saturday afternoon.

AshantiGold tried to unlock the Faisal goalposts on several occasions but goalkeeper Danlad Ibrahim was too good to prevent all attempts.

Ibrahim was named man of the match after his exploits on his very first start for Faisal.

Faisal head coach Kasim handed a maiden to Danlad Ibrahim who is on loan from Asante Kotoko SC.

The Ghana U20 goalie made his debut last week against Aduana Stars coming on to replace injured Abdul Jabal Adams.

Amed Alim and Awudu Mohammed were also given their very first starts in the Green and White shirt.

Romain Folz, head coach of AshantiGold also made two alterations to the squad that beat Hearts of Oak 1-0 last weekend with Kwadwo Amoako coming back in the lineup.

Amoako replaced Samed Mohammed who picked a knock against Hearts following a man of the match performance.

Richard Osei Agyemang returned from suspension to take the place of Empem Dacosta.

The home side with an early attempt in the 3rd minute when Peprah's shot was greatly saved by goalkeeper Kofi Mensah to deny him.

Faisal came very close to opening the scoring in the 29th minute but Awudu Mohammed shot hits the woodwork.

The Miners also came close to getting the breakthrough as Stephen Owusu Banahene's effort missed by posts by inches on the hour mark.

US spacecraft carrying asteroid sample heading back to Earth